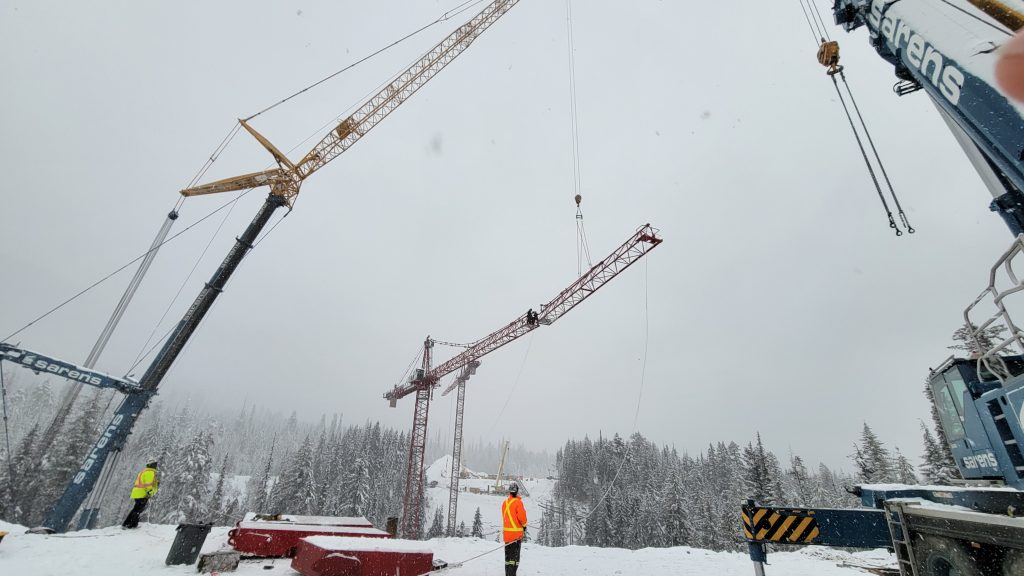 Roy Nelson and his Sarens Canada crew had completed a tower crane installation at a bridge construction site in Golden, BC. when some of the most extreme weather the province has ever experienced interrupted their plans to dismantle and return home.

Four days of intense rain this past November resulted in arguably the worst flooding ever seen in southern BC, decimating the region’s transportation network, wreaking havoc across much of the province, and leaving some cranes completely stranded even while others worked overtime to help restore order.

In the province’s more northerly reaches, the storm brought blizzard conditions, dumping more than two feet of snow in less than 24 hours. While the roads in Golden were cleared quickly enough, the route home to Surrey in the Lower Mainland was washed out by raging creeks and massive landslides. Nelson, the crew’s crane and rigging supervisor, was pondering travel options when the provincial transportation ministry issued a call for help, and he offered assistance with the company’s Liebherr LTM 1400 all-terrain crane.

“Within a day we were mobilizing up to repair Nicomen Bridge,” Nelson said, describing Nicomen First Nation’s sole link to the outside world cut off when a rapidly rising tributary of the Thompson River eroded the 150-foot-long bridge’s supporting embankments.

“One side of the road just disappeared,” Nelson said. “With one side washed away, the bridge just dropped into the creek.”

Nelson and his crew helped remove the bridge’s concrete panels, girders and piers piece by piece. Then, with roads open to nearby centres such as Cache Creek and Kamloops, components for a new bridge were soon on hand. Matting and other essentials were also readily available, as was motel accommodation. And, with Kamloops airport open, Sarens was able to rotate personnel and keep its all-terrain crane in action until bridge access was restored three weeks later. 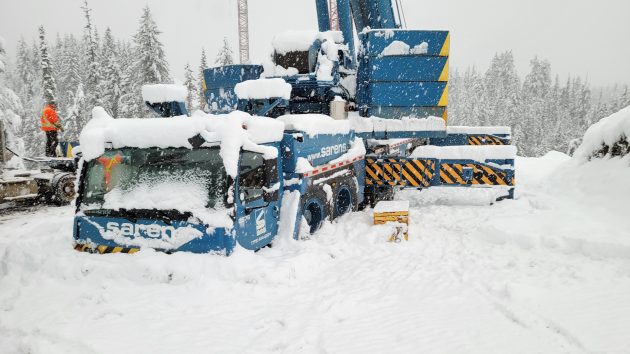 The storm surge brought heavy snow to central and northern British Columbia. In the Golden area, two feet of snow fell in less than a day, hampering removal of Sarens Canada’s Liebherr LTM 1400 all-terrain crane. The unit soon made it out and was used en route home at two storm-related emergency bridge projects. (Photo: Sarens Canada)

A reinvigorated Sarens team then drove further south to a section of Highway 1 demolished by rising waters at Falls Creek.

“A little stream washed out a whole section of road and rail — everything,” Nelson said. “I’d never seen anything like that before.”

Working in blizzard conditions, with avalanches shutting roads from time to time, crews set about building a temporary bridge to effectively raise the stretch of highway to higher, drier ground while the province develops a long-term plan.

Nelson describes the LTM 1400, with 500 tonne lifting capacity, as well suited for bridge work. While the loads themselves were less than one-fifth of the actual capacity, the crane’s utility lay in its reach in a challenging environment.

While the two job sites were along relatively isolated stretches, crews used satellite-based Wi-Fi to maintain consistent internet contact with engineers and other colleagues. Nelson explained crews had no difficulty undertaking all the usual safety and pre-engineering measures, retrieving archival data and drawings as needed.

With Nicomen Bridge, the project team reviewed data from the old bridge, and with both bridges they took measurements and collectively determined factors such as weights, reaches and angles.

“In all honesty, that was really easy,” Nelson said. “Our engineers stepped in, worked with the ministry, and drew everything up really quickly.” 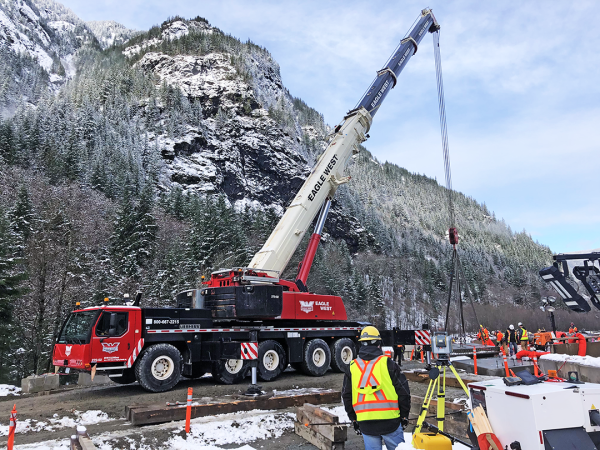 Down south in Abbotsford, where the flooding was particularly intense, Eagle West Crane & Rigging also kept busy. Business development manager Steve Anema says access was so hampered that operators living in nearby Chilliwack were unable to get to work and the company had to reschedule jobs so it could deploy personnel and equipment for emergency work.

One line of Eagle West’s business is supplying and installing concrete road barriers, and Anema said these were needed along the Coquihalla Highway, where some barriers were damaged and where sections had to be narrowed or even relocated due to landslides and washouts.

The company used Hiab 477 47-tonne-capacity folding cranes to manouvre barriers into place. “That was a big component of our work, to help contractors get the roads situated back for public travel,” Anema said.

On one section of the Coquihalla, Eagle West crews used a 270-tonne-capacity Liebherr LTM 1220 hydraulic crane to assemble deck panels and other bridge components during a rebuild that lasted nearly two weeks. The lifts themselves weren’t technically challenging. Rather, it was the significant snowfalls as the project carried on.

“The idea was to try to get ahead of the weather,” Anema said.

In Langley, RKM Crane Services was close to some of the worst flooding. While the company has nearly 30 all-terrain cranes and boom trucks suited to hoisting bridge components and debris, it was unable to partake in initial access restoration work because the town was surrounded by rising waters.

“We were handcuffed and landlocked because you obviously needed to get to a bridge in order to repair it,” said RKM general manager Matthew Blackwell.

As access opened, RKM was to able to get into the thick of restoration work.

“We’re part of a larger group that also does construction, so we’ve done a lot of work in the Lower Mainland with some temporary bridges and other installations to get the highways opened again,” Blackwell said. “Road building isn’t really where our market is, but helping to put in temporary bridges, girders, abutments and new decks is a big part of what we do.”

RKM crews used two LTM 1400 Liebherr 500-tonne mobile all-terrain cranes to remove entire bridge sections, and various mobile cranes to reset bridge girders and beams. “Once the girders are in, they would either put temporary concrete deck panels on the top or put a full concrete pour over the top of the bridge,” Blackwell explained. 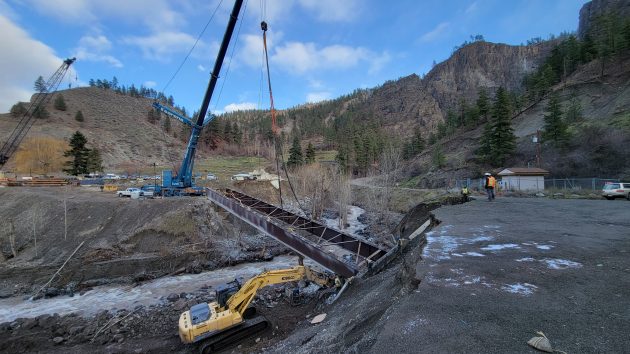 While the emergency work kept many crane service providers busy, the flooding wrought havoc with more routine jobs scheduled many months in advance. RKM had already parked mobile cranes at a tower crane install at a condo project in Chilliwack, but the two-storey excavation was filled to the brim when crews arrived to begin hoisting.

When the rainfall subsided, the construction team pumped the excavation out, made sure the shotcrete lining the excavation walls was intact and safe, and crews erected the tower crane.

Ryan Burton, managing director with Bigfoot Crane Company in Abbotsford, reported similar situations with excavations so badly deluged that shotcrete applied prior to the flooding could no longer be trusted to keep wall surfaces anchored and stable.

“They had lots of repair work to do before we could come in and set up our tower cranes,” Burton said.

Ironically, the various delays proved a mixed blessing for Bigfoot, as the company had been falling behind in its own scheduling due to stranded equipment and personnel.

“I’ve never seen rain like this in my life,” Burton said. “They called these atmospheric rivers, and it was literally like a river of water coming down. Some people were going up and down the freeway in their boats.”

“It’s not just one customer that’s been affected,” Sargent said. “It’s a trickle-down effect that starts in one place and keeps rolling.”

While the undertaking to restore access was significant on its own, the looming infrastructure rebuild stands to be enormous because the province wants tighter standards as severe weather become increasingly commonplace.

Ian Pilkington, chief engineer with the BC Ministry of Transportation and Infrastructure, said he anticipates the longer-term rebuild of roads, bridges and rail will likely be one of the province’s biggest infrastructure builds ever, with costs potentially into the billions of dollars.

“We just had a huge event a couple of years ago in the Caribou, with probably more than $100 million worth of work, but this one is pretty huge,” Pilkington said. “I’m thinking, once the final bill comes up, that this will be probably our biggest rebuild.”

Pilkington said tendering and procurement could begin as early as this spring, but it’s difficult to put an exact timeframe on longer-term rebuilding because of potential further weather-related disruptions, including a strong springtime mountaintop snowpack melt.

As well, Pilkington said longer-term rebuilding requires considerable planning and engineering to address anticipated climate change expectations, and his ministry has been working with Engineers Canada and Natural Resources Canada in efforts to develop risk assessments and analyses that are forward looking and anticipatory.

“We’ve learned we can no longer rely on historical data,” Pilkington said. “We have to look at ‘future’ data our designers can use to help account for climate change.”