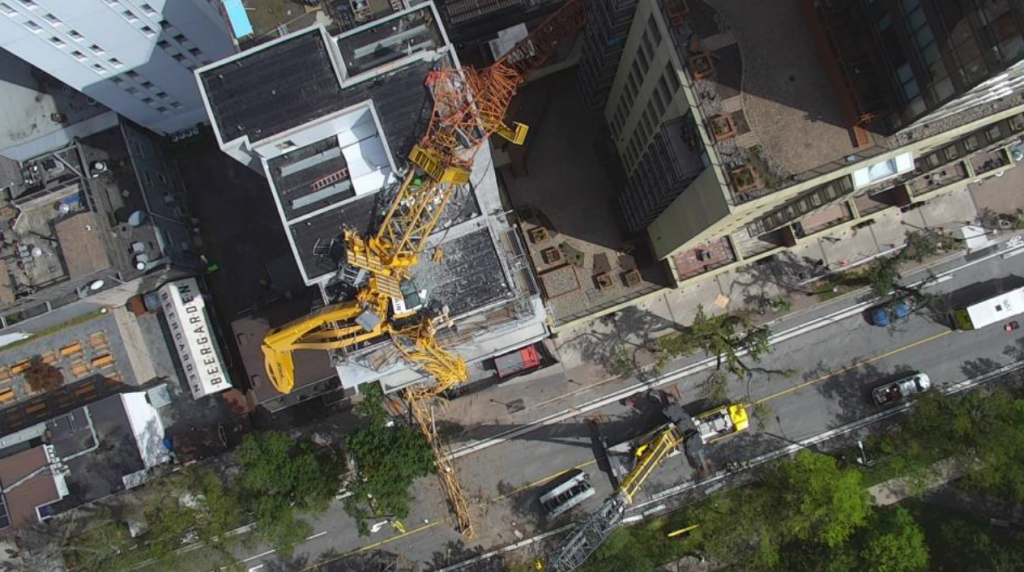 A weld failure caused a crane to collapse during a tropical storm in Halifax, according to a new report from Nova Scotia’s Department of Labour and Advanced Education.

The crane came down on Sept. 7, 2019, as the city was being hammered by the remnants of Hurricane Dorian.

The winds at the time of the catastrophic collapse were recorded at 97 km/h to 107 km/h. There were no injuries, but there was significant damage to public and personal property — including destruction of the crane.

The crane, a Manitowac Model Potain 8520P tower crane, was installed on Jan. 7, 2019. It was owned and operated by Lead Structural Framework and was erected at 1452 Brenton St. in Halifax. It was being used to build a multi-storey residential building.

It was a freestanding crane with a height of 73 metres, or about 240 feet.

Problems at the top

On June 4, 2019, the province’s Safety Branch was notified by the general contractor that the turntable at the top of the tower crane had seized, preventing it from “weather vaning” when subjected to wind loads, the report from the province said.

“Weather vaning is the ability of the crane to rotate freely into the wind when not in use,” the report states. “This is intended to reduce the effect of the wind on the structure.”

The contractor said the top section of the crane, including the cabin, turntable and jib, would be repaired or replaced. Removal of the affected sections took place on June 7, 2019. A new transition section (manufactured around 1974) was installed on June 17, 2019. It allowed for proper weather-vaning.

At the same time, a newer Potain MDT 268A model turntable, cabin and jib (built in 2015) were installed on the old tower section. All required test and certification documentation was then provided to the Safety Branch.

OHS officers visited worksites with tower cranes in the Halifax area on Sept. 6, 2019, because of the impending storm and expected high winds. The officers visited the site at 1452 Brenton St. to remind owners and operators to “properly prepare cranes for wind conditions,” the report said.

“On the same day, the chief crane inspector provided letters to crane owners and operators reminding them of the requirement to properly prepare cranes for wind events by ensuring they are able to turn freely in the wind and align themselves with the direction the wind is blowing,” the report said. A copy of that letter was sent to the crane owners at 1452 Brenton St.

At about 4 p.m. on Sept. 7, 2019, the tower crane collapsed in a north-west direction, striking the top corner and a balcony deck of the Trillium Building.

It came to rest on the Olympus Building, a neighbouring 13-storey building under construction. The top three levels of that building were heavily damaged.

Counterweights from the crane came crashing down onto a nearby sidewalk and street, causing significant damage. Several businesses and residences were evacuated as a result. 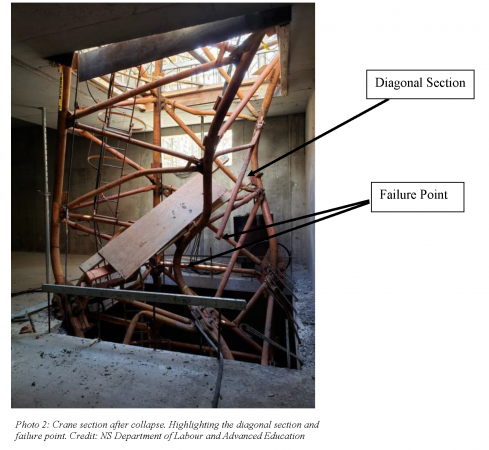 Image from the Department of Labour and Advanced Education’s report.

Investigators quickly identified a possible cause of the collapse – “a possible failure point was initially identified in a lower mast section at the northwest corner of the crane tower,” the report said. A hollow diagonal tube had become separated from a solid vertical post at a point where it had been previously welded together.

BMR Structural Engineering was hired by the province’s Safety Branch to conduct a review. It found that:

Further, a metallurgical testing report on the broken area found there was a lack of fusion, corrosion, pores and a crack — which propagated from the inside diameter to the outside diameter of the area of the weld.

The report left no doubt about the role of the bad weld in the collapse.

It was “a result of the failure of a weld where a diagonal tube had been connected to a vertical member of the crane mast between six and nine metres from the base. The weld failure caused the diagonal tube to separate from the vertical member of the mast, transferring the weight supported by the mast’s four vertical posts to only three of its posts, causing the tower section to rotate and fall.”

It also said the tower crane owner and operator “met the applicable legislative and regulatory requirements to prevent this event from occurring and no further regulatory action will be taken with regards to the collapse of the crane.”