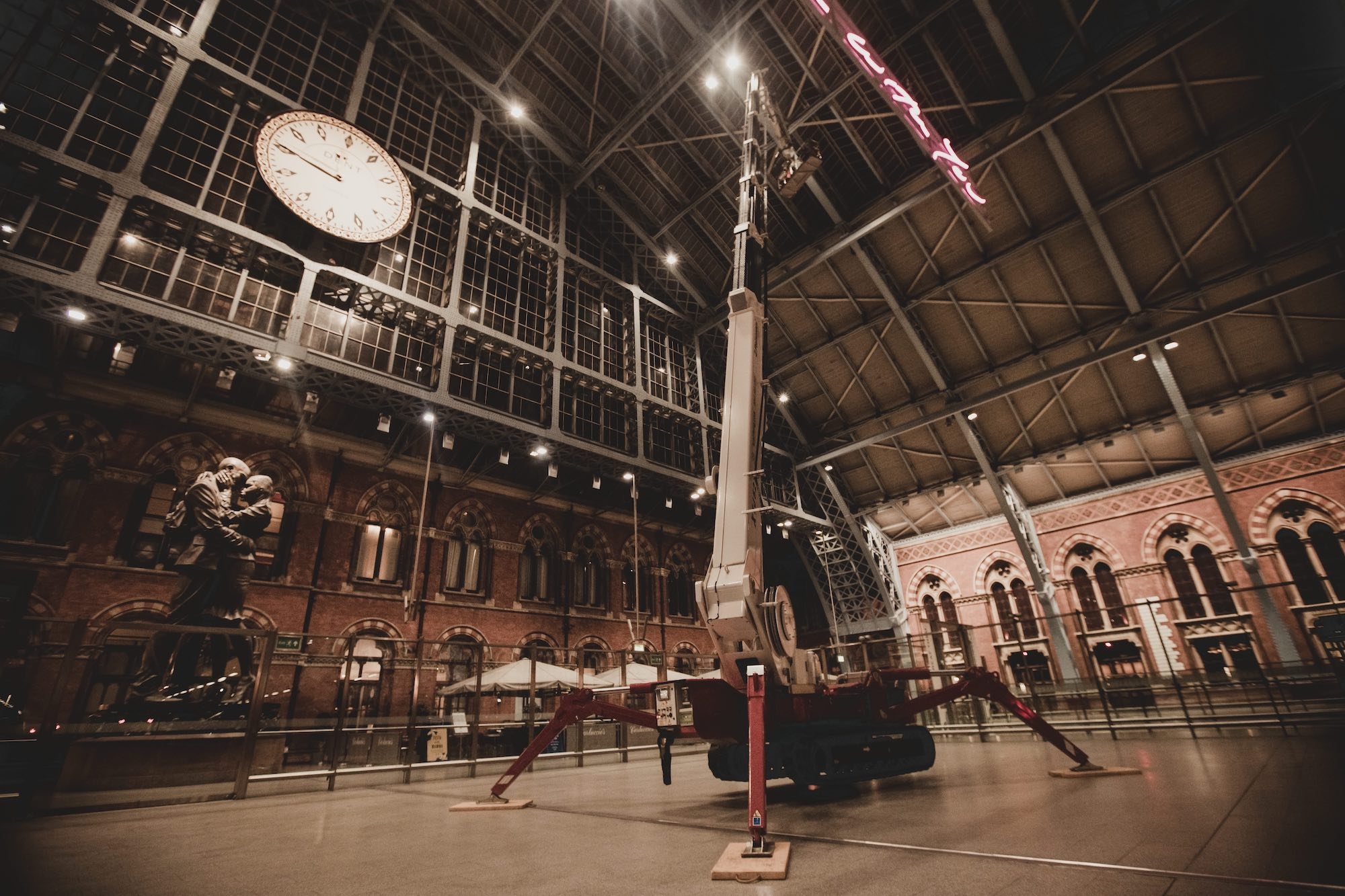 July 8, 2019, London – TCA Lifting has supplied their Palazzani XTJ52 for a major concourse re-lamping project in the ‘Barlow Shed’ station.

Designed by George Gilbert Scott and William Barlow, St. Pancras Station opened in 1868 and has become one of London’s most iconic buildings.

In later years the buildings fell into repair and would have been demolished but for a campaign by Sir John Betjeman who campaigned to save St. Pancras station from demolition in the sixties stating that ‘it would be a criminal folly to destroy a. building whose name conjured up wondrous images of architecture and light in the mind of every Londoner.’

His campaign was successful, but it wasn’t until the 2001 that the redevelopment work, designed by Sir Norman Foster and later modified by Rail Link Engineering’s chief architect Alistair Lansley, began to restore the station to its former glory.

Following the £800 million refurbishment, the renamed St. Pancras International’ was opened by Her Majesty Queen Elizabeth II in November 2007. TCA Lifting supplied a large number of spider cranes and powered access equipment during the construction works and subsequent maintenance. They even helped with the install of a temporary clock before the new Dent clock was installed.

More recently TCA Lifting has supplied their Palazzani XTJ52 for a major concourse re-lamping project in the ‘Barlow Shed’ station. XTJ52 is a record beater – it is Europe’s highest spider with an incredible 52m working height, 19.5m radius and capable of lifting 4-persons (400kg SWL). At less than half the weight of an equivalent traditional self-propelled MEWP, the Palazzani XTJ52 offers the low ground loadings essential for working inside the station.

Despite its low weight it is an incredibly strong and stable machine ensuring maximum safety for the operator. One of the most useful features for gaining access to the lighting is the articulating three section telescopic jib, which allows the operator to position the basket with great precision.

Powered by an efficient, silent-pack diesel engine or an environmentally friendly, yet powerful, 380V electric motor the XTJ52 is suitable for use inside or out. Its large, adjustable width, rubber tracks transmit a low floor loading and the three, fully proportional, drive speed modes ensure full control at all times.

For ease and speed of use, its synchronized articulation & simultaneous lowering of the outriggers allows for a quick set-up on all surfaces including uneven ground and slopes.

Transformer – By removing the basket and replacing with a winch, the XTJ52 can be quickly
transformed from Europe’s highest reaching ‘spider platform’ to its highest lifting ‘spider crane’ able
to lift 500kg to a height of 49m and to an impressive 16.5m radius.