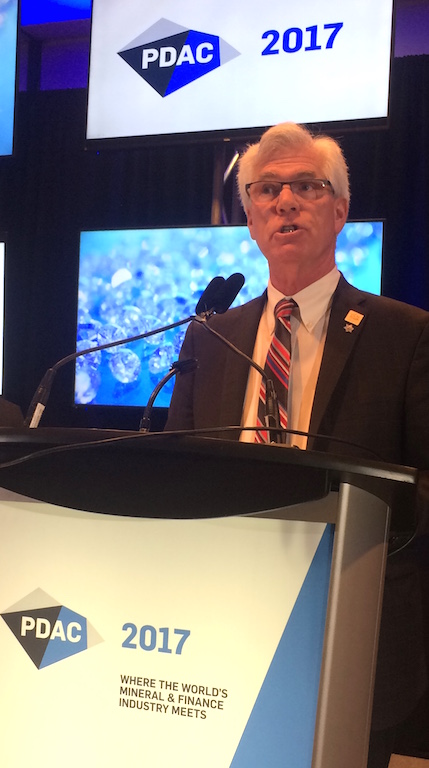 With talk of a slow

Ian Simmons, a base manager with Heli Explore Inc., had good reason to smile as he staffed the Quebec-headquartered company’s booth at the 2017 convention of the Prospectors and Developers Association of Canada this March in Toronto.

Thanks to depressed commodity prices and economic and political uncertainty, prospectors and mine developers have found themselves between a rock and a hard place. However, a sense of optimism prevailed at the Metro Toronto Convention Centre, with talk of a slow, gradual recovery.

The annual event attracts thousands of prospectors, developers, mining companies, financiers, analysts and politicians from across Canada and around the world. Technical and business workshops, swanky cocktail receptions and dinners, and an expansive trade floor multiple football fields in size were ripe for networking and speculation about the next big opportunity.

Heli Explore — which has its main base in La Sarre, Que. — supplies helicopter services to an array of sectors across Canada, from forest firefighting to hydroelectric facilities, lifting everything from people to heavy machinery. Helicopters can generally carry up to 2,000 pounds at a time, so for miners and prospectors a 20,000-pound drill rig might be disassembled into 10 loads for transport from an air strip or roadway to an exploration site.

When slow, choppers first to go

Simmons — who manages the company’s secondary base in Sudbury, Ont. — said he’s witnessed the slowdown firsthand.

“If the economy is low, the first thing to go usually is helicopters,” Simmons said. “Helicopters are expensive to operate, and as far as exploration goes helicopter time will probably chew up most of your budget.”

Still, Simmons concurred with the convention’s sense of cautious optimism that markets seem to be recovering.

“It hasn’t been a major jump, but people are starting to invest more into exploration again, which brings the business back for us again,” he said.

Martin Turenne, president of First Point Minerals in Vancouver, expressed hope for his company’s flagship Decar nickel project in central B.C. “We think it’s one of the very few advanced-stage nickel assets that has the potential to go into production in the next up-cycle for the nickel market,” Turenne said.

Asked when this next up-cycle might get underway, Turenne hesitated to venture a prognosis. “That’s crystal ball stuff. At some point in the next several years the nickel price has to go up. The spot price is well below the average cost of production in the industry right now, and the fundamentals are lining up well from a supply-demand balance standpoint that’s going to be positive for the nickel price. But at what rate the nickel price goes up and when that happens — we can’t say.”

First Point Minerals accesses its Decar site via logging roads, so it’s not a potential helicopter user. And, while cranes are common in the construction and operation of mines, Turenne doesn’t anticipate any action until at least the early 2020s.

“Right now it’s all pretty small scale stuff, pickup trucks and the like,” Turenne said. The company doesn’t even own exploratory drills — it farms this out to specialist contractors. “When we need trucks or equipment we obtain it on a lease or rental basis.”

“It was discovered in late 1800s and has undergone a couple production exercises,” Anaconda vice-president Allan Cramm said, expressing optimism for gold markets.

“We’ve gone through some record gold prices but it’s been sitting idle. We see an opportunity to apply some of the experience that we have in open-pit and underground mining to make it successful.”

Grove on job in Newfoundland

Anaconda’s Newfoundland operations perhaps typify the modest-size mine’s use of heavy equipment. The largest crane on-site, a Grove rough-terrain of about 80 tons, is used to move materials and components around as needed.

Like many “junior” miners, however, Anaconda retains outside contractors to supply heavy machinery. “In our case it’s a better utilization of capital,” Cramm said, explaining a desire to avoid risks that come with ownership. “The contractor uses equipment that can be used in the construction industry, so when projects are finished the equipment can find a new life in construction,” he explained.

“I remember 2007-2008 before the collapse — these were great times,” Lapierre said. “Right now, the economy could be better. But the base metals are starting to turn around. There’s more money on the street for good properties. People are a lot more upbeat.”

Rockcliff Copper also contracts for heavy equipment. “I don’t like the overhead on it, so I hire them to do the work,” Lapierre explained.

Northwestern Ontario’s Ring of Fire, an exploration zone touted as Canada’s biggest up-and-coming mining hot-spot, is very much the proverbial canary in the coal mine for assessing prospects.

The kettle’s been simmering for more than a decade, never quite coming to a boil as governments, First Nations and companies with stakes in the area grapple with land rights and a complete lack of transportation, electrical and telecommunications infrastructure.

Noront Resources and KWG Resources have stayed the course, exploring for chromium, nickel, copper and other mineralized rock in anticipation that the hurdles will soon be overcome. However, other smaller players have departed, with investors wanting more immediate riches.

Construction of regional infrastructure, as well as crushers, mills and other mine facilities, would create considerable demand for heavy equipment. But, John Mason, mining services project manager with the Thunder Bay Community Economic Development Commission, said it’s a waiting game for now.

“We’ve gone 10 years and time keeps ticking,” Mason said. “I’m an optimist, but risk capital doesn’t hang around forever. Quite often there’s a shelf life to these projects in terms of the willingness to develop.”

The far north is perhaps Canada’s most fertile ground for exploration and mining. With four properties in the Yukon’s Dawson Range, Vancouver-based Trifecta Gold is positioning itself as proximate to the country’s most legendary success stories.

“The majors are interested in this area, and we want to make a big discovery and get it to a point where one of them buys it,” said Trifecta president and CEO Dylan Wallinger.

Wallinger and Trifecta have sought to establish strong relationships with First Nations and other stakeholders. He’s also paid attention to the equipment his sector relies upon to get work done. “Two of our projects are road-accessible, but two others are fly-in, only,” he said, detailing the use of helicopters to move heavy drills distances of up to 40 kilometres.

“We work with a couple different companies,” Wallinger said. “They’re busy in the summer, for sure, but they’ve been up there for a long time and it seems like they’re just chugging along.”

This year’s convention came at perhaps a propitious time for a sector with a reputation for brash, wild-west craziness.

“Mr. Trump’s doing a wonderful job,” declared Ottawa-based prospector and geologist Donald Brown. “Every time he lies he creates uncertainty, and he lies at least once a day. And this means that gold will go up incrementally with time.”

Brown, 82 and a perennial at PDAC, was hoping to persuade investors to buy into properties he holds in northwestern Ontario.

“I did some deals five or six years ago but the last few years have been an absolute drought,” Brown said. “But I’m hearing that it’s starting to ease up, that the juniors are starting to raise money. In Val d’Or (Quebec) you can’t find a driller. They’re all busy.”