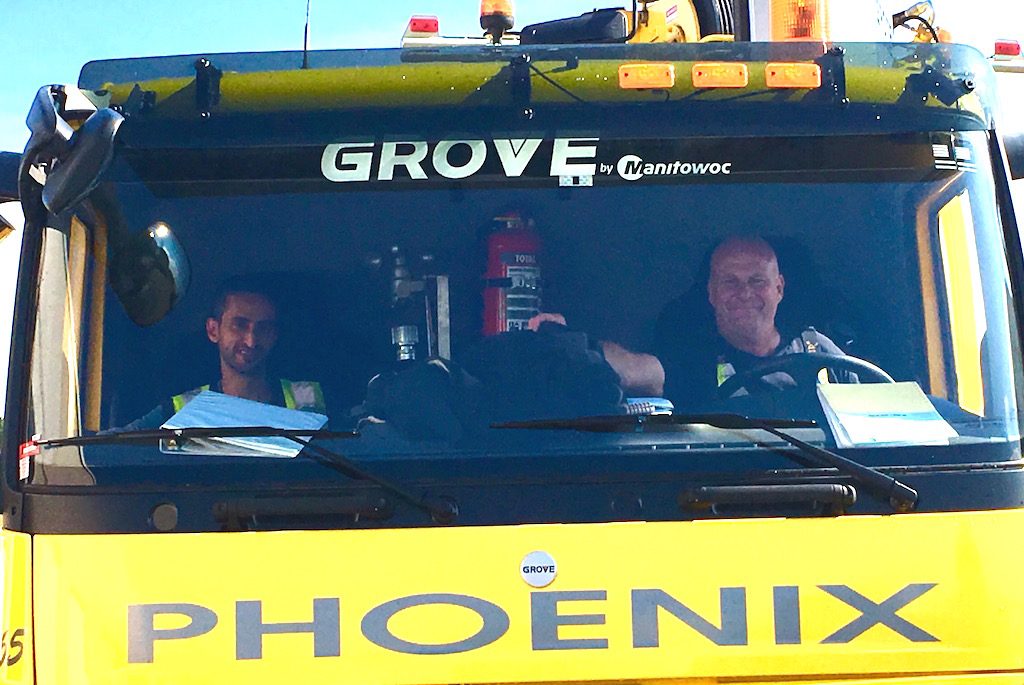 Mohamad Chikh Neameh never believed that war could come to his native Syria.

“My country is beautiful,” said Chikh Neameh, who is now working for B.C. company and aspires to become a crane operator. “We had a community where everyone was like brother and sister. We loved each other there.”

After the Syrian Civil War did break out in 2011, Chikh Neameh had to flee with his wife and children from their home in Damascus.

“We lost very many people there,” he told Crane & Hoist Canada. “We lost friends. We lost neighbours. That’s why we came here.”

After he and his family spent three years in Jordan, the United Nations High Commission on Refugees offered them a chance to move to Canada.

“I said yes, because I heard Canada was very good and had very good people,” he said.

His first year in Canada was not without challenges. While he was struggling to find work, an apartment fire drove the family and nine other Syrian refugee families from their homes. In the media coverage of the fire, Chikh Neameh made an impassioned plea to the community.

Pleading for a chance

“On the news, they asked me what do you want so people can help you, and I told, we don’t need help, we need work,” he said. “We are coming to here forgetting our lives after war. Give me a chance to begin my life here.”

Bill Dick, owner of Phoenix Truck & Crane, was watching and soon gave Chikh Neameh what he needed — a job, performing a variety of duties in the company’s warehouse. The only barrier truly holding Chikh Neameh back was the language.

“You can tell talking to Mohammed, there’s some language difficulties for our company,” said Dick, whose company is based in Coquitlam, B.C.

Chikh Neameh made an immediate impression on Dick, as did Betul Nebhen, another Syrian refugee whom Dick hired to perform administrative duties and clerical work.

“I’m very impressed with Mohammed, he’s a very nice man,” Dick said. “And Betul is adored by everybody in the community. A very, very strong individual.”

The feeling is mutual. “I am very happy to be working at Phoenix,” Chikh Neameh said. “Mr. Dick is like an angel. He gave me a chance to prove myself.”

He hopes that other employers will also give Syrian refugees a chance. Back home, many Syrians had good jobs as professionals, however, their chances to find work in Canada are hampered by poor English skills.

Fortunately for him, Dick has been paying for him and Nebhen to attend English classes during company time.

“Mr. Dick offered for me to go to school for my English,” Chikh Neameh said. “My English is not bad. Not very good, but not very bad. But I am going to school and I’m better now.”

Chikh Neameh has since earned a forklift operator’s licence. When his English improves, his goal is to earn a crane operator’s licence and to operate one of the 50 hydraulic, all-terrain, folding and stiff boom cranes in Phoenix’s fleet. While the crane job may represent more security for his family, there’s something about the idea of performing big lifts that is very appealing to him.

Dick is thrilled to help Chikh Neameh with his professional development; however, he says that many other companies may not be able to help the same way Phoenix has.

“We’re very fortunate, we’re in a very secure position. We can afford to do this,” Dick said. “We’re willing to fork out the money to help them out, but I don’t know how many companies are in the same position that Phoenix is in, to be able to add on that expense.”

Dick said he contacted the federal government when it was first announced that 25,000 Syrian refugees would be brought to Canada to see if there were any programs or plans that could help businesses hire refugees. He was disappointed with the results.

“Justin Trudeau went to the airport, welcomed the Syrians, gave them a voucher for one year of government assistance and then walked away,” Dick said. “Then the year is up and I’m seeing Mohamad on TV saying he doesn’t want to be on welfare. He wants to work. The government should have some kind of subsidies for businesses to hire the Syrians, but they had nothing there. Give businesses an incentive to hire them!”

Related
Syrian refugees find a home on the Prairie
Tags