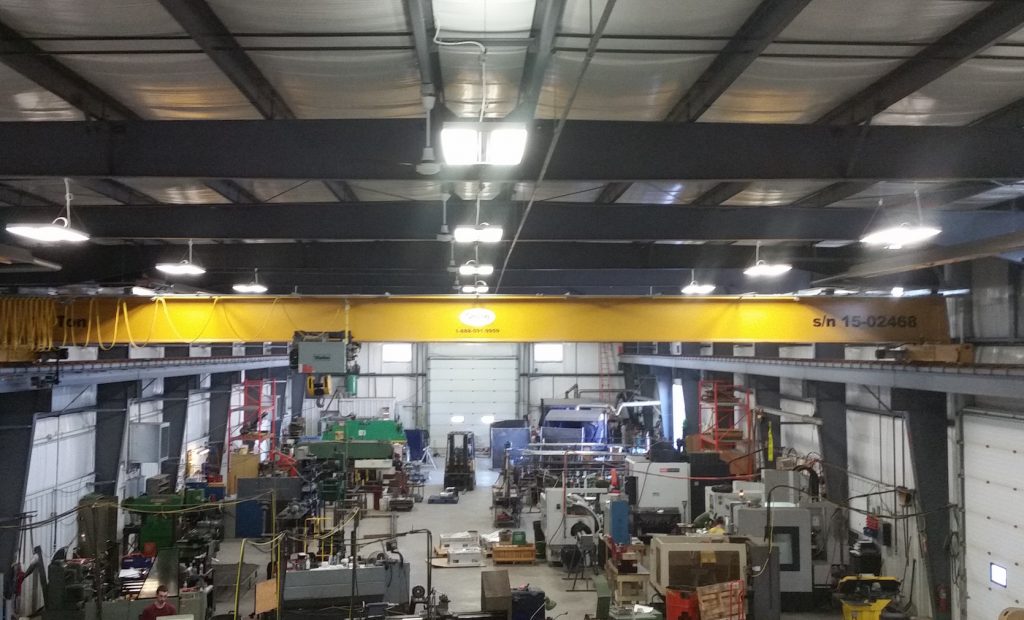 The addition of an overhead crane has paid dividends for a Dartmouth, N.S. machine shop. When Ace Machining outgrew its previous home base, the owners had a new 14,500-sq.-ft. facility built to their specifications, including the installation of a Yale Global King electric wire overhead hoist. Co-owner and co-operator Ron Wallace says that the new facilities and the new crane have not only provided the company with breathing room, but have allowed the business to grow.

“Before this we had 3,800 square feet and we were kind of bursting at the seams,” says Wallace. “We’d spend an hour at the start of the day moving stuff in the parking lot before we get started and an hour at the end of the day putting it back in. When we designed this one, we wanted it long and narrow. It’s 60 feet by 240 feet and we were adamant that we have an overhead crane running the entire length that traversed everywhere. Since moving in here, we’ve hired seven new employees. The growth has been fantastic.”

Ace Machining often work with large deliveries of metal, either in 20-foot lengths of round bar or in plate form. In the previous shop, unloading was a process that involved up to five employees carrying the metal on their shoulders. Actually maneuvering the metal in and out of the various machines was usually a multi-man job as well.

“Now one guy grabs the crane, lifts it up and we move it over to the side,” says Wallace. “Same thing if a plate comes in; magnet and pull the plate off of it. We’ll load a lot of heavy round shafts in and out of lathes. We use the crane a lot for changing the chucks on the lathe. We came up with our own design for a “chuck-picker-upper” that you can mount in the chuck, tighten the chuck up on it, bring the crane down, grab the eyelet in it and pull it off and put it on the stand. I feel it’s one of our best investments, that crane.”

Wallace says that he could see the company adding a second crane in time – there is room in their new facility for another. At that time, the current 10-tonne capacity crane would remain near the rear of the shop with a newer, likely 5-tonne capacity crane in front to help with smaller and lighter lifts. In the meantime, Wallace recognizes how much benefit the current crane has brought the company and is doing his best to ensure it stays in action for a long time.

“We keep everybody here trained up,” says Wallace. “We try to make sure all our lifts are straight up and down. Make sure the crane is all the way up before you traverse the room. We want the crane to last us a long time, so we stay up on the maintenance and training the guys.”

Wallace can’t imagine going back to the way Ace Machining used to do things. While he feels they were always safe, employees lifting large loads always carries a risk of injury. And from a productivity standpoint, when every operation could require 20 minutes of assistance from one or two other employees, that means each operation by one employee might cost 40 minutes of lost production from two others.

“Over the course of a year it adds up. The crane won’t pay for itself right away, but it certainly will in time,” says Wallace. “I couldn’t live without it. We’re certainly spoiled now.”