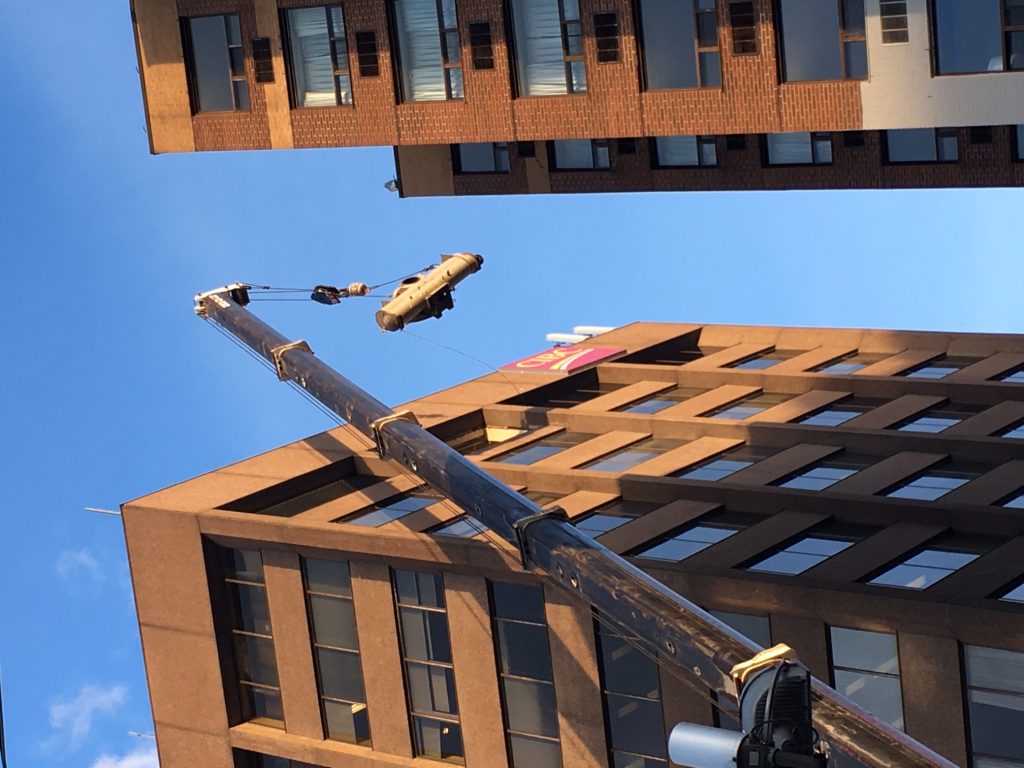 The old chiller inside the 14-storey CIBC building at Ouellette Avenue and Riverside Drive suffered electrical damage from a power surge in March, and property owner Mikhail Holdings opted to replace rather than repair the 45-year-old unit.

“It was working perfectly but it wasn’t efficient,” Mikhail Holdings’ facility manager Ron Nugent told Crane & Hoist Canada. “The new one will save us quite a bit on energy.”

The project to replace the chiller and rooftop water tower cost nearly $900,000, including materials, hoisting equipment and professional services.

The lift itself was also relatively conventional. Chillers are typically located either in basement or upper-storey mechanical rooms. In this case, the location was the 14th floor.

To get the old chiller out and install the new one, crews removed a large window and cut a few extra feet of the concrete exterior wall underneath to create an opening large enough to slide the old unit out and place the new one inside.

“We’ve had a couple of projects that were quite large and had actual roll-up doors to the mechanical room, and these were a piece of cake,” Goring said. “But on an office tower, typically, minimal thought is put into it. The owners typically spend money on other things.”

The first challenge was securing sufficient space to hoist the equipment. Ron Nugent said Mikhail Holdings gained permission to use an adjacent hotel parking lot because the company didn’t want to block a major artery.

“The whole area had to be blocked off because you can’t have anyone around the crane and outriggers,” Nugent said.

The project timing worked to everyone’s advantage because the hotel was undergoing renovations and was closed for the duration of the HVAC lift.

Good ongoing neighbourly relations are key, Nugent said. “They’ve actually taken some of our spots while they’ve been renovating so we we’ve been back and forth a bit. You have to work with your neighbours when you’re dealing with tight spots like this because it’s give and take.”

Another challenge was coordinating multiple trades. An HVAC lift might seem simple on paper, but this job required a crew of about 20 people from Mikhail Holdings, Johnson Controls, Moir Crane and Dielco Industrial Contractors, the latter supplying radio signallers and riggers.

“We had a ton of different aspects to put together,” Nugent said. “We also had to figure out how to get the crane in and situated in the right spot.”

“We ran two lines on the crane and hooked the old chiller with a choker on one end and pulled it out just so far,” McFarlane said. “Then we hooked the second line of the crane to the centre of the chiller to take it out and bring it down to the ground.”

Disassembling some of the old chiller’s components helped lighten the load for the 200-ton Liebherr LTM 1160-2 all-terrain machine.

Crews then raised the new 16,500-pound chiller using much the same rigging. Because the crane was deemed to have a lifting capacity of 21,700 pounds for this particular maneuver, crews added four-way spreaders to one line and hooked the other line to the chiller’s upper end.

“The challenge was trying to take the two lines up so one line didn’t drop off and damage the chiller while it was going up,” McFarlane said. “It was hard for me to see it, so we had radio communications and I just had them keeping an eyeball on it as I went up.”

Crews worked with the two lines and transferred the load from one line to the other to get the chiller inside the window.

“One was hooked into four spots on the chiller, so it picked all the weight all the way up there,” McFarlane said. “Then, when we got it started in the window, they hooked onto it with chain falls and started pulling on it to pulley it in so it wouldn’t come back out. Then I started coming up on the second line that was hooked to the end of the chiller, and I picked part-way up and then started letting down on the other line, and the chiller just sort of walked its way into the building that way.”

To remove the old cooling tower from a square, open-top cement room atop the roof, crews put nylon slings underneath it for safety. “Because of its age they didn’t trust the lifting lugs on it,” McFarlane said.

The new tower went up in two roughly equal pieces each weighing about 4,500 pounds, and when the lower end was placed on the roof the upper end was set carefully atop and then bolted onto the lower piece.

McFarlane expressed praise for the Dielco signallers because he was working from the crane’s cab at ground level and had no line-of-sight to the top.

“We had to maneuver around some pipes and antennas, but the guys on the radio were signalling me really well. It basically went straight up and then we swung it around and brought it down onto the roof.”

Gusty winds added to the overall challenge. With a stiff breeze, crews held off hoisting on the first day. But by the second day the wind’s direction changed and the crane and window were sheltered by the building, enabling the chiller replacement to proceed with relative ease. By the third day, the winds had calmed enough for the tower work.

Ron Nugent, who was present the entire time, said he was impressed by what he saw.

“We hire professionals for a reason,” Nugent said. “It was amazing how they could make that chiller move one-sixteenth of an inch when they needed to.”