Features Profiles
From the putting green to running big machines 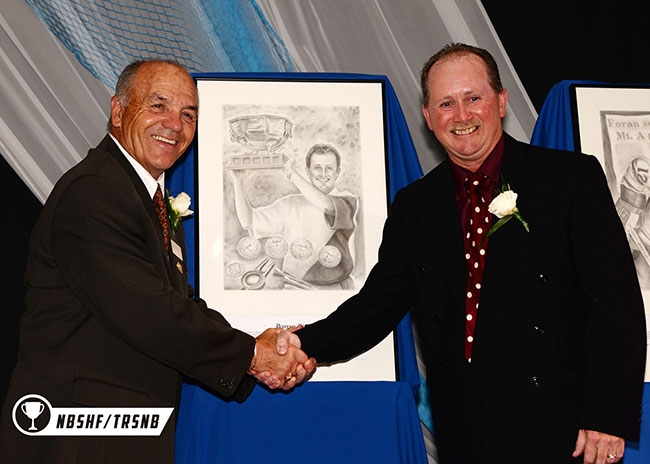 Clem Tremblay Darren Ritchie is a Canadian golf champion and

Darren Ritchie is a Canadian golf champion and, as of June 2016, a member of the New Brunswick Sports Hall of Fame. When operating the cranes on job sites with Irving Equipment, however, he says he’s just another guy in a hard hat.

“I like being just one of the boys and they accepted me as I am,” Ritchie says. “My golf is totally separate. I was very fortunate to be as successful as I was, but I want to be just as successful with my crane job as I was with golf.”

Ritchie’s path to golf started when his father put a golf club in his hand at age five. He played his first full round at age seven.

The highlight of Ritchie’s career was winning the 1992 Canadian Amateur Championships, besting future Masters champion Mike Weir in the process. Ritchie was also a member of Canada’s 1992 World Amateur Team, won the New Brunswick Amateur Championship in 1996 and 1997, and won over 40 invitational tournaments around his home province. However, as his children were getting older, he decided he needed a change and he found it in training for a career in heavy lifting.

Career change in order
“I took a little sabbatical as my kids were growing up; they were my priority,” says Ritchie. “It was weird going back to school at 40. You apply yourself a little bit differently. But I’m thankful they gave me the opportunity and it was a great career change.”

Currently working for Irving Equipment at a refinery in Saint John, Ritchie says one of his favourite aspects of the job is how quickly it changes and how every day he might be operating a different type of crane, depending on what’s needed. And he gets to utilize some of the same natural talents that served him well on the links.

“Hand-eye coordination was certainly a great help to becoming a crane operator,” says Ritchie. “You use it to make your lift better, of course. I love what I do. I love going to work every day. It’s amazing what these machines will do.”

Ritchie says one of his favourite tasks is a lift with a man in the bucket. It’s a great source of pride for him to have the trust and responsibility of performing such a lift.

Lifting also requires teamwork
“It’s amazing, the most critical lift you could ever do, having somebody in the basket and placing them within millimeters of where they need to be,” Ritchie says. “But you’re only as good as the guy giving you signals as well. No question, we work with a great bunch of people. It’s a great team to be a part of.”

It was also great to be part of the New Brunswick Sports Hall of Fame in Fredericton.

“Not too many golfers from our province are chosen. It was a great feeling. This province has put out many great athletes and to be recognized among them is truly amazing.”

Now that his children are a little older, Ritchie has begun picking up the clubs again. After nine years away from playing in individual tournaments, his wife talked him into playing again in June.

“I ended up winning the tournament. It was great to have her support. It felt just like old times. It’s funny, the butterflies were back in my stomach and they hadn’t been there for a long time. It felt really good to do that again.”