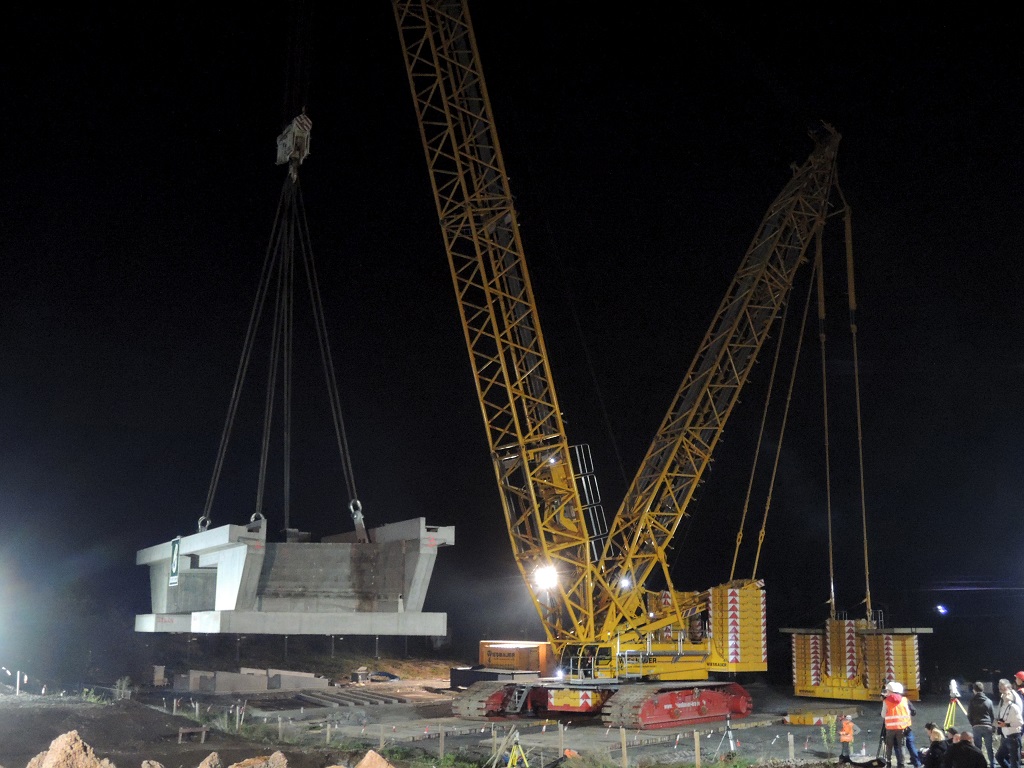 The crane had to move under load, which weighed over 400 tonnes, and company decided to use the Demag CC 3800-1 crawler crane, which had the needed lifting capacity and  the required level of reliability.

“Due to the fact that we had a tight timeframe of only 100 hours to tear down the old bridge and lift the new one into place, it was absolutely crucial not to have any delays in the lift whatsoever,” says Marco Wilhelm, project leader at Wiesbauer GmbH.

In order to eliminate potential uncertainties in advance, the team carried out a trial lift on the day before the job in order to check how they would be working with the load.

First, the Demag CC 3800-1 crawler crane had to be brought to the work site, where it would remain for a total of two weeks. The journey there took lowbed trailers, trucks and about three days. It took the four-person Wiesbauer team four days to set up the crane with the help of an assembly crane and a telehandler – a routine job for the experienced team, which had no problem putting together the SSL-1 configuration with a 54-metre boom length, 225-tonne counterweight, 50-tonne central ballast, and 325-tonne Superlift ballast.

Rigging the load proved to be a lot more complex.

“Due to the concrete element’s shape, the four attachment points had to be set up asymmetrically. In order to be able to use equally long wire ropes, we made the steel eyes used to attach the clevises with different lengths to compensate as necessary, and this enabled us to implement a symmetrical rigging geometry,” Wilhelm explains.

Moving forward while holding 403 tonnes in the air

The CC 3800-1 lifted the bridge element, with its gross load weight of 403 tonnes, from the pre-assembly area at a radius of 19 metres and to a height of four metres first. After this, the crane swung the load 90 degrees and moved it six metres forward towards the railroad line.

There, the crane operator aligned the element with another swing and finally placed the component exactly in the required final position.

“And so we completed the demanding job within the required timeframe,” says Wilhelm, “Working with Wiesbauer went as smoothly as anyone could wish for. For us, it was clear from the beginning that the only way this time-critical job was going to be carried out properly was with the right team and the right crane, and all while adhering to the work place safety requirements during this demanding job. And since we knew that Wiesbauer attaches as much importance to this aspect as we do, we knew they were the one to choose for this project.”