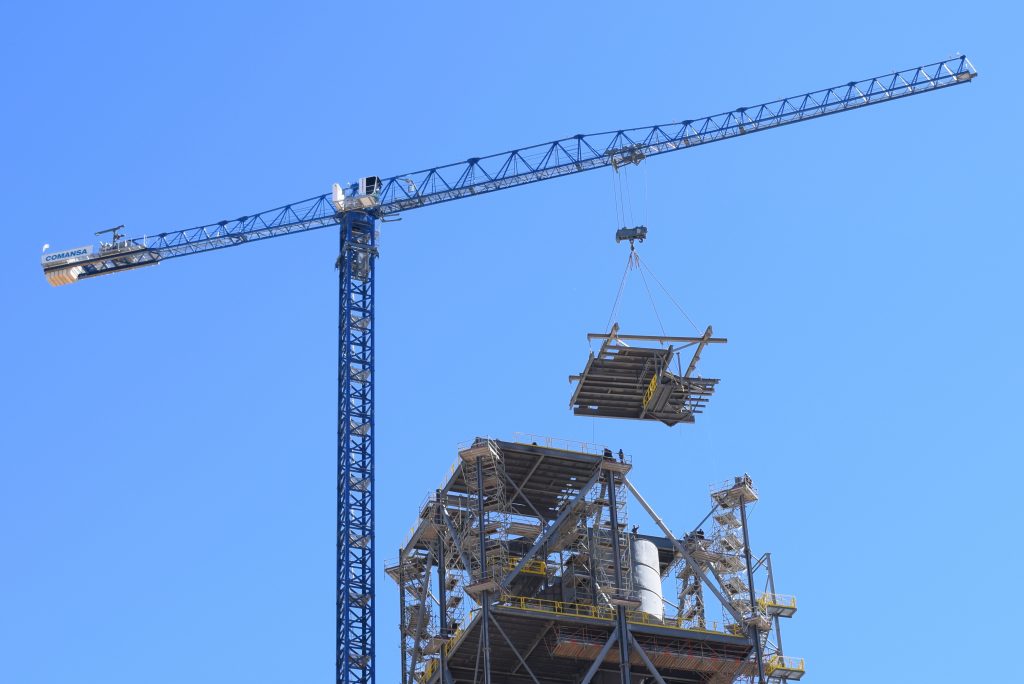 These large Flat-Top tower cranes increase their maximum load capacity up to 50 tonnes (110,230 lb.), among other improvements

The design of new solutions for the 21LC1050 Flat-Top tower crane, launched two months ago (September 2018), allowed Comansa’s R&D team to apply some of these developments to two of the manufacturer’s most successful cranes. Thus, models 21LC660 and 21LC750, mainly designed for large industrial projects, energy, mining and PPVC construction, improve their performance significantly.

During the design of the 21LC1050, space restrictions at construction sites that exist in some countries due to regulation were taken into account. That is why a highly modular counterjib was created for such model, which allows up to six different configurations according to the jib length. The advantages of this new counterjib and its good reception in the market encouraged Comansa to apply this design to cranes 21LC660 and 21LC750, which will improve the counterjib radius of both models when they are erected with reduced jib-lengths. Thus, when the 21LC750 crane is erected with a 50-metre jib (164 ft.), the counterjib radius is 25 metres instead of 31, of the previous design (82 ft. instead of 102).

Models 21LC660 and 21LC750 (except the 20t version of 21LC660) now feature a new optional hoist mechanism (132 kW – 177 hp), which allows speeds of up to 300 metres per minute (984 ft/min). Comansa also added the Effi-Plus system to the optional 110 kW hoist mechanisms (148 hp), available for all versions of such models. This system, which was already implemented in the other motors of both models, increases the hoist speed almost 15% with light loads. These two mechanisms greatly improve the productivity of the crane, especially when working at large heights. Both motors can have wire rope capacity of 720 or 1,570 metres (2,360 and 5,150 ft.), which allows these cranes to work with heights under hook of up to 785 metres (2,575 ft.).

To simplify and unify the range of tower sections, the 21LC750 now has the D36B as standard section. This mast is the same as that of the 21LC1050 Flat-Top and the LCL700 luffing-jib crane, and is fully compatible with the D36 mast section, with was the standard for the 21LC750 and will now be discontinued.

The “new” 21LC660 and 21LC750 cranes are now available worldwide and are shipped with the XL-size CUBE cab as standard. Thanks to its fully glazed front part and its spacious design, this new cab represents an important improvement in the productivity and comfort of the crane operator.

The 21LC660 and the 21LC750 cranes are two of Comansa’s models with best acceptance globally thanks to their productivity and competitiveness. These cranes have worked in projects in different countries such as Germany, South Korea, Canada, Angola, Singapore, Sweden, Qatar, Australia, Argentina, Hong Kong and Ivory Coast.

Few manufacturers offer tower cranes with 50 tonnes of maximum load in their range, and most of those cranes have pendant lines, with the disadvantages that this represents. In addition to the Flat-Top design, models 21LC660, 21LC750 and 21LC1050 offer the customer advantages such as the ease and safety of their erection and enormous versatility and modularity.

More information about Comansa in www.comansa.com.