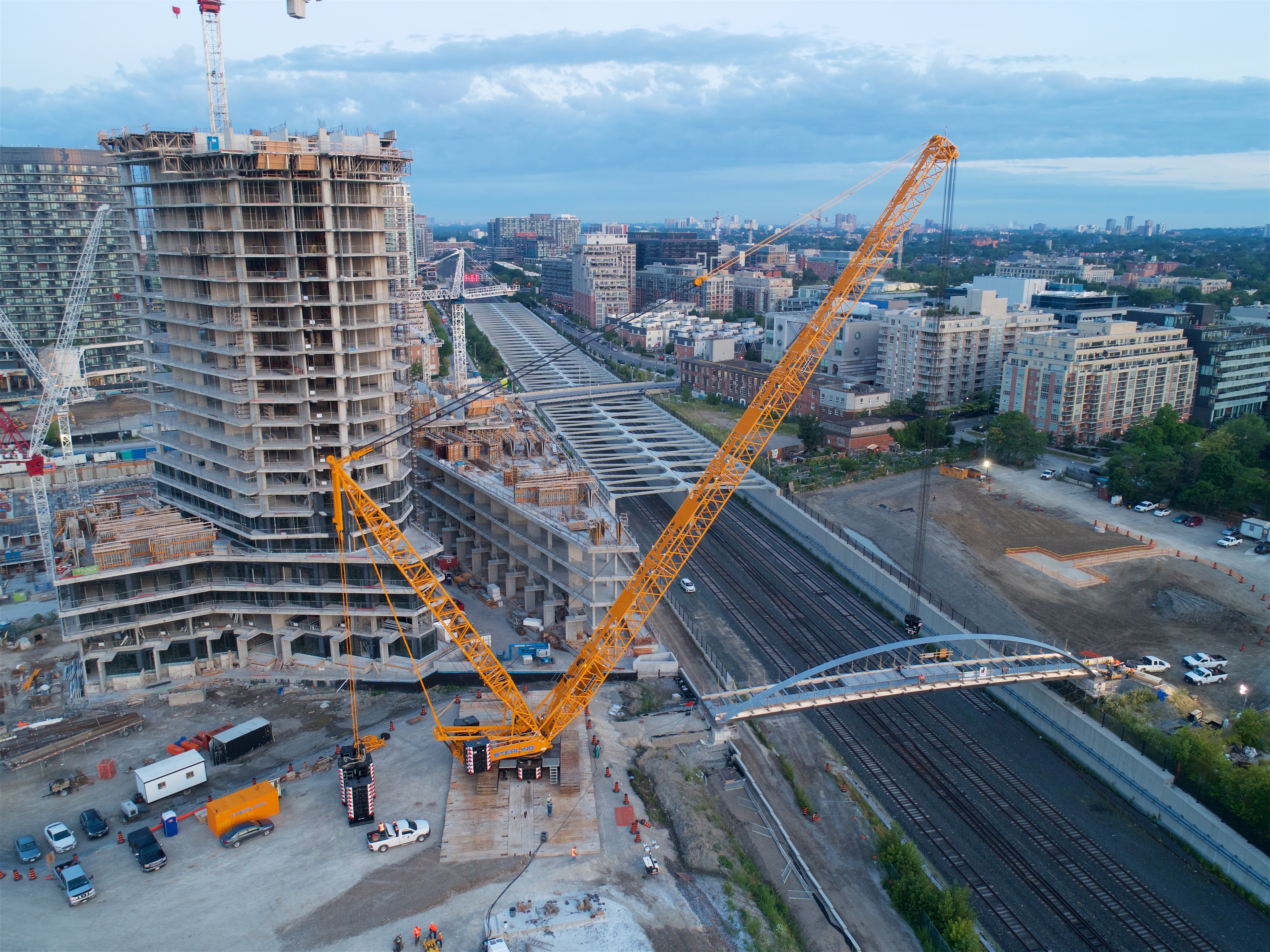 The new bridge is a result of ongoing efforts to build infrastructure for pedestrians and cyclists. In 2001, city council adopted the Toronto Bike Plan which includes a network of bikeways, and Toronto’s official plan supports links between parks and open spaces. In this case, Garrison Crossing will connect Trinity Bellwoods and Fort York, neighbourhoods long divided by two rail corridors extending westwards from Union Station.

“This major infrastructure project will not only create a new connection with great vantage points for the local neighbourhoods around King Street West, Liberty Village and Fort York, it will offer new ways for pedestrians and cyclists to move across the city,” said Mike Whelan, vice-president of major projects with  CreateTO, which is overseeing the project on the city’s behalf.

While the concrete decks and wooden handrails are fairly conventional for pedestrian bridges, the rest is made of stainless steel.

“Duplex stainless steel was chosen because of its exceptional mechanical properties,” Whelan said. “Aside from its unique and beautiful appearance, it is highly durable, lightweight, corrosion and weather resistant, requires less maintenance, and provides reduced life-cycle costs.”

The steel structures are relatively lightweight for bridges, but the totality of each of the two lifts — 130 metric tonnes for the north section and 125 metric tonnes for the south one — called for 600-tonne hoisting capacity. Because the lifts were scheduled nearly three months apart and cranes this size are few and far between, the team landed different, though similar-sized machines for each lift.

The south span was scheduled to be hoisted into place Sept. 22 but this was postponed until Oct. 13, weather permitting, in order to coincide with other work being done in the rail corridor.

For this second lift, crews plan to use a Demag CC2800 (SSL) with a similarly sized counterweight wagon, boom length and hook and block. The pick radius will measure 170 feet and the pick weight/work load capacity will be 266,720 lb.

Janine Turner, moved from WSP Canada to Stantec during the project and is vice-president of major projects, overseeing the bridge’s engineering, design and construction. She said the large crawlers are needed to hoist the spans and provide a 35-metre reach.

“Using a crane of this size eliminates railway corridor closures that would have taken place for several hours each night over several months,” Turner said. “It also eliminates preparation work which would have been required to enter the rail corridor.”

One of the biggest challenges has been preparing for the lifts. Each crane requires 32 transport trucks, four needing permits for wide/heavy loads, to transport its components from Sterling’s yard in Sarnia, in southwestern Ontario.

“Delivery to the site required significant and careful coordination that included planning the delivery route, arranging for police escorts, and coordination with surrounding development activities and ongoing events in the city,” Turner said.

The components of each span were assembled and welded off-site, with a smaller crane placing them on temporary abutments, to produce one arch and one deck for each span.

For the July lift, crews spent a little over a week on site using a 350-ton hydraulic crane to assemble the crawler. They followed up with several days of rigging checks and test picks in order to make sure the span’s pick points were correctly positioned and to adjust rigging lengths with custom extender plates and lift shackles.

“The bridge was lifted with one end being intentionally 25 millimetres low for a controlled ‘touchdown’ during erection,” said Steve Matthews, area manager with the structural steel and bridge division of E.S. Fox. “To the naked eye the bridge seemed to be lifted in a level state.”

Matthews said his firm and Harbourside Engineering Consultants did considerable pre-engineering to determine how the two loads would be safely and optimally handled.

“A full 3D independent model using material characteristics of stainless duplex steel, actual shop drawings with as-built material thicknesses, and inserted weld material masses were created to determine the precise centre of gravity locations of each bridge [span],” Matthews said, noting that centres of gravity varied because the spans are asymmetrical and the north one is slightly heavier than the south one.

The advantage of hoisting the structures from the centre ordnance is that it minimizes disruption to train traffic in the corridors, Matthews said.

“A shut down of the rail corridors is only necessary during the actual super-lift operation, one per bridge,” he said. “There is no need to install track level protection in each corridor, which can only be done on shutdowns. It also eliminates any risks of damaging the rail structures.”

The July lift began at the stroke of midnight. It took the crane approximately one hour to pick it up. The swing took about 30 minutes to occur, placement on the abutments took another hour and placement on the deck panels continued through the night. Crews needed favourable weather conditions and, with clear skies and a full moon, the lift was completed by sunrise.

A similar schedule is planned for the Oct. 13 lift, and Garrison Crossing is expected to open to pedestrians and cyclists in December.