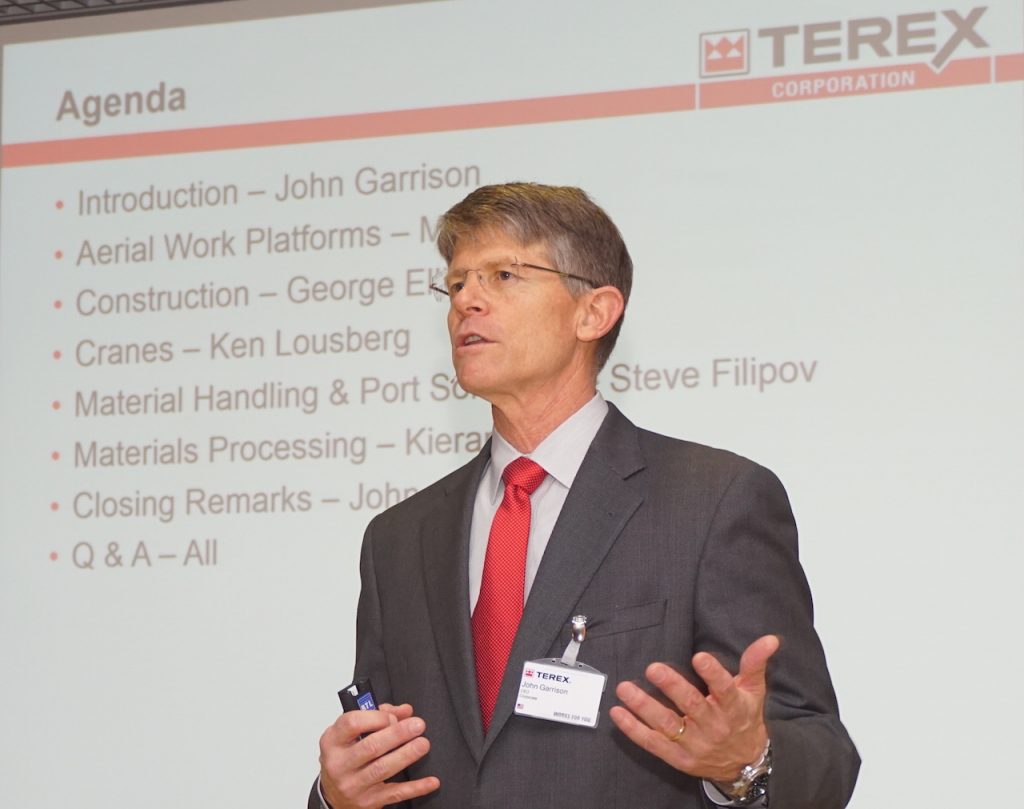 “There’s no doubt” that the global slump in oil and gas has affected the crane market in Canada, especially western Canada, the new president of Terex Corporation said during a press conference at the Bauma trade show in Munich, Germany this spring.

The downturn isn’t unique to Canada, however, John Garrison told reporters. That’s the case “generally around the world in our crane space, both North America and the Middle East, especially in the rough-terrain crane products,” said Garrison, who became president and CEO in November 2015.

At the previous Bauma in 2013, his predecessor Ron DeFeo said that Canada accounted for about 15 per cent of Terex’s North American business. That was significant given that in most industries Canada typically makes up about 10 per cent of market, a reflection of its population in comparison with the U.S. DeFeo was well aware of that dynamic, having served as an executive with Canadian-based Speedy Muffler King in the 1980s.

At this Bauma, Garrison said he had to be careful with his comments because Terex, a publicly traded company was at the time in a “quiet period” between the end of the quarter and its earnings announcement. However, he did speak generally about the economic situation.

“Now I did meet with some Canadian distributors as a matter of fact yesterday,” Garrison said at the April 13 press conference. “It’s a tough market but they’re planning for the future. We’re working with them on some new products and new product introductions as we talk about meeting their needs. So it will cycle back. But unequivocally right now, especially in western Canada, the impact of the oil and gas has had a pretty significant impact especially on the rough-terrain crane market.”

And that comment came a couple of weeks before a gargantuan forest fire forced the evacuation of Fort McMurray and nearby oilsands operations — a disaster that was the leading news story for several days in Europe.

In response to a followup question, Garrison said that a C$120 billion pledge in infrastructure spending by Canada’s new Liberal government, and a US$305 billion highway bill that the U.S. senate passed in December, “will clearly help.”

“The question is when and how much,” Garrison added. “Those two questions we don’t know. But we are strong proponents and do advocate strongly for infrastructure projects, basically around the world but especially in the United States and Canada.”

At the Manitex International stand, chairman and CEO David Langevin was remaining upbeat

about the Canadian market despite the downturn in the energy sector.

“Obviously we had a very nice run with everybody else in Canada on the western side the last two years,” Langevin said in an interview. “But clearly they have to absorb those cranes and absorb them all throughout the other industries in Canada. So I would say that it’s no different than the rest of the environment in Canada.”

His company had traditionally focused on the construction sector and was happy to break into the energy business.

“I can’t tell you how much fun it was to all of sudden have business in the energy side,” Langevin said. “I never had it before, so it was really a great experience.”

Other parts of the economy are now absorbing equipment that has become surplus to the energy sector, he observed.

“One of the things I always say is a 40-ton crane doesn’t care if it’s working on an energy site or a housing site,” Langevin said.

He expects other sectors, like housing, to pick up the slack — “because we’re not in a depression or anything like that” — but that will take time.

“So we just have to allow that to work its way through,” Langevin said.

Elemer Ivan of Toronto-based BIK Hydraulics — a dealer for Manitex, Sany and other brands — offered a similar assessment. “The downturn in the oil fields has kind of affected us quite a bit as it with everyone I’m sure,” Ivan said. However, he added, “The construction side is good in Ontario. We see steady business in Ontario.”

Edmonton not in a panic

A sign of the rough Alberta economy is that Vancouver-based Ritchie Bros. held a record-setting auction in Edmonton in late April — or so the Globe and Mail newspaper reported in advance of the sale, which did set a Canadian record.

A couple of weeks before that Edmonton auction, in an interview at Bauma, Ritchie Bros. CEO Ravi Saligram downplayed that connection.

“I think Edmonton has been growing for the last five years and this is just continued growth,” Saligram said. “Clearly there is a little dislocation in the Alberta market but I think I don’t see any panic from customers.”

Instead, Edmonton has become a regular channel for equipment dispositions that obtain good prices for Ritchie customers, he said. “And so that’s why it keeps building.”

Edmonton-based Flexx-Aire is also doing fine despite the oil and gas slump, vice-president Russ Scruggs said during an interview at his company’s Bauma booth.

“Yeah, oil and gas isn’t great but we’re one of the lucky ones that aren’t dependent on it,” said Scruggs, whose firm manufacturers reversible fans for diesel engines for heavy equipment including cranes. “So when it’s good, we get the peripheral benefit of it. But no, we sell globally and we lean on all sectors.”