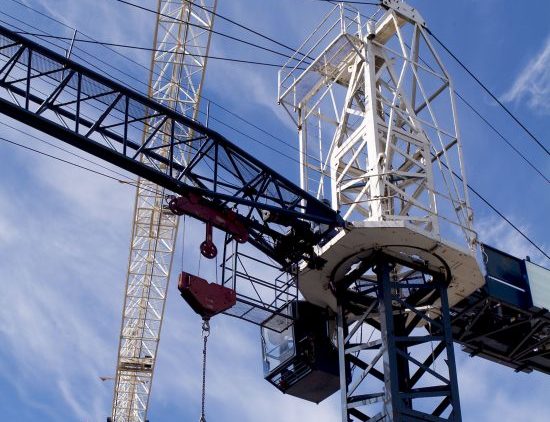 BC Crane Safety was established in 2005 to lead the development of a certification program for crane operators. Its mandate was to create an industry-supported model that would enable the enforcement of a new occupational health and safety regulation requiring British Columbia’s crane operators to hold a valid certificate showing that they are properly qualified.

“British Columbia’s crane owners, operators and employers came together in a big way to develop a unique certification program that has had a very positive impact on crane safety in the province,” says Clinton Connell, BC Crane Safety’s executive director. “The program was developed by and for people directly involved with crane operations and was designed to be maintained and revised in light of industrial changes, new equipment and emerging technology.”

What makes B.C.’s certification program different?  While documented training and “seat time” is important, the ultimate achievement that earns crane operators their certificate is an in-person demonstration of competency. Competency assessments are conducted at the operator’s worksite using the equipment they are used to operating. It is a real-life test of the operator’s ability and knowledge, much like a road test measures the ability to drive a vehicle. There’s nothing else like it in Canada.

The program also has a tiered structure that makes it possible for aspiring operators to enter the certification program at different points, and to migrate between classes of crane as they build their careers. Because operators tend to certify on the classes of crane that are in highest demand in their region and/or industry sector at any point in time, this also makes the program highly responsive to prevailing economic conditions.

The program is mandatory for B.C. crane operators. Although the province abolished all compulsory trades in 2003, BC Crane Safety certification or a recognized equivalent is required under the B.C.’s Occupational Health and Safety Regulation and is enforced by WorkSafeBC. All work performed on a jobsite using a crane must be performed by crane operators with a BC Crane Safety credential.

“B.C.’s program evolved out of the real-world experience of operators and was readily embraced. When it was launched, the response was almost overwhelming. BC Crane Safety received more than three times the number of people registering to become certified than anyone had expected,” Connell says.

What are the results?

To measure impact of the program, WorkSafeBC undertook a search of claim files to show the number of crane related time-loss claims between 2004 and 2018.

“In comparing the two five-year periods after the start of the program’s implementation in 2008, we find a significant drop in the number of workplace injury claims associated with classes of crane that require certification,” says Fraser Cocks, BC Crane Safety’s director of strategic initiatives.

Notably, the same finding did not appear when examining classes of cranes that do not require certification, such as gantry and overhead cranes.

Was the reduction due to a decrease in employment resulting from the 2008 financial crisis?

A review of labour market survey data showed that the reduction in injury claims was not due to a decline in crane operator employment that might have arisen due to the 2007-08 financial crisis. In fact, average total hours worked had almost doubled by the 2009-13 period. The number of crane incidents declined quite dramatically while employment hours were substantially increasing.

There are many industries that use cranes. Was this a general trend? If so, then factors other than the new certification program might account for these findings.

A comparison of injury and employment trends within some of the industrial sectors that use cranes showed that, over the same five-year periods, these sectors also saw a decline in time-loss claims. Yet, the reductions in crane-related injury claims surpassed the general reductions within these sectors by a notable margin.

Further examination of the data revealed that – as with crane operations – each sector saw a reduction in injuries despite an overall increase in total hours worked. However, in the primary resources sector, at least some of the initial reduction in injuries could be attributed to a decline in employment from 2009 to 2013.

“Looking at these comparisons, although independent efforts within these sectors to reduce injury claims have had success, we can clearly also conclude that the general reduction of crane-related injuries had much to do with B.C.’s mandatory crane operator certification program,” Connell says. 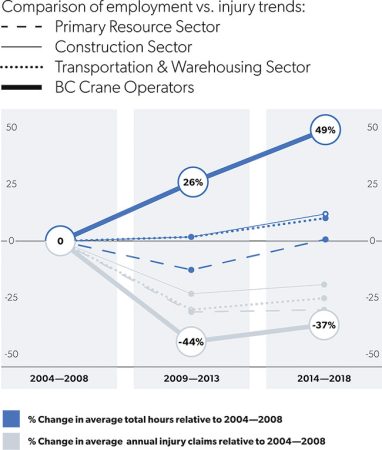