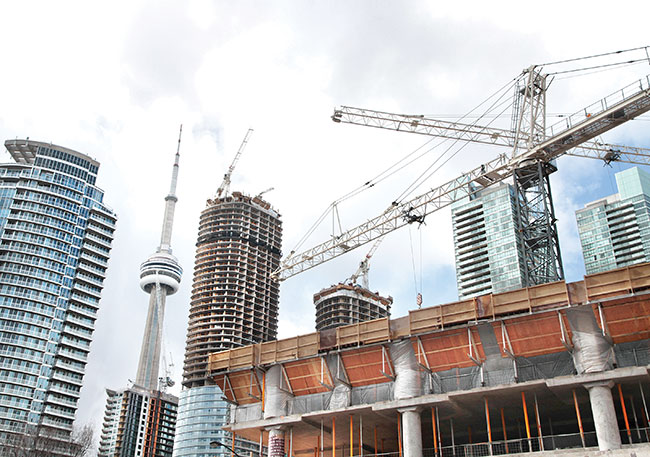 Toronto is leading North America in its crane count, according to the Q3 2021 report from Rider Levett Bucknall (RLB).

The RLB Crane Index for North America, published biannually, tracks the number of tower cranes in use in 14 cities across the continent.

Residential and mixed-use projects account for the majority of projects. Some of the ongoing projects include United Building Condos and an 85-storey hotel, condominium and retail tower called The One.

Also on the horizon is more infrastructure: the Ontario government recently announced a $60-billion investment on 38 new projects.

The other Canadian city on the index, Calgary, saw a slight drop in its number of cranes as key health care projects wrapped.

“The transportation sector keeps pace with the construction of new roads and bridges; the $4.9 billion Green Line LRT project is the largest infrastructure project in Calgary’s history.”

Toronto, Los Angeles and San Francisco all experienced an increase, five cities are relatively unchanged, and six have seen a decrease — five of which saw drops between 32 and 78 per cent.

The stagnation and decreases demonstrate that uncertainty remains a significant factor for the construction market.

More cranes will be erected as previously delayed projects ramp back up, RLB says, but it could take a while to reach pre-COVID levels.