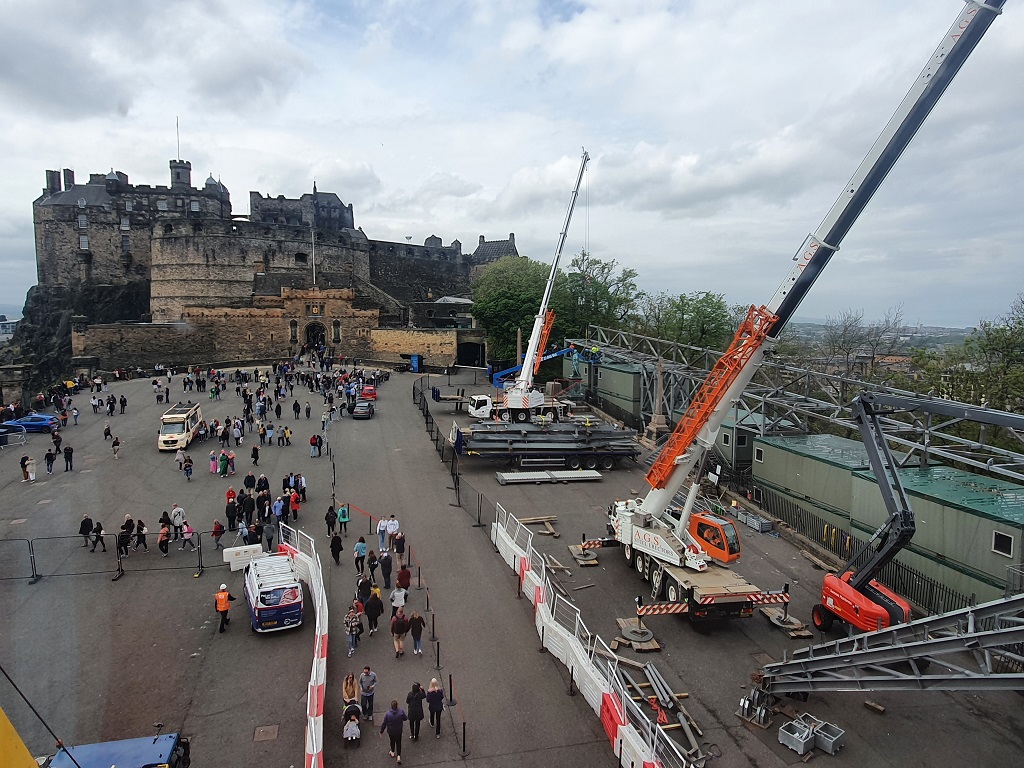 Ask AGS Steel Erectors Ltd. Director Allan Cunningham, and he will tell you it is an honour.

After a two-year pause due to the pandemic, his team got the opportunity once again to set up the spectator stands for the Royal Edinburgh Military Tattoo, which they have been doing since 2011. And to do so, the company will be using the Tadano ATF 60G-3 it acquired last year, as well as an ATF 70G-4.

The project should really not be underestimated: The Scottish steel construction company has exactly 40 days to set up the large spectator stands for the Royal Edinburgh Military Tattoo, which will be taking place for the first time in two years from August 5-27, all against the imposing backdrop of Edinburgh Castle.

As expected, the event will once again draw around 220,000 spectators who will get the chance to marvel at performances by numerous military bands and performance teams from all over the world.

The two stands to the right and left of the esplanade in front of the castle are sized accordingly. With a maximum height of 22 meters and a length of 90 meters each, they can accommodate 8,825 spectators.

“We’ll be erecting 650 tonnes of steelwork,” says Allan Cunningham from AGS Steel Erectors. For this purpose, his company is using Tadano all terrain cranes exclusively, namely its ATF 70G-4 and its new ATF 60G-3, which have been hard at work at the site since the beginning of May and have even drawn numerous spectators before the festival.

The AGS team will drive its last bolt by mid-June and hand over the stands to the event organizer ready for use.

“After that, we’ll be able to enjoy this one-of-a-kind festival ourselves all the way through to August 27 before returning to dismantle the stands with our Tadanos,” says Cunningham.

That will go faster for his team: The area in front of Edinburgh Castle is scheduled to be an open space once again after 37 days – until the next Royal Edinburgh Military Tattoo next year, that is.