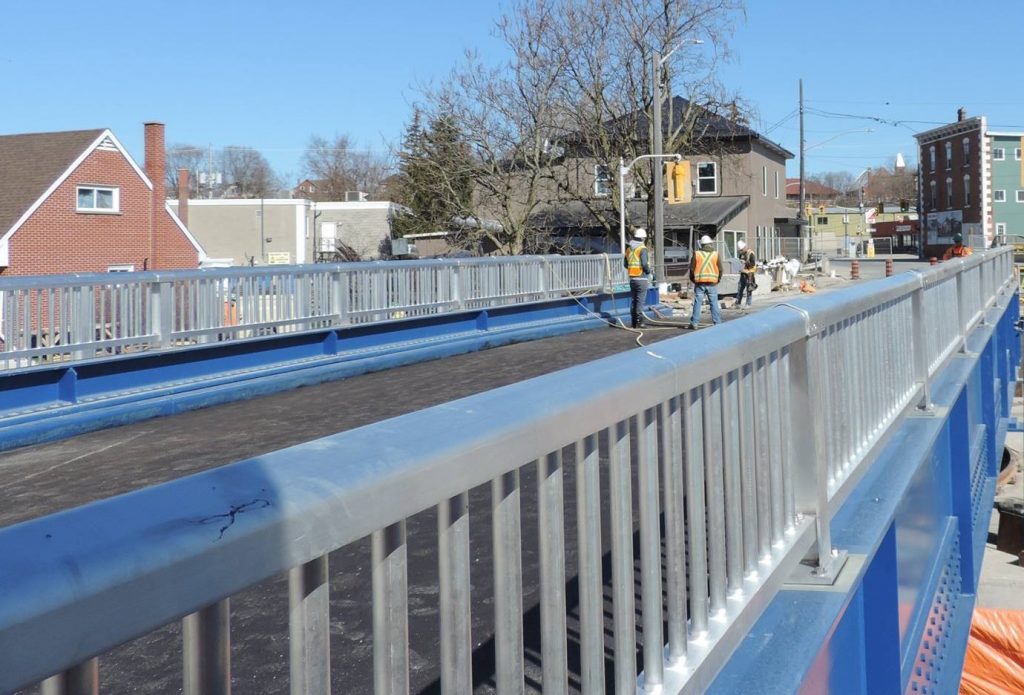 The construction and installation of a bridge at Lock 18, part of the Trent-Severn Waterway system in Ontario, is now complete but there’s more work ahead, according to a spokesman with Parks Canada.

“The replacement of the swing bridge in the Village of Hastings is part of an unprecedented $3 billion investment by the federal government to support infrastructure work to heritage, visitor, waterway, and highway assets located within national historic sites, national parks, and national marine conservation areas across Canada,” Darryl Whitehead said.

“As part of this historic five-year investment, numerous bridges, dams, locks, buildings, and historic structures along the Trent-Severn Waterway and Rideau Canal will be repaired or replaced.”

The crossing in the Municipality of Trent Hills was completed ahead of schedule. On site was a 250-ton Grove crane brought in from the Oshawa location of All Canada Crane to place the beams, girders and decking, Whitehead said.

“While the lifts conducted during construction were completed without issue, the operator did have to operate within a somewhat challenging environment,” Whitehead said.” The lifting area was limited to a narrow strip with buildings housing local businesses on either side, as well as overhead power and telephone wires.”

The relatively mild winter helped keep the work on track. Local residents were inconvenienced by a lengthy detour during the installation, which took just over a month.

“To help minimize these disruptions, the length of the closure was reduced by constructing the bridge off-site during the fall and winter months of 2015, rather than at the site itself. Parks Canada was also able to install a temporary pedestrian bridge which allowed accessible crossing at the site.”

The contractor for the project was Louis W. Bray Construction Limited of St. Andrews West, a rural community north of Cornwall. The design work was by Associated Engineering, an Edmonton-based company with offices across Canada.

Managing the project was Public Services and Procurement Canada.

Components of the bridge were assembled in Montreal over a five-month period. It was opened to traffic nearly a month earlier than scheduled, on April 29.

The Trent-Severn Waterway meanders for 386-kilometres across south-central Ontario between Lake Ontario at Trenton and Georgian Bay at Port Severn. It was originally surveyed as a military route but was built as a commercial venture, the first lock being completed in 1933.

Today the waterway is operated by Parks Canada as a national historic site and is used for tourism and by recreational boaters. There are 45 locks, 39 swing bridges and 160 dams and water control structures along its length. Lake Simcoe, one of Ontario’s largest lakes, is part of the route.

According to Parks Canada, it’s been described as “one of the finest systems of navigation in the world.”