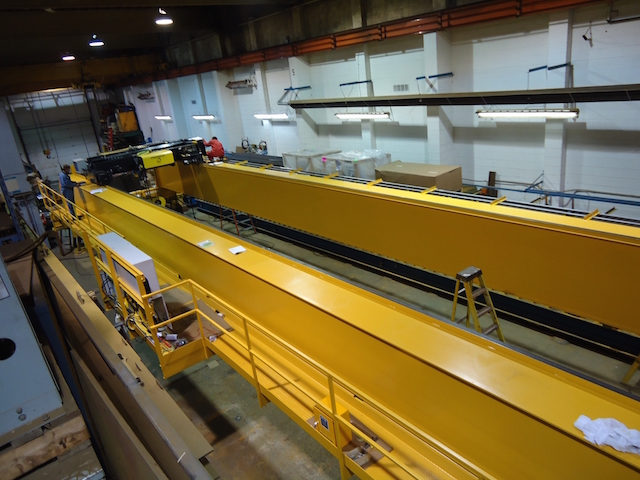 What do marble-slab countertops in B.C., oil in Alberta, cars and trucks in Ontario, and shipbuilding in the Maritimes have in common?

They all strongly influenced markets for overhead cranes last year and stand to do the same in 2017. Business across Canada was mixed last year and maintaining a diverse business strategy helped save the day, industry reps say.

“Markets are quite quiet right now,” says Neil Humphry, who oversees sales at North Vancouver-based Canco Cranes & Equipment Ltd., which designs, manufactures, installs and service a wide variety of kinds of overhead cranes for a customer base spread across Canada and as far afield as Siberia, Indonesia, and Bermuda.

“Our manufacturing is down quite a bit, but our service is up,” Humphry says. “We make more money doing service and repairs than we do building cranes, so from that aspect it’s not all doom and gloom. It’s more consistent with these cycles where things go into the toilet for a year or two and then the economy starts to improve, capital projects start up again and all of a sudden we’re behind the eight ball.”

Canco kept busy through the 2008-09 recession but has felt the sting from slumping oil prices and reduced resource extraction. “Commodity prices are depressed, and that puts the mining people into belt-tightening mode,” Humphry says. “If equipment isn’t broken and doesn’t need to be replaced they’re going to repair it and keep it running until the economy improves.”

“Most of our work is local to the B.C. area, though we do some work in Alberta and the States, and we’ve had contracts in Mexico and overseas through consulting engineers who invite us to bid on projects.”

Ellis describes 2016 as “pretty bleak” until about May. “Things were pretty quiet, probably due to the whole economic downturn and the oil sands and everything like that. But our service department has been busy lately. Things have picked up quite a bit.”

What slowed activity in B.C. for Norelco, Ellis says, were potential customers holding off on planned construction projects. “We’d get purchase orders and then a few days later they’d ask us to hold off for a couple months until they saw what was happening.”

Still, with a hot residential market in the lower mainland, demand for marble and granite kitchen countertops and bathrooms kept product fabricators and distributors busy. “Marble and granite have been all the range in new condos,” Ellis says, citing demand for overhead cranes to handle five-ton slabs.

While Ellis anticipates a continued slow recovery, he has noticed overhead competitors from Alberta prospecting in his area. “We’ve had a niche market here with three or four local crane builders, but now that the oil sands have slowed down the crane builders from Edmonton have come here sniffing for work. We’ve found a lot of low-ball pricing — you lose out on a job and find that they basically came in and bought the job.”

Indeed, Alberta was particularly hard-hit in 2016. Darren Lunt, president of Edmonton-based Weldco Companies, says low oil prices continue to pressure the economy. “There’s not a lot of activity in the resource sector in this province so we’re feeling it,” Lunt says.

Weldco doesn’t build overhead cranes but does use them in its operations, which are based in Alberta, B.C. and Ontario, and include steel fabrication, the manufacture of heavy equipment attachments and truck-mounted cranes, and repair and refurbishment work.

“We’re fortunate we have a spread across Canada,” Lunt says. “Forestry is still fairly strong for us in B.C., but when we get into mining and conventional oil and gas exploration it’s a tough market.”

Lunt says Alberta felt the effects of the recession in 2008-09 but things rebounded before oil prices plummeted a few years ago. “We’ve been struggling ever since,” he says. “We’re starting to see a number of players drop out. It’s starting to have that erosion effect on the market.”

Lunt says he expects the slowdown to continue through 2017 barring a significant event. “If a pipeline were to go ahead, that would be a major game-changer for us because a lot of our customers would go to work immediately to support that type of industry, and we would then of course support them.”

(Just before this went to press, the federal government announced approvals of Kinder Morgan’s controversial Trans-Mountain pipeline expansion project as well as the Enbridge Line 3 project. However, in the same announcement the feds killed the proposed Enbridge Northern Gateway pipeline.)

Ontario, meanwhile, has remained fairly strong, largely due to robust automotive and manufacturing sectors. That’s good news for Givens Engineering Inc., which supplies overhead cranes and manipulators geared towards relatively lightweight lifting and is located in London, within easy striking distance of auto plants in Windsor, Oshawa, St. Catharines and Cambridge, as well as parts manufacturers.

Owner and president Ray Givens estimates the auto sector, including buses, trucks, and SUVs, accounts for 85 percent of his company’s business.

“Automotive has really got itself together,” Givens says. “People are buying vehicles faster than ever, and if it continues we’ll keep on expanding.”

The overhead cranes and manipulators Givens manufactures are largely geared to hoisting materials in the featherweight class — 200 pounds and under. “Any kind of an automobile part,” Givens explains. “Car seats and batteries are favourites, and sheet metal parts are the number-one thing we move.”

Givens says activity slowed considerably during the recession of 2008-09, with some auto parts suppliers turning to wind power and other industries for relief. But things have rebounded, and Givens predicts the trend continuing upwards.

“This year (2016) has been our record year, 2015 was the record before that, and I’m pretty confident 2017 will be another record. Surely at some point it will have to slow down, but as long as people are buying we’ll keep on expanding.”

While surrounded by a fairly strong automotive sector, Motivation maintains a diverse customer base, tapping into automotive, manufacturing, mining, rail and port facilities.

The strongest performing sector? “Manufacturing,” Brimmer says, adding that Motivation has managed well enough in mining circles thanks to an active dealer network in northern Ontario. “Over the last couple years mining has had a bit of a downturn, but it’s rebounding.”

While Motivation’s customer base is largely Canadian, the company also supplies U.S. and overseas markets. “The U.S. hasn’t had the same growth we’ve had in Canada but it’s been steady,” Brimmer says.

In Stoney Creek, Ont., Munck Cranes Inc. has maintained a diverse vertical and geographic market for its half-ton to 250-ton capacity overhead cranes.

“The Prairies west to Alberta was weak this last year but B.C. has actually been pretty good, mostly with hydro projects, though Ontario and Quebec have been our strong provinces this year,” says North America sales manager Stephen Marczi. “We’ve seen quite a surge in business in the Windsor area this past year, with the automotive industry showing no signs of slowing down.”

Marczi adds that the Hamilton area, his company’s home base, is experiencing lots of tertiary business through industrial manufacturing.

Quebec, meanwhile, continues to present a viable market partly due to strong exports to the U.S. and considerable infrastructure investment. “We have a good foothold in Quebec and we’re looking for growth there,” Marczi says.

Still, recent election results south of the border leave room for caution. “We hope that the Trump government dust is going to settle, and if it does settle I think we’re going to see a faster kickstart to the U.S. economy. But right now everything seems to be on hold with very little movement. Everybody’s waiting for something to happen.”

Munck maintains operations in Buffalo, N.Y. and in Mexico, so Marczi isn’t overly worried about trade agreements. “I don’t think the new U.S. government under the Trump regime is going to play hardball with Canada,” he says. “I think it’s mostly southwards related.”

CEO Mike Mikoda says fisheries have been strong across the board, as have steel fabricators, machine shops, warehousing and transportation-related repair shops, and a lot of this activity has helped keep concrete facilities busy.

Regionally, Mikoda says, shipbuilding has remained active in Nova Scotia. Newfoundland’s offshore oil activities have been busy enough, though weakened iron ore prices have led to a slight slowdown in Labrador. While pulp and paper has been lukewarm in New Brunswick, Atlantic Crane has had some activity upgrading and changing out customer equipment. Mining has picked up somewhat in Nova Scotia, but not so much in New Brunswick, Mikoda says.

“The past couple of years have been average but, generally, our outlook here looks fairly bright,” Mikoda says, expressing optimism. “We’re noticing a bit of an increase in the housing business as far as sales go, and that’s always a good sign.”