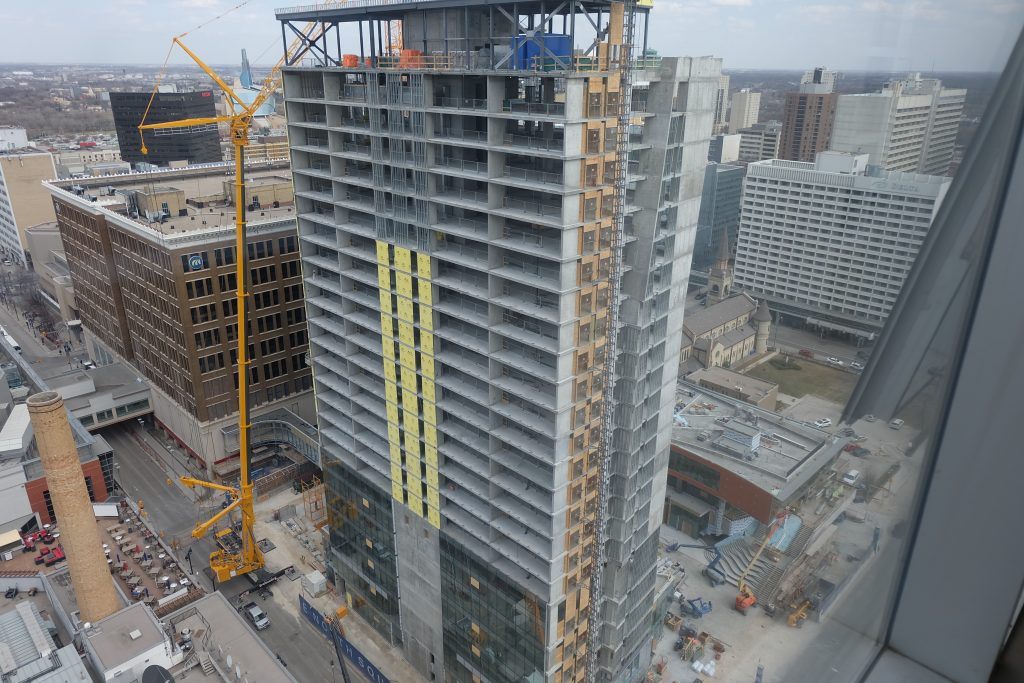 The enormous Liebherr LTM 1500 8.1 used by Sterling Crane to dismantle the tower cranes at True North Square in Winnipeg may have been the tallest crane ever seen in the city.

In May, the skyline of downtown Winnipeg was changed significantly with the removal of the last tower crane on site at True North Square. Phase 1 of the project, involving Tower 1 at 242 Hargrave and Tower 2 at 225 Carlton, began in January 2016. The substantial construction effort required significant crane work, with construction handled by PCL Constructors Canada Inc. and the dismantling subcontracted to Sterling Crane.

“Tower 1 topped off its structural building form in December 2017, reaching its final height of 17 storeys, and subsequently its tower crane was removed in January 2018,” says True North Real Estate Development president Jim Ludlow. “Tower 2 topped off in March 2018 at 25 storeys and its tower crane was removed in May 2018. These milestones have had a visible impact on the skyline of downtown Winnipeg, so they have been very exciting and rewarding to observe as we progress towards a new cityscape.”

PCL project manager David Enns says his company was responsible for the cast-in-place concrete structure on both towers. This involved supplying the concrete, the placing of concrete and rebar, form work, concrete pumping, and the installation of precast stairs and landings, and other material handling. For much of the heavy lifting, PCL utilized two cranes – a Liebherr 316 ECB12 and a Liebherr 316 ECH12.

“They were the best choices mostly because of the overlapping coverage,” Enns explains. “When we sized them, we made sure that it could accommodate the form work systems that we wanted to use. It was based on them working in conjunction with each other with the overlap in height and the jacking sequences, including how they would tie into the structure in order to be efficient.”

The way the cranes were staged required them to be tied into the structure, once the structure progressed past a certain height. When PCL began work on Tower 1, the timing of the construction of Tower 2 was not yet known for certain. In order to ensure that there was sufficient coverage for the full site, both tower cranes were tied to Tower 1.

“Both were top climbing tower cranes,” Enns says. “The biggest reason for that is because of the limited real estate that we had. We couldn’t afford to bring in big mobile cranes every time we needed to jack the cranes up as the structures progressed. They were able to climb themselves up, and then when we were done, they had the ability to climb themselves down prior to full dismantle.”

Preparation for the selection of tower cranes involved a detailed review to ensure the cranes had the right capacities to accommodate the required lifts and the size of the flyer cables, core forms and gang forms. They also had to reinforce the foundation walls around the tower cranes to prepare for the mobile crane load imposed on the structure during the dismantling of the tower cranes.

“It’s pretty common to see tower cranes with a couple of precast piles under the foundation, but for our tower cranes, our foundations were cast-in-place concrete raft slabs, with four caissons a piece to support them because they were freestanding fairly high right off the bat,” says Enns.

The key challenge for this job was limited space – city roads and the St. Mary’s Church bound PCL on three sides. With limited room to maneuver or stage materials, there was a constant focus on scheduling and sequencing to make sure that they had material delivered as needed.

“Otherwise, not only would the site get overrun, but the tower cranes would be so booked up that we couldn’t keep them focused on the high-priority activities,” Enns says. “They’d just be stuck moving non-critical material around all day and night.”

On both towers, Sterling Crane was subcontracted to dismantle PCL’s tower cranes following the construction.

Scott Baraschuk, branch manager for Sterling Crane in Winnipeg says that the dismantling was a very straight forward operation, however it did require the use of a very large mobile crane.

“Whatever they need, we’ll handle for them,” Baraschuk says. “In this scenario, it was the dismantling – to provide a mobile crane to dismantle their tower crane; just to provide a means of hoisting everything down. This particular one was the Liebherr LTM 1500 8.1. When we erected these towers a few years ago, the intent was to down climb the tower back to roughly 150 feet for dismantling. We now have the LTM 1500 available so I suggested we look at taking the tower at full height. This reduced the dismantle time by several days and eliminated the need to climb the tower crane down.”

The Liebherr LTM 1500 8.1 was utilized for the dismantling operations on both towers, however, it was used in two different configurations for each tower. During the dismantling for Tower 2, the crane was configured in a way that made it one of the tallest cranes ever seen in the Winnipeg skyline. Media coverage of the project claimed it was the single tallest crane ever used in the city, but Baraschuk can’t confirm that.

“I can’t say for certain, but it is certainly a contender,” he says. “It had roughly 380 feet of tip height in this configuration.”

It was an easy choice to use the Liebherr LTM 1500 for Tower 1, since it was locally available and easily capable of performing the job. Tower 2 had the same demands, but the flexibility of the 276-ft. telescopic boom was an added benefit given the site restrictions and their setup.

“We were able to maintain our setup into one city block, avoiding the closure of an intersection to build a long luffing jib. This resulted in significant time and cost savings to the customer.” Baraschuk says. “The biggest challenge is site congestion with a crane this large. When working in a downtown setting, you have got a lot of obstacles – you have public safety to be concerned about and numerous underground utilities as well.”

“We pride ourselves on having a fleet with industry leading technology and we have purchased a number of these units to capture new markets and niche jobs where you need a certain type and size of crane to perform,” adds Jeff Chernish, director of business development for Sterling Crane. “We provide efficient customer solutions similar in nature throughout Canada and we appreciate the visibility that this has brought us in Winnipeg.”

Tower 1 at 242 Hargrave Street is quickly approaching substantial completion, scheduled for the end of June 2018. It is comprised of retail and office space, and construction crews are currently focused on lobby finishes, amenity floor finishes, and mechanical, electrical, and elevator commissioning.

Tower 2 at 225 Carlton Street is scheduled to be completed a year from now. It contains some retail and office space but is predominantly comprised of residential rental suites. Construction teams are currently installing a high-performance glass curtain wall, after which internal finishes in the lobby and suites will become the focus, with an aim to welcome residents next spring.

Phase 2 of the project is a hotel and condominium complex being developed by Sutton Place Hotel & Residences. They aim to break ground this summer and be complete in 2020 or 2021.

The enormous Liebherr LTM 1500 8.1 used by Sterling Crane to dismantle the tower cranes at True North Square in Winnipeg may have been the tallest crane ever seen in the city.