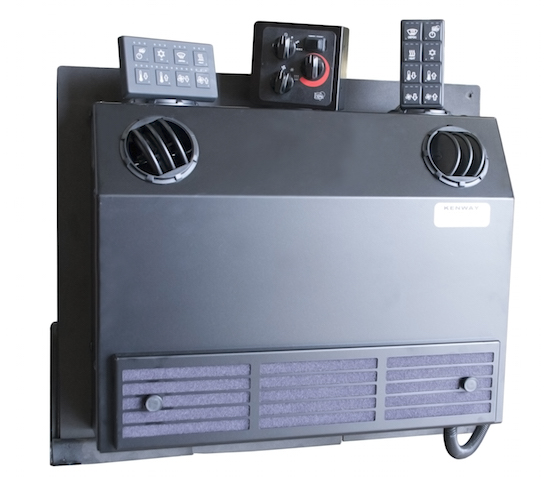 A flameless HVAC unit from Kenwood Engineering is ideally suited for cranes operating in Canadian winters, according to a news release from the Minnesota-based company.

construction equipment is ideal for “job sites that restrict or prohibit heaters running on propane or diesel fuel,” the release says.

The 9067 Series doesn’t depend on engine heat to run an antifreeze/coolant-based HVAC system, the company says. As a result, the unit works just as well with cooler-running EPA Tier 4 engines as it does with pre-compliancy engines.

“One customer told me his Tier 4 engines were only putting out about 100 degrees (Fahrenheit) at the engine, and only 66 degrees at the heater fitting,” Kenwood co-owner Kenneth Detloff says in the news release. “You’ll never heat a crane cab in northern Canada with those coolant temperatures. On the other hand, our hydraulic units can output 27,000 BTU per hour at idle. The hydraulic oil in our heat circuit can go as high as 205 degrees. Canadian crane operators in the dead of winter actually turn our heater down.”

It can be installed as a split unit system or as a self-contained model about the size of a small window air-conditioner. Installing the self-contained unit requires a rectangular opening in the cab wall, four hose connections, and a single electrical hookup.

“Our system does not require tanks of propane or diesel fuel and there is no hydraulic oil reservoir or filter in our system to maintain, which eliminates those regularly scheduled service steps,” Detloff adds.

Rey Carlson, Kenway’s chief engineer, says carefully designed hydraulic circuits protect the pump, valves, and seals from damage caused by oil breakdown and pressure and flow fluctuations. “The hydraulic power we use is only used to heat the cab, so our system has no thermal impact on the crane’s oil reservoir,” Carlson says.

A sixth generation design, Kenway 9067 Series “is the product of four years in-the-field use, both as OEM and retrofit equipment,” the release says.