"Canadarm 3, you could call it a crane, but it is indeed much, much more," director of general space exploration.

Ever wonder if cranes are used in space exploration? Crane and Hoist Canada editor talked with Gilles Leclerc about the similarities and differences between Canadarm3—a crane designed for assembling space structures in space—and a modern terrestrial crane, what’s new and interesting on Canadarm3, and what its overall function on the Gateway space structure will be. Leclerc is director of general space exploration at the Canadian Space Agency.

Jay: What’s your role at the Canadian Space Agency?
Gilles: I’m the director of general space exploration. Responsible for human space flight and robotic exploration which covers planetary missions and other projects. 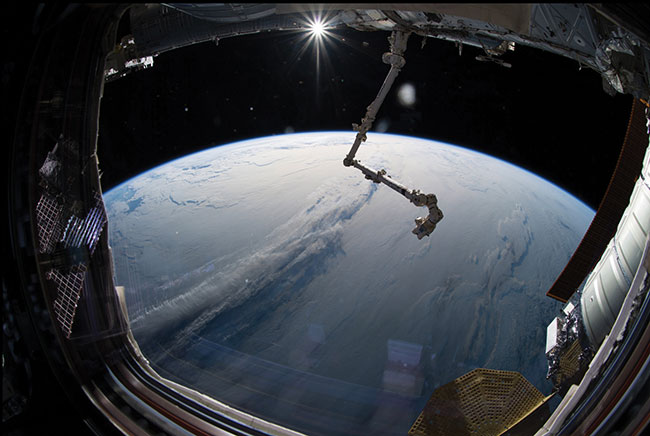 Jay: What were the original Canadarm and Canadarm2 used for?
Gilles: Canadian astronaut Chris Hadfield famously said, “Canada built the Canadarm2 that built the International Space Station” and that’s very true. We provided a service to assemble structures in orbit. The first arm is retired and has been for almost 10 years.

You can find the original Canadarm at the Canada Aviation and Space Museum in Ottawa. Canadarm1 is a series of robotic arms that were used on NASA space shuttle orbiters to deploy, manoeuvre, and capture payloads. The original arm was launched and brought back by a shuttle. In Canadarm2’s case, we launched it into space in 2001 and its been there ever since with no plan to recover it. Once the lifetime of the ISS is deemed over, the station itself will be dismantled, but there’s no plan to recover or retrieve the Canadarm2.

So, you can imagine it’s an extraordinary piece of engineering and has been in space for almost 20 years, we’ve changed some parts of the Canadarm2 but it’s still in perfect working order.

Jay: What is the main function of Canadarm3?
Gilles: Canadarm is a space robotics system. Canadarm3, the third “arm” is going to be sent to a lunar orbiting station called the Gateway. The purpose of all these space robotics devices is to assemble space structures. Also, to support activities by astronauts, and attach more parts as they may be sent into space. On the Gateway, Canadarm3 will be deploying scientific experiments, capturing visiting vehicles and maintaining the structure itself, which is an assembly of modules, that forms the Gateway. The Gateway is more modest than the ISS, but Canadarm3 will be as busy as Canadarm 2 is right now on the ISS. So, if go by the ISS, Canadarm 2 contributed to assembling the ISS. Now most of the work we do is simply maintaining it. For example, during the past month there has been several robotic operations involved in changing the batteries on the ISS. We’re still extremely busy maintaining the ISS and will likely be just as busy on the Gateway structure. 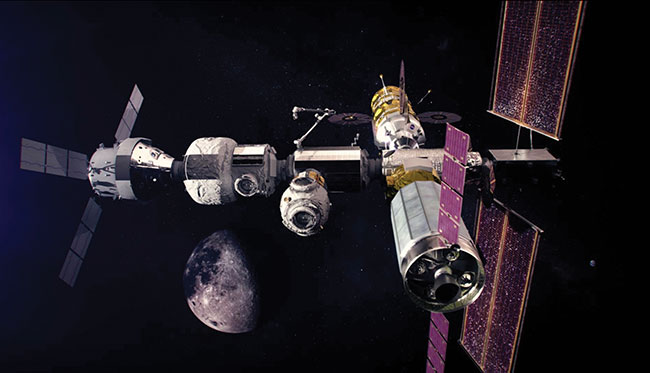 Jay: Can we call it a crane?
Gilles: The original Canadarm and Canadarm 2 are smart cranes. Canadarm 3— you could call it a crane—but it is indeed much, much more. It is very smart, very artificially intelligent, and has the same function as the human arm. It would be a disservice to the engineers and researchers behind the development of Canadarm3 to simply call it a crane, and I would be careful to call it equal to a terrestrial crane in terms of design. There are similarities but it is also very different. It’s going to be able to work autonomously, as well as being remotely controlled from the ground station, as well as by as astronauts on board the Gateway itself. But when you look at the architecture of the arm, it’s the same form and function as a human arm. It has three joints in the shoulder, one joint in the elbow, three joints in the wrist, seven degrees of freedom—you don’t find that in many terrestrial cranes. Each joint can move 360 degrees. It’s a very sophisticated crane.

Jay: Who is going to manufacture the arm?
Gilles: The Canadian Space Agency announced MacDonald, Dettwiler and Associates (MDA), based in Brampton, Ont., has our intention to give them the contract. MDA is the same company that designed and built the original Canadarm as well as Canadarm2. MDA is a Canadian owned company and is going to work with a large array of suppliers to complete the arm. The role of the Canadian Space Agency is to essentially manage the project. We give the contract, MDA will have the responsibility to manufacturer it and include all our new technologies. The Canadian Space Agency is responsible to deliver the Canadarm3 to NASA for the Gateway

Jay: What’s unique about the third arm?
Gilles: Artificial intelligence, the ability to be autonomous, a 3D vision sensor that will map objects around it, a sense of touch— which was already on Canadarm 2—automatic collision avoidance, and it will have a high definition 4k camera, that’s important. The colour camera will give us an interesting vantage point from the Gateway to earth, and will help immensely with operation on the arm but also just will be great to be able to look at the universe around the gateway. Just as the second arm was to the first, the third arm will again be almost a quantum leap forward in terms of development compared its predecessors. The company will have to integrate all these new features and they will also have to work with subcontractors to provide the hardware, but also with centres of expertise in A.I. in Canada and universities. We’re also going to be asking MDA to commercialize some of these technologies for space robotics. We want MDA to continue to take these technologies and put a spin on them for surgical robots, so they can be involved in medical surgery too. We want to see that kind of transfer; from the very exotic, specific space project, into terrestrial application and ground robotics.

Jay: What are some challenges involved in operating a crane, or arm, in space?
Gilles: The space environment is very harsh. You have radiation to consider. Thermal shock, going from exposure to the sun, to security and temperature. The extremes out there are, well—extreme. Also, the time that it takes for communications from command to get to the robotic system is also a challenge. But that is taken into consideration with the fact that the arm will be autonomous, so we will program it to perform a series of operations from earth so it can operate on its own. Going to the lunar orbit will cause additional challenges, with the main challenge being exposure to cosmic rays and radiations. The Gateway is going to be outside of the belt protecting the earth from solar flares and cosmic radiation. An additional challenge for space robotics is obviously the interaction with astronauts. We need both astronauts and robots to explore these very dangerous areas outside the reach of the earth. The ISS is at roughly 400 kilometres altitude, the Canadarm3 on the gateway will be at 400 thousand kilometres. That’s going to be interesting but not impossible. NASA and other nations have robots and rovers on Mars for example, which is much farther than the Gateway will be. We’ve learned to manage all of these challenges and technical issues but are also learning as we go. That’s the essence of the challenge of space exploration. 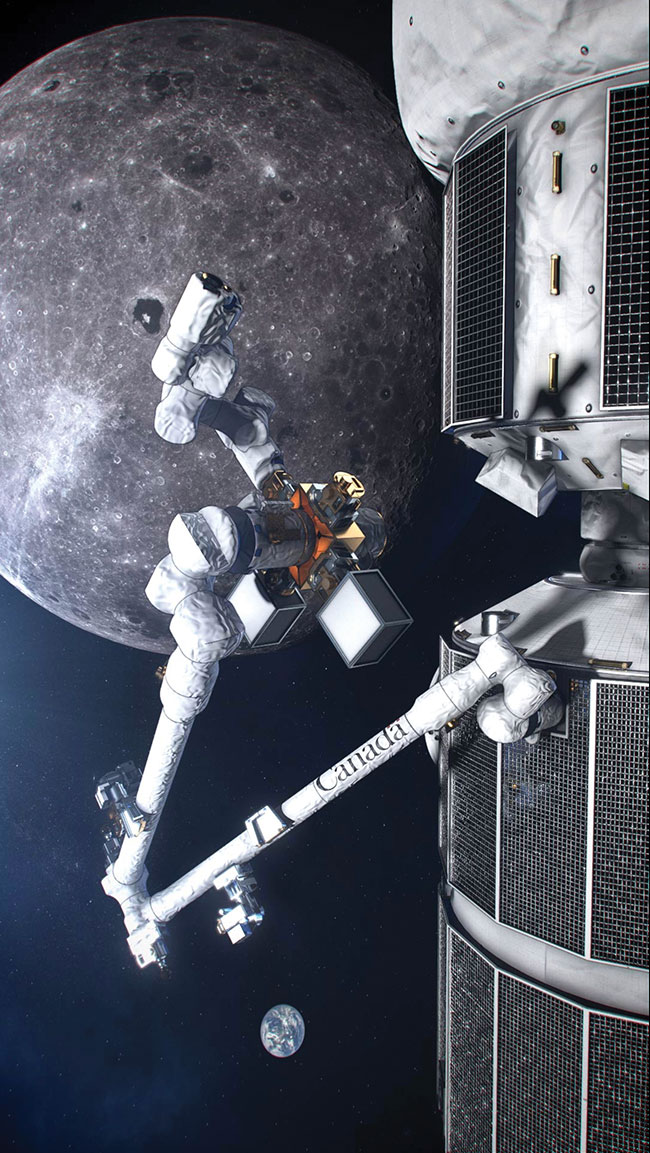 Jay: What’s something about the arm crane operators would find interesting?
Gilles: What’s interesting about Canadarm2 and 3 is that they don’t have a fixed base. They can move from one attachment, what we call robotic interfaces, to another— they don’t have a fixed base. The other thing is it’s a complete 3D environment, so they can move around 360 degrees. I’m not an expert in terrestrial cranes, but the mobility features of the arms are completely different in space compared to the environment on the earth. Another interesting aspect is there is no weight. Only mass. So, there’s no gravity pulling it down. We can only test the arm— crane—once we’re in orbit, because by itself the arm would not be able to support itself. In space we’re able to manipulate objects that are 10, 50, 100 tons, because there’s only mass, no gravity or weight.

Jay: Any last thoughts on the project?
Gilles: Canada’s progress in space, and Canadian space technology, is almost defined by the Canadarms. Canadian Space Robotics has been identified as an iconic contribution that we keep giving to the world of space exploration. We can be very proud of not only our current achievements but what the Canadian Space Agency will continue to achieve.