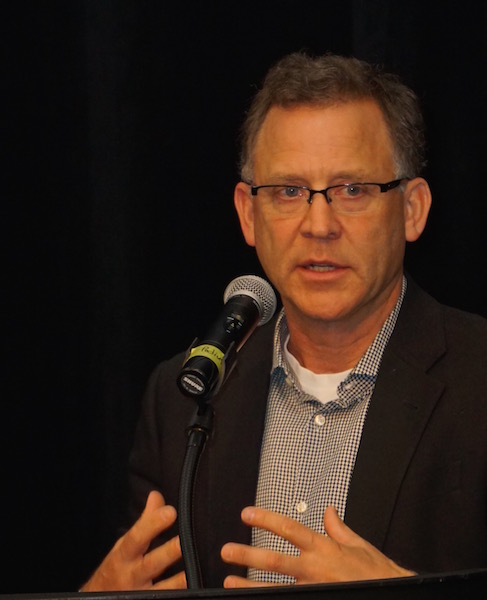 The wild fire that forced the evacuation of Fort McMurray, Alta., in early May was top of mind among attendees at the Crane Rental Association of Canada’s 18th annual conference in Calgary a month later.

Representatives of three crane rental companies with operations in Fort McMurray area presented a special tribute Friday, June 3, to the northern Alberta city and its 90,000 residents just as the first of them were returning to their homes after a month in exile.

Gijs (Gus) Verdeijen, vice-president of operations for the crane division of Mammoet Canada Western Ltd., recounted the flight from the fire of Curtis Burnett, the company’s regional director in Fort McMurray, on the very day Burnett and his family could go back home.

“It is impossible to describe the emotions, knowing that everything you have might be gone and many people have nowhere to go,” Verdeijen quoted Burnett’s written narrative of what he encountered during the mass evacuation of Fort McMurray, the commercial centre for the Alberta oilsands.

Also recounting the experiences of their companies and their workers were Bob O’Beirn, vice-president of oilsands for Sterling Crane, and Ted Redmond, president and CEO of NCSG Crane and Heavy Haul Services Ltd. All told, the three companies have about 350 employees in the Fort McMurray area — 46 for Sterling, 147 for Mammoet, and about 150 for NCSG.

Nobody was killed in the fire, although two teenagers – Emily Ryan, the 15 year old daughter of a deputy fire chief, and her cousin Aaron Hodgson, 19, — died in a collision between an SUV and a logging truck on highway 881 during the evacuation, according to news reports. However, O’Beirn noted that the tragedy wasn’t related to the evacuation itself.

The fire destroyed 2,400 homes. However, only one employee each from Sterling and NCSG and about five from Mammoet lost their homes with one other destroyed home being rented by an NCSG worker. Untold other Fort McMurray residents would be returning to homes that were damaged in the fire or have to “deal with all the science experiments on the countertops and refrigerators,” O’Beirn said during a question and answer session.

None of the equipment or other property of the three companies were damaged, although that was due as much to luck as anything.

“Actually our shop was directly across the highway from the biggest part of the fire that burnt some of the local camps down and we were very lucky that highway 63 acted as a fire break and none of our equipment or existing facilities was damaged,” said O’Beirn, who is a resident of Fort McMurray.

And Redmond recounted that at one point his company was moving workers back to a camp to help get it back up and running — only to have the fire strike again.

“I think the last people got out of there an hour before the camp burned to the ground,” Redmond said.

The tribute began with a four-minute video montage of fire scenes accompanied by “Alberta Strong,” a song by Alberta musician Neil Syzbunka that begins, “This fire’s in the sky/ there’s ashes on the ground/ the sun’s invisible/ it’s feeling like a war zone now …” And the presentation ended with Redmond reading a poem penned by NCSG crane operator Robert Carey from Huntsport, N.S. that itself ended with this message to the people of Fort McMurray: “Don’t let your spirits fall.

Our heartfelt love is reaching out to you all.”

Someone who had a very close look was Mammoet’s Curtis Burnett.

About 2 p.m. on May 3, after panicked discussion on local radio and social media, Mammoet made the call to evacuate its sites in the area, including its office in Fort Mackay about a 45-minute drive from Burnett’s home in Fort Mac. Burnett described the scene from the Supertest hill, a steep stretch along highway 63 north of the city, as looking like “driving into hell,” Verdeijen said.

When Burnett got home, his wife was ready with a go basket of essentials. So they loaded up their vehicles and tried to snake their way south of town. But they found that route blocked as “the entire treeline on the south side of the (Athabaska) river was a raging inferno.” So they turned around and headed back north, to the Mammoet office in Fort Mackay.

“Had I been alone, I might even have rode it out but I had my one year old son with my wife and my four year old daughter in the truck,” Verdeijen said, reading from Burnett’s account.

That return journey took seven and a half hours as vehicles fleeing the fire occupied all four lanes of the highway as well as the shoulders.

“As I arrived at the office, there were already about 53 people there with several families, dogs, cats, etc. that had sought refuge for the night,” Burnett recalled.

Finding accurate information was difficult — a point O’Beirn also raised — but some of Burnett’s colleagues did chance across media reports that gave them the confidence to attempt a run south about 12:40 a.m. It took nine and a half hours to reach Spruce Grove, a trip usually accomplished in less than half that time.

“At one point we did have to pull over to take a nap but we made it,” Burnett recalled.

Verdeijen said Mammoet was fortunate to have had a crisis management program in place that included annual practices in which a crisis team went through various scenarios. “That definitely helped in this situation,” Verdeijen said.

The team sprang into action at 8 a.m. on May 4 and for the first week met four times a day, then twice daily the next week, and once a day during the third week.

“And then now we’re doing once a week just to make sure we keep all ourselves updated,” he said.

NCSG enacted similar measures and decided almost immediately to move all its Fort Mac employees to Edmonton “on a no questions basis,” Redmond said.

Companies and workers pitch in

“We got hotels for them and put them up in Edmonton for a minimum of a week just so they could get their feet under them and get in touch with insurance companies and start to figure out how they were going to deal with (the crisis),” he said.

Many Sterling Crane employees pitched in to help those who initially fled north after the fire reached Fort McMurray. The company had operators in places like Fort Hills, about 45 kilometres from the city, who after work handed out water and food, gave directions, showed people where to park, and helped them with accommodation, O’Beirn said.

“There’s always a lot of talk about crane operators isn’t there?” O’Beirn said. “Well our guys really stood up and they gave wholeheartedly without even thinking about it, offered up their camps rooms for families and really, I think, showed the kind of people they are.”

O’Beirn also heaped praise on the oil companies in the region, which used their air strips to fly people to safety, opened their camps to evacuees at no cost, and dispensed free gasoline to those leaving by car and truck.

“It’s very fashionable to denigrate big oil companies in some parts of this country, but I’ll tell you something: I never saw anybody from Greenpeace filling up people’s trucks or giving out water or helping anybody on the side of the road,” O’Beirn said.

NCSG meanwhile received assistance from employees at its operations in the U.S.

“We have a big contingent down in Louisiana that have all gone through hurricane Katrina and they were all looking for ways to help,” Redmond said. “So we set up an emergency relief fund, which we raised about $48,000 to date, to help our Fort McMurray employees get back on the ground.”

Insurance companies also responded quickly, O’Beirn said, noting that they set up booths at evacuation centres across the province and in some cases handed out cheques on the spot “to allow people to have something to live on in the short term.”

While cautioning that he didn’t want to “armchair quarterback,” O’Beirn said in hindsight that the evacuation could have started sooner. He also called upon the provincial government to build another highway to link Fort McMurray with the rest of Alberta, such as a connection to Grande Prairie. And he suggested that Canada have emergency radio stations, as does the U.S., for broadcasting reliable and timely information during crises.

After Fort McMurray was evacuated, its radio stations, which were all clustered downtown, stopped broadcasting.

“So the information that we were getting was from Edmonton and very old,” O’Beirn said. “Most people were getting their information from Facebook and social media, not the best places to get information. And there was wild speculation and all kinds of crazy rumours going on, as there is in any kind of emergency event.”

All in all, though, he was proud that his community was able to evacuate safely from a chaotic scene in a fairly orderly way, without much direction other than from a few RCMP officers.

“It’s a real tribute to the people in Fort McMurray,” O’Beirn said.

The fire also had a huge impact on business, Redmond pointed out.

“We went from having 150 employees working to zero,” Redmond said.

The company’s heavy haul business up north also shut down because the highways closed.

He advised other CRAC members to take a lesson from that and think about how they would cope if a large chunk of their revenues disappeared suddenly.

“I think one of the key lessons there is we always keep a significant amount of cash in the bank as part of our cash management,” Redmond said. “We always make sure we have lots of room in our lines of credit.”

As for Fort McMurray itself, while the residents have just begun to return to their homes, it will be a long time before the recovery is complete.

“At the height of construction in Fort McMurray which is probably about three or four years ago, they were building around 700 homes a year,” O’Beirn said. “So you can imagine if there’s 2,400 homes destroyed how long that’s going to take to rebuild.”

After the tribute was over, Osterman closed by saying that the panelists were too modest about the roles they played in the evacuation.

“Bob, for example, was standing on the side of the ditch with a fire extinguisher fighting fires as transformers popped,” Osterman said. “So I know these guys all worked hard during that time. They deserve a lot of credit.”

Former CRAC chairman Dean Schmied, who is based in Grande Prairie, said that’s just what Albertans do.

“I think everybody pitched and did exactly what they had to do and it shows how Albertans come together when there’s a tragedy,” said Schmied, a former vice-president and advisor with NCSG who is a still a company shareholder.

As a commercial helicopter pilot, Schmied was told to be ready to pilot his Robinson 66 chopper to aid with the evacuation if necessary.

“I was told we were next in line,” Schmied said. “They never called but through the grapevine, we were next. I’m sure every commercial helicopter pilot and every company that had bigger helicopters with the capability of carrying a lot of people would have at any time jumped in.”