News
Building permits down from December 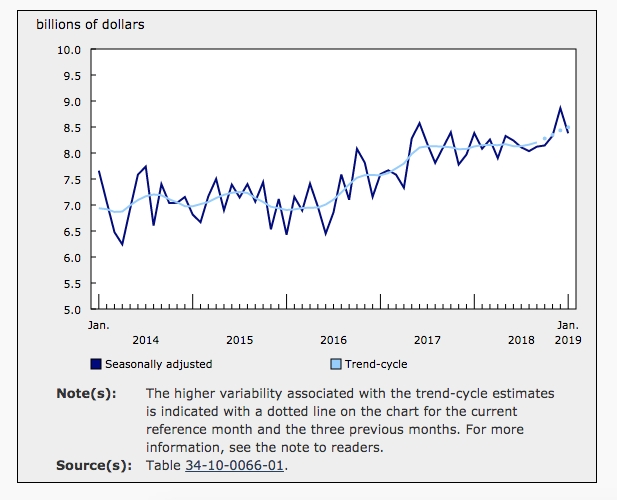 Canadian municipalities issued $8.4 billion worth of building permits in January, down 5.5% from the record high in December. Lower construction intentions for commercial buildings were responsible for the national decline.

Non-residential sector: Commercial component down after record high in December
In the non-residential sector, $3.0 billion worth of permits were issued in January, down 15.8% from the previous month. The decrease was the result of lower construction intentions for commercial buildings, down 25.3% to $1.8 billion, following a record high in December.

Meanwhile, increases were reported for both the industrial (+4.8%) and institutional (+0.4%) components. The gains were mainly attributable to higher construction intentions in Ontario and Quebec.

In the multi-family dwelling component, building permits issued by municipalities rose 0.7% to $3.3 billion in January, surpassing the record high set in December. This was the fifth consecutive monthly increase. The largest gain was in Ontario, while Quebec reported the largest decline.

Provinces and census metropolitan areas: British Columbia reports declines in all components
The total value of building permits fell in five provinces in January, with British Columbia reporting the largest decline. Meanwhile, construction intentions were down in 16 of the 36 census metropolitan areas (CMAs). Vancouver and Montréal recorded the most notable decreases.

The value of building permits in Quebec declined 10.3% to $1.6 billion. The decrease was mostly attributable to lower construction intentions for multi-family dwellings in the CMA of Montréal, where the value of permits was down 39.5% to $338 million.

Meanwhile, the value of Ontario permits grew 8.6% to $3.4 billion in January. All components, except commercial buildings, reported an increase. The value of building permits for multi-family dwellings in the CMA of Toronto rose 26.5% to $871 million, the second highest value on record.