The King, Ontario-based company’s fleet of excavators have chewed through bridges that cross Ontario’s 400-series highways, rail lines and most recently, the Gardiner Expressway eastbound ramp in Toronto.

“We’ve built a division of bridge work and we do a lot of bridges. Most of them are more about logistics and moving and assembling 50-to-80-ton excavators,” said Mike Glavin, general superintendent for Priestly Demolition (PDI). “It’s having a Saturday night at the bridge, and by Sunday morning, that bridge is gone.”

While excavators are usually the stars of the show, the company’s cranes also play a role in completing the job. Cranes are required assemble excavators on site, or to help remove oversized pieces of debris.

“The cranes definitely work in great unison with our business,” Glavin said.

Recently, Priestly was tasked with removing a pedestrian bridge that spanned the Keating Channel in east Toronto.

As part of Waterfront Toronto’s Port Lands Flood Protection Project, the bridge was removed to accommodate the construction of reinforced concrete walls and improved habitat features for fish and other wildlife.

A unique challenge For Priestly Demolition 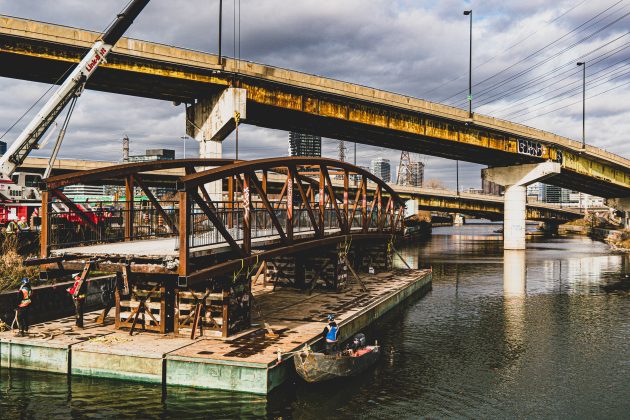 Removing the bridge presented a unique challenge, as the structure was only accessible from one side of the channel. To safely complete the demo, Priestly used a Link-Belt 8090 Rough Terrain Crane to assemble a nine-piece floating barge in the channel.

“We could only work from the west side, that’s why using a crane to facilitate the work made it more doable. It made it schedule friendly and made it safe for the work,” Glavin said.

“We had to offload the barges and stage them, then move the crane to pick them and put them in the water,” said Dallen Rands, branch manager at PDI National Cranes. “If we had to use a truck mount it would have made the process take twice as long. That RT is very handy.”

Once assembled and in the water, the barges were positioned underneath the bridge. Priestly then welded six heavy duty wood block and steel framed towers underneath the structure and lowered the bridge onto the barge. The crane was then used to remove remaining bridge pieces on the east side of the channel.

“We ended up throwing the jib on the crane and we could reach across to 155 feet, and still able to lift 2,000 pounds,” Rands said.

After the bridge was moved to the west shore of the channel, Priestly removed the jib from the crane and began moving segments of the structure to solid ground for processing, to protect the waterway from contamination.

“So, we were able to lift larger chunks of the bridge when it was close to us. We ended up accomplishing the job in about a week. It worked out pretty well.”

The pedestrian bridge was located close to where the Gardiner becomes the Don Valley Parkway. Working in a tight space between the overpass and the channel, safety and equipment maneuverability were key.

“The (rough terrain cranes) make it a breeze when you’re working in areas like that,” Rands said. “I could have put a truck mount in but doing so takes longer to set up. With the RT, you just set the boom. Lift the outriggers and you move it.”

“Those RTs are great because they’re so small and versatile and they can go on any project,” Rands said. 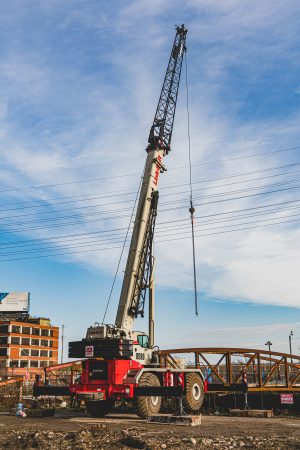 “The RT is good for uneven ground conditions. We had to put mats in when we were working about 12 feet away from the edge of the water,” Rands said. “And we did a 3D lift plan to make sure the weights were fine for the quadrant swinging over the front.”

The Link-Belt 8090 features a pin-and-latching telescopic system capable of lifting 90-tons at 8 feet. The standard boom ranges from 38 to 140 feet, while attachment options extend the reach by 58 feet.

Priestly purchased the Link-Belt 8090 about four years ago, and it is currently the only rough terrain crane in the company’s fleet. Rands expects to add more RTCs to the Priestly fleet soon.

“They are versatile, and they are good for long duration projects. And that’s what we’re chasing right now,” Rands said.