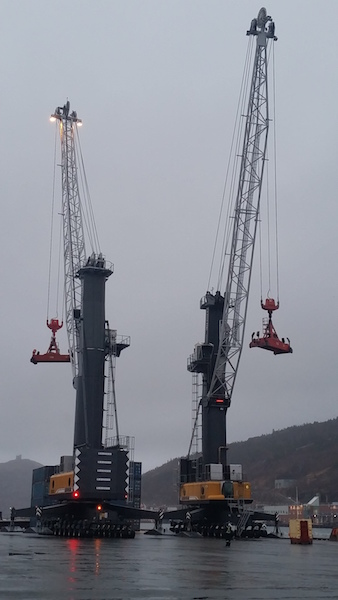 A new mobile harbour crane has gone into service at a terminal in St. John’s, Nfld., to replace one damaged in a fire two months earlier.

The Liebherr LHM 500 went into operation at midnight on Dec. 3, Glenn Etchegary, vice-

president of operations for the Oceanex Inc. terminal, said in an email to Crane & Hoist Canada.

CBC News had earlier reported on the new crane’s arrival.

“We’re happy to have the replacement crane back on the dock,” the Nov. 21 news item quoted Oceanex president Matthew Hynes.

The company had announced Oct. 29 that it had placed an order for a new Liebherr mobile harbour crane valued at almost $6 million. The new machine replaces the terminal’s nine-year-old crane 103, which caught fire while unloading a cargo ship, according to news reports of the incident.

“To ensure we are able to provide the consistent, reliable service our customers have come to expect, it is absolutely necessary to replace the crane as quickly as possible, particularly before the arrival of the harsher winter weather,” Oceanex executive chairman Capt. Sid Hynes said in a news release announcing the crane replacement initiative.

With only one crane left working at the terminal, the company “has incurred substantial expense” in recent weeks as it has tried to maintain its schedule by adding more workers and faster sailing speeds.

“At Oceanex, our focus is on delivering a safe, efficient service and having the second crane is a critical component,” Capt. Hynes said.

The new crane is similar to two others that Oceanex has bought previously from Liebherr, the release said.

According to the Liebherr’s harbour cranes website, the LHM 550 has a maximum lifting capacity of 144 tonnes and a maximum radius of 54 metres.

In standard configuration, the LHM 550 has a turnover of up to 32 cycles per hour, and up to 38 cycles per hour when equipped with Liebherr’s trademarked Pactronic system.

The new crane is 30 metres long and has an undercarriage resembling that of a Boeing 747 aircraft, Matthew Hynes told CBC.

The crane, which has an projected lifespan of 20 years, is expected to perform lifts of up to 100 tonnes and as many as 25 lifts per hour, the report said.