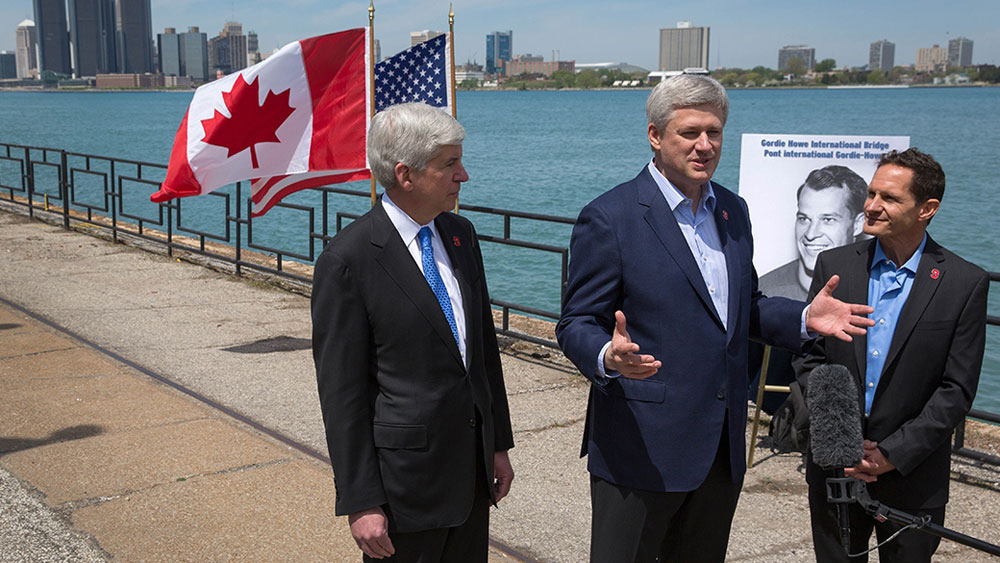 After a long battle

Building the proposed $2.2 billion Gordie Howe International Bridge — which will link Windsor, Ont., with Detroit, Mich. — is bound to require a lot of heavy lifting.

That should mean work for Canadian crane rental companies, although it’s hard to say what form that work will take, the owner of a Windsor-based crane rental firm said recently.

“Well, I’m sure there will be (opportunities),” said Randy Moir of Moir Crane Service Ltd. “We’re certainly not on the inside track in terms of becoming a general contractor or anything of that nature. Those huge multinational firms that are bidding it will probably trickle (work) down to us at some point.”

The proposed bridge, named for the Saskatchewan-born hockey legend who played most of his storied career in Detroit, has been the subject of a fierce battle for years. The primary nemesis is Detroit businessman Matty Moroun, current owner of the Ambassador Bridge, the existing 86-year-old truck crossing that the new Gordie Howe Bridge is designed to replace. Moroun, who has long proposed a new six-lane bridge of his own to replace the four-lane Ambassador Bridge, “has been fighting tooth and nail” in court to block the publicly funded Gordie Howe Bridge, the CBC noted in late September following a court judgment.

That premise “is completely erroneous,” Mickey Blashfield, director of governmental relations for the Ambassador Bridge, said in a brief phone interview, adding that “we’re continuing forward.” However, he declined to say anything else and instead asked for emailed questions to which he has yet to respond.

Regardless of what actions the Ambassador Bridge ownership takes, however, the Gordie Howe Bridge project “has got a tremendous amount of momentum at this point,” said Dr. Bill Anderson, the director of the Cross-Border Institute at the University of Windsor.

“It certainly isn’t the case that if the Ambassador Bridge goes ahead and starts building their new bridge that this project (the Gordie Howe Bridge) would be cancelled,” Dr. Anderson said. “That’s not in the cards.”

Building the new bridge is long overdue, he said. “This is the most important single trade link to Canada, which is a trading nation. And so making this investment is really important to our economic future.”

The new bridge is so important to Canada, in fact, that the Canadian government is financing the

entire project — including fronting US$550 million for all the work on the U.S. side, such as an interchange and highway upgrades. That’s because the Michigan legislature failed to approve financing the state’s share the project, leaving state Gov. Rick Snyder to forge a side deal with the Canadian government in June 2012. As Dr. Anderson explained, that agreement enabled a governance structure for the bridge project “even if it didn’t give him (Mr. Snyder) any legislative authority to spend any state money on it.”

The Windsor-Detroit Bridge Authority, the Canadian Crown corporation overseeing the Gordie Howe Bridge project, is “pleased that this portion of the outstanding issues are resolved,” said an email from Heather Grodin, the authority’s vice-president of communications and stakeholder relations.

The authority now anticipates the bridge will be in service in 2020, she said. It announced Oct. 14 that it had received responses from six North American and international teams to its July 20 request for qualifications to finance, design, build, operate, and maintain the crossing.

Randy Moir said opportunities for his company to work on the bridge itself might be limited. However, he noted that two massive customs plazas are planned for either side of the span.

“They will certainly involve some structural steel and things of that nature that we may find local companies are awarded contracts on, and we’ll participate in that way,” Moir said. “On the bridge itself proper, there’s really no way to know exactly what the engineering is and what the plans are but I would think that there will be barges and other types of crane operations that are unrelated to what we do here.”

A Windsor-area company that does have floating crane service didn’t respond to a request for comment.

A presentation from the bridge authority this August revealed the bridge could be of either a suspension or cable-stayed design. It would have a clear span of 850 metres with no piers in the water, and a total length of 2.5 kilometres. The project also features ports of entry of 60 hectares on the U.S. side and 53 hectares on the Canadian side.

The RFP, which is more detailed than the RFQ, will require respondents to address the technical and financial aspects of the project, “including a fixed price and schedule,” she said.

“Submissions will be rigorously evaluated according to pre-set criteria and a preferred proponent will be selected,” she added. The last step in the process will be the “financial close,” which sets the final price and schedule in a contract.

Separate to the P3 process, in August the Windsor-Detroit Bridge Authority announced that it had selected Amico Infrastructures Inc. of Oldcastle, Ont. to complete a $59 million “Early Works” project at the Canadian port of entry site. These early works involve construction of a perimeter access road, utility relocations, and fill placement. “Having these activities completed prior to the start of work under the P3 project will help achieve the broader timeline for project completion,” Grodin said.

Asked specifically what provisions there are for local subcontractors such as crane rental companies, in Canada and the U.S., to get a share of the work on the bridge project, Grodin said, “Through the P3 procurement process the engagement of local resources will be encouraged.”

She said the project will create jobs on both sides of the border during construction and permanent jobs in the operation of the crossing.

“As well, it is expected that thousands of jobs will be created in businesses that will supply goods and raw materials for the project,” Grodin said.

Moir expects the bridge will have a great economic impact on Windsor.

“I’m sure we won’t have the labour force to cover everything that’s going on,” Moir said. “So I’m sure there will be a lot of new people coming in and new restaurants and new stores and all that kind of stuff. That’s typically what we tend to see happen on a big project.”

Editor’s note: Some of the material in this article was published previously in Canadian Sailings magazine.