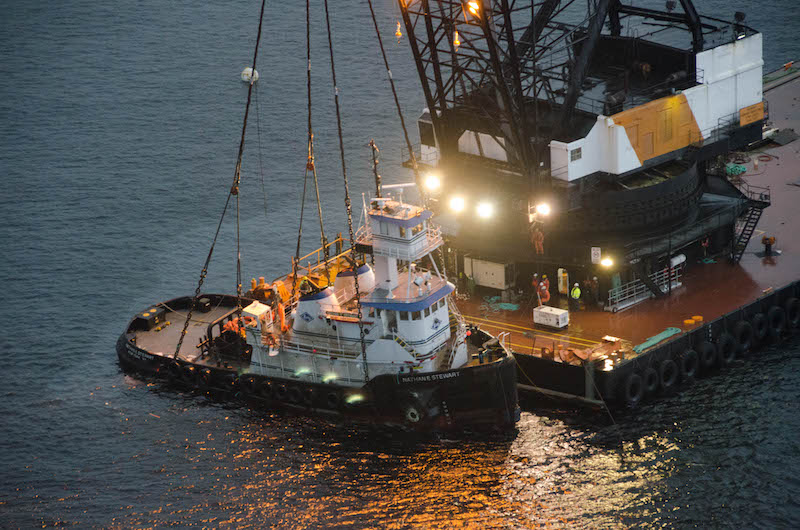 A 700-ton crane barge was brought in from Seattle in mid November to lift a sunken tug boat from waters near Bella Bella, B.C., over a month after the tug went aground on a reef.

The Nathan E. Stewart ran aground in Seaforth Channel Oct. 13 and spilled more than 100,000 litres of diesel fuel, oil and other lubricants, according to news reports. Thirty-four days later, the D.B. General crane barge plucked the stricken tug from deeper water where it had been dragged.

“We are relieved that the dirty tug is off the seafloor and on its way to being removed from Heiltsuk waters, but this is only the beginning for our community,” Marilyn Slett, chief councillor of the Heiltsuk Nation said in a news release. “After the outside world stops paying attention, the Heiltsuk people are left to clean up the mess.”

The chief said her people “have lost the most in this disaster” and that removal of the tug is just the beginning of their recovery efforts.

“We’re feeling very uncertain about our future as we face the hard work of assessing the short and long-term environmental, cultural and economic impacts on our community,” Slett said.

The Nathan E. Stewart, owned by Texas-based Kirby Corporation, was pushing an empty petroleum barge when it ran aground, according to news reports.

The D.B. General is owned by General Construction Company of Poulsbo, Wash., according to a data sheet on the Washington state government website. The barge’s Clyde 52 crane has a capacity of 700 tons at 70-foot radius over the stern and a 500-ton capacity at 70-foot radius when fully revolving, the fact sheet notes.

General Construction is part of the Kiewit family of companies.

Ayla Brown, communications coordinator for the Heiltsuk Tribal Council, said by email that the tug was to a dry dock in Burrard Inlet for a Transport Canada investigation.

But for the Heiltsuk people, the story doesn’t end there. The chief, who was critical of the slow response to the sinking and subsequent spill, said governments have to make sure that her people are given priority when it comes to compensation.

“Our community members are asking what we are going to do now that our harvest areas have been affected by widespread oil contamination,” the chief said. “These traditional family harvesting areas have been used by our people for thousands of years — now we are faced with having to travel further south into more exposed and dangerous waters to find our traditional food.”