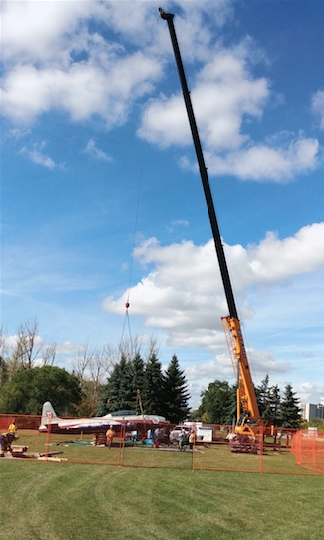 Since 1967, drivers on Winnipeg’s Portage Avenue have been accustomed to the sight of a Lockheed T-33 Silver Star jet, which was erected as a monument in Woodhaven Park. Over 50 years of exposure to the elements has taken its toll, however, and the plane was recently crane-lifted off its pedestal for repairs, restoration and refurbishment. The jet is now back in position sporting a shiny new red paint job reminiscent of the Red Knight military pilot group who flew from 1958 to 1969.

“This particular T-33AN Silver Star Mk. 3 entered service with the RCAF (Royal Canadian Air Force) in 1955, the first part of its service life in RCAF Stations Gimli and McDonald as a trainer, and later serving in Ontario and Nova Scotia,” says Jason Bell, parks capital projects manager for the City of Winnipeg Public Works department. “It was declared surplus in 1967 and as part of the Canadian Centennial, it was presented to the City of St. James [a district of Winnipeg] to commemorate the long connection between the RCAF, the aviation industry and the City of St. James.”

Western Industrial Services was awarded the contract for removing the jet and replacing it after refurbishment. Subcontractor Prairie Iron Erectors hired Calado Crane, which utilized a 90-ton hydraulic Link-Belt mobile crane to lift the approximately 7,000-lb. aircraft from the pedestal and covered it with tarped scaffolding in a fenced area of Woodhaven Park in September.

“That crane provided the reach and weight that we could lift it up without any issues,” says Calado Crane dispatcher Chris Downey. “Everything went pretty smoothly. They got it strapped up and off the pedestal very easily.”

Over the next couple of months, paint and corrosion were removed from the aircraft’s aluminum skin with a soda blasting process, the skin and steel mounting arms were repaired and the plane was re-painted and re-decaled to Red Knight specifications. The concrete pedestal and mounting plates were also repaired and repainted. As of press time, Calado Crane was scheduled to replace the crane on the pedestal in early December.

The total cost of all work associated with the project is estimated at $170,000, which is being funded by the City of Winnipeg Capital and Land Dedication Reserve funds, a private donation of paint, and a significant contribution from the Slaughter family – Brigadier-General Bill Slaughter flew 26 solo aerobatic performances as a Red Knight in 1963 and 1964. In spring of 2019, a public event will be held to officially unveil the restored jet.