Features
Wine raised by the container at Quebec intermodal terminal 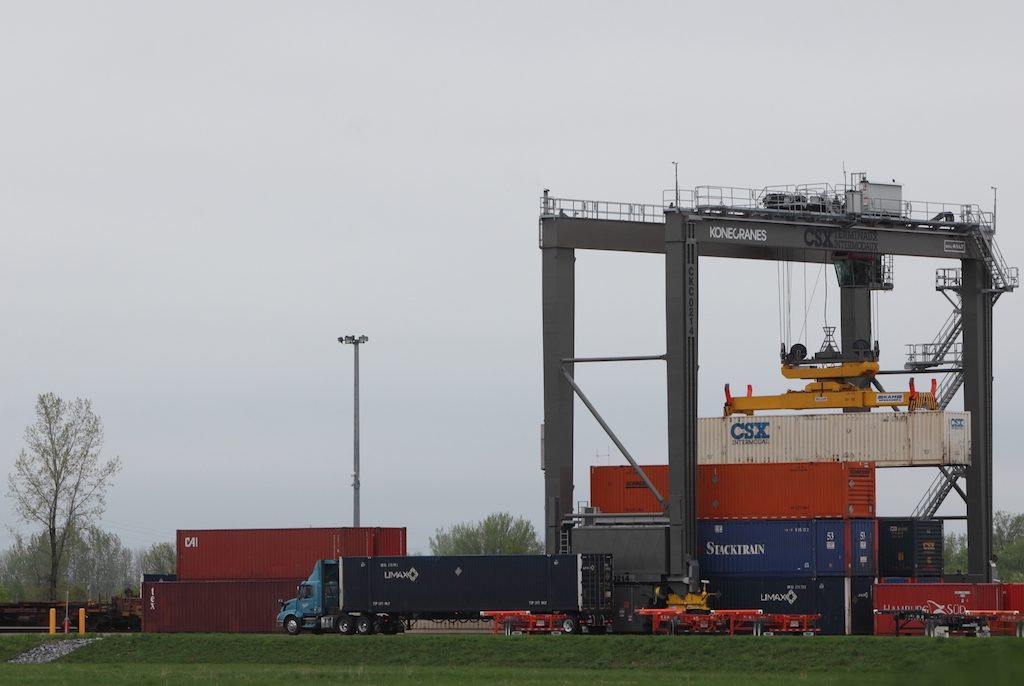 Many of us enjoy wine one sip at a time. But the cranes at CSX Transportation’s intermodal yard in Salaberry de Valleyfield, Que., hoist it by the shipping container.

With five tracks coming in and out, the terminal is the Jacksonville, Fla.-based railway’s lone intermodal yard in Canada.

“We have freight coming in and out of ports on the east coast and elsewhere in Canada, and we use the cranes to strip and load the rail cars,” says terminal manager Diane Yelle.

Two of the five tracks are support tracks and three are for processing. “That’s where care operators actually do most of their work,” Yelle says, describing a mix of marine and domestic containers.

Freight varies from imported home electronics and California wines to pulp and paper and raw materials bound for export.

“The destination depends on the commodity in the container,” Yelle says. “It could be going to a distribution centre, a warehouse or a factory.”

Opened in November 2014, the terminal can handle 100,000 containers annually, though CSX declined to discuss actual numbers due to business sensitivity.

The containers, usually steel but sometimes aluminum, weigh up to 31 tonnes and are similar to those used at ports around the world, Yelle says.

The procedure for transferring containers from one mode of transportation to another is also comparable whether the yard is seaside or landlocked. Trucks come in and out of the yard to drop off and pick up a load, and cranes transfer the containers between chassis and railcar, with some sorting and stacking in between.

The rubber-tired gantries, 86 feet wide and 73 feet high, hoist through an upside down “U” motion — up, over, down. They’re designed to reach one over four, which means they can hoist a container over-top four stacked ones.

Terminals use a computerized yard-management system to handle inventory, generate work orders, and optimize performance, essentially determining what gets done when.

Gate clerks use handheld devices to keep track of freight entering and leaving the yard by truck, while crane operators use a GPS-enabled computer in their cab to manage the intermodal containers as they’re transferred to and from trains.

Still, there are challenges. Temperatures can get cold, and any accumulating snow needs to be cleared because trucks must be precisely situated for the crane to do the requisite lifting.

“These cranes are very efficient,” Yelle says, explaining that the dwell time — the time between a truck’s arrival and departure — is 20 minutes. “That’s very low compared with the industry standard,” Yelle says. “It’s driven by the efficiency of the cranes and the technology system.”

While CSX owns the Valleyfield terminal, CSX Intermodal Terminals outsources the actual operation, including crane-work and other related activities, to Parsec Intermodal of Canada, which is owned by Cincinnati, Ohio-based Parsec Inc.

“The railroad’s core business is to move freight via rail,” says Parsec general manager Mike Collette. “So they’ve found it beneficial to contract intermodal terminal operations to third-party contractors specializing in that type of work.”

Not all intermodal rail yards use cranes. In fact, Valleyfield is the only yard in Canada where Parsec hoists with cranes. Canadian Pacific Railway and Canadian National Railway operate cranes at their Toronto facilities, but yards in Winnipeg, Regina and Vancouver, which Parsec operates for CP Rail, use sideloaders.

Curren and Collette say cranes work from a single point, moving up and down a track, while sideloaders are more mobile and flexible.

“Cranes are better for unloading track in sequence,” Collette says. “They start at one end of the track and offload as they’re running.”

Sideloaders, on the other hand, are mobile, so if there’s a priority lift they can go directly where they’re needed.

Sideloaders also make sense when containers don’t need stacking and sorting and can instead be transferred directly between railcar and truck.

The use of sideloader or crane also depends on a terminal’s design. Cranes generally require extra support underneath a regular concrete or asphalt surface.

Older terminals tend to have sideloaders, though cranes have been used for about four decades, and some terminals have both. “Terminal design, substructure, operational constraints, as well as business make-up will normally be factors considered for equipment selection,” James Curren adds.

While Valleyfield’s three cranes are rubber-tired gantries, Parsec and other service providers also use rail-mounted gantries at some facilities.

Hyvinkää, Finland-based Konecranes manufactures both kinds of gantries, as well as sideloaders and reach stackers, which combine a truck with a boom that can extend for stacking purposes.

Jussi Suhonen, the company’s port cranes sales director for the Americas, says rubber-tired gantries are typically smaller than rail-mounted gantries, and the rail-mounted structure can accommodate a wider span and include outreaches outside the span.

Suhonen says the two gantries and accompanying software are relatively straight-forward for operators to learn, and Konecranes offers training for operators new to particular machines.

“They are rigid cranes,” Suhonen says. “They don’t shake or rattle like some of the older gantry cranes … and we have cabbing on top for optimal view of the whole operation.”

Mi-Jack rubber-tired gantries equipped with an onboard DGPS-mapped system produced by AccuSteer can self-steer, while Mi-Jack’s in-house AccuStack system tracks inventory movements three-dimensionally within a yard.