Features
What goes down must come up: Cranes erect roller coaster at Canada’s Wonderland 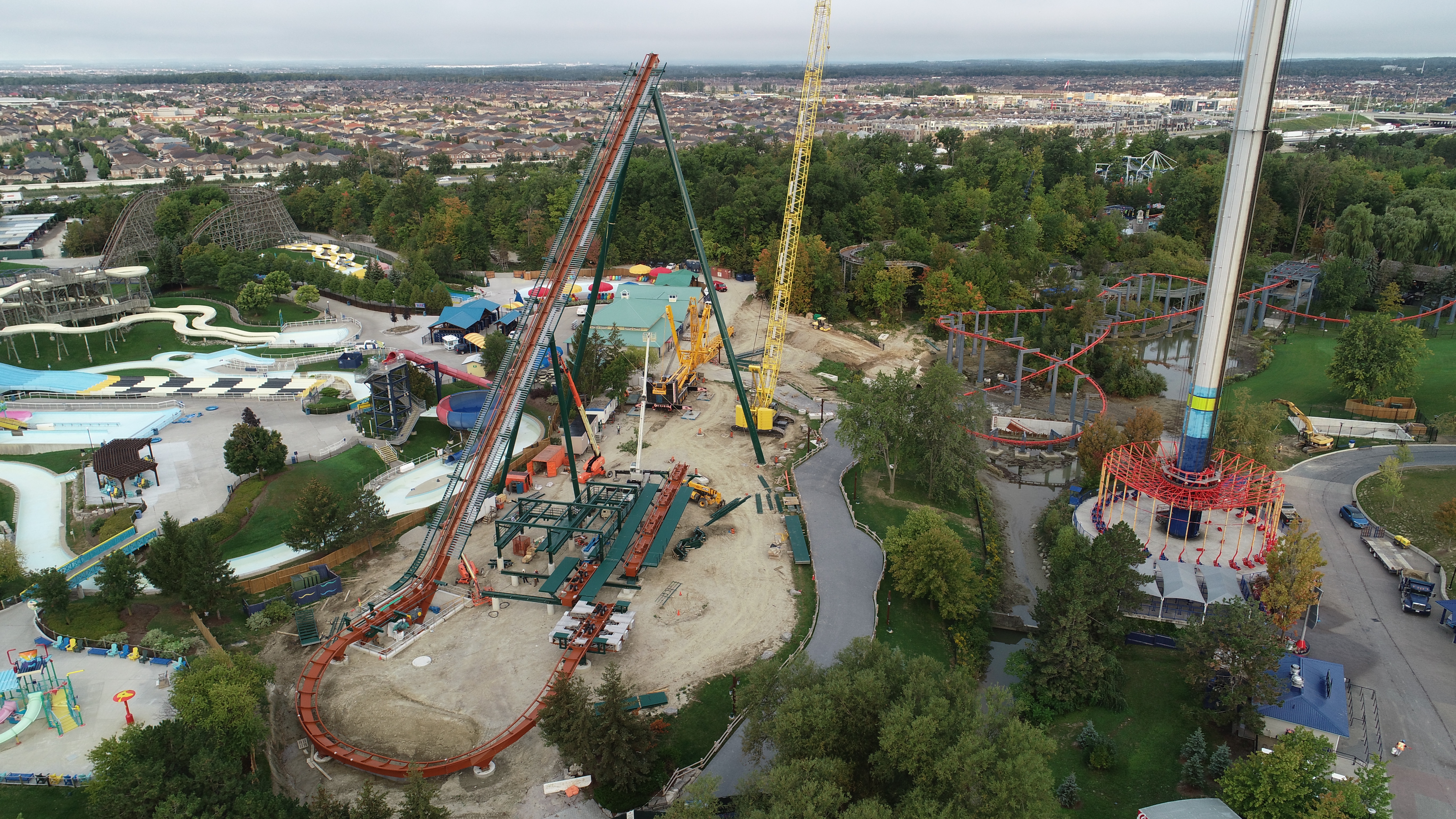 When using cranes to install a roller coaster, it’s perhaps only fitting that work crews experience the ride of their lives.

The Yukon Striker will not only be the newest kid on the block but one of the wildest when Canada’s Wonderland theme park north of Toronto re-opens for the season in late April.

Imagine ambling along at moderate speed, hovering briefly at the precipice of a 90-foot drop, then plunging 75 metres at 90 degrees into an underwater tunnel.

Currently in its final stages of installation, the Yukon Striker is billed as the world’s tallest, fastest and longest dive coaster. The Swiss-built ride is 1,105 metres long and designed to reach speeds of 130 km/h, drop 75 metres in a single dive, and soar through four inversions including a complete 360-degree loop. The coaster features one of the world’s largest inversions, where the tracks — and the world — flip topsy-turvy.

Peter Switzer, director of maintenance and construction with Canada’s Wonderland, said the park last installed a new roller coaster in 2012. Seven years later, a refresh was due. Management purchased the Yukon Striker from Bolliger & Mabillard, which designed it and manufactured the steel track, support columns, trains and controls.

Riders will be able to thank a flock of cranes for the experience. With so much steel, crews called in multiple heavyweights. In fact, a one-day lift of the drop section alone required five machines.

Bill Woods, general foreman with the project’s structural erector, E.S. Fox, described the section as triangular in shape, with a base more than 61 metres long overshadowed by two supporting columns, each one metre in diameter, meeting at the top.

Crews hoisted this somewhat twisted structure in segments, with a 620-ton-capacity Liebherr LTM1500 mobile crane grappling one column and a 275-ton Kobelco CK2750G crawler holding the other. A 90-ton Tadano GR900XL rough terrain crane was used to lift a motor that would be attached, while a 75-ton Tadano GR750XL rough terrain crane and a 45-ton boom truck handled additional connections that were spliced on.

“We had a boom truck and an RT crane with man-baskets to access the splices, then once the splices were made and the A-frame was assembled the 620 (Liebherr) was cut loose and transferred to the top of the A-frame and the Kobelco was disconnected,” Woods explained, describing further splicing and binding of parts.

“It all sounds easy but of course things don’t line up perfectly,” Woods added. “With a coaster everything’s got to be perfectly aligned within one or two millimetres. We had to use big hydraulic jacks beneath the column legs and also some cables to manipulate the columns in such a manner that we could attach it all and make it all line up correctly.”

With a roller coaster, every piece or segment is unique, heavy and awkward, and considerable heights are involved.

On one patch of raised ground, crews had two 300-ton cranes — a Demag AC250 and Grove GMK6300L — working in tandem with a boom truck to erect what’s known as an Immelmann. Named after an aerial combat repositioning manoeuvre, an Immelmann is a section of track where riders reach the top of a loop and return to a level position. “It’s got a twist in it,” Woods explained.

Perhaps the toughest aspect of the job was working within tight confines. While surrounded by wide-open spaces, the park itself is a tight-knit network of rides and concessions as well as artificial hills and a small mountain.

Crews typically used the 75-ton and 90-ton rough terrain cranes to offload the coaster sections, place them in a lay-down yard and put them on trailers to be shunted to the location where they would be erected. Some pieces would go up as one, others were spliced together, and a handful, including columns, required more than one crane to place.

One particularly complicated part of track, the lift section, will direct riders upwards on a 47-degree angle, with the pitch 70 degrees in places. “These pieces are 144,000 pounds (65.3 tonnes) each and approximately 120 feet (36.6 metres) long and going up 207 feet (63.1 metres),” Woods said. “They’re flat on the ground and you’ve got to use 20-ton chainfalls and other heavy rigging to manipulate the pieces to get them situated and ready to install. And they’ve got a big drive motor at the bottom and all kinds of components. We put that up with the LTM1500 and a Iuffing jib.”

Another challenging task had cranes set up in an existing artificial pond into which the Yukon Striker will descend by means of a tunnel before re-emerging near a small mountain.

Because Wonderland remained open daily prior to Labour Day and on weekends until Halloween, crews had to drain the pond prior to setting up for a day or week’s worth of work.

As the job winds down — final touches include using one of the smaller cranes to install the ride’s three 9.4-tonne train-like cars — Woods said he looks forward to commissioning the coaster in March so it’s ready when the park re-opens in April.

“You might think a roller coaster can’t be too hard,” Woods said. “But, roller coasters aren’t flat. Every piece has to be rolled, twisted and rigged. A lot of times you could roll the pieces with the crane if you had a main line or an auxiliary line. But it took a lot of rigging, chainfalls and come-alongs to fine-tune them.”

Peter Switzer has seen this kind of crane work many times given his role supervising construction at a theme park. Still, he said he’s impressed with how crew members handled the learning curve involved with erecting a complex coaster.

Switzer said a supervisor from Bolliger & Mabillard has been on-site throughout the project’s duration, providing guidance.

With Wonderland at capacity footprint-wise, Switzer knows adding new rides always presents a challenge. The park removed an older stand-up coaster back in 2014 to make room for the Striker.

“There’s multiple factors that go into a decision like that,” Switzer said, adding that a ride’s popularity and overall costs also influences a park’s roster. However, space is clearly a factor. “It’s like building a ship in a bottle,” he said. “It’s not a traditional site by any means.”

To learn more about the Yukon Striker, visit: www.canadaswonderland.com/play/rides/yukon-striker