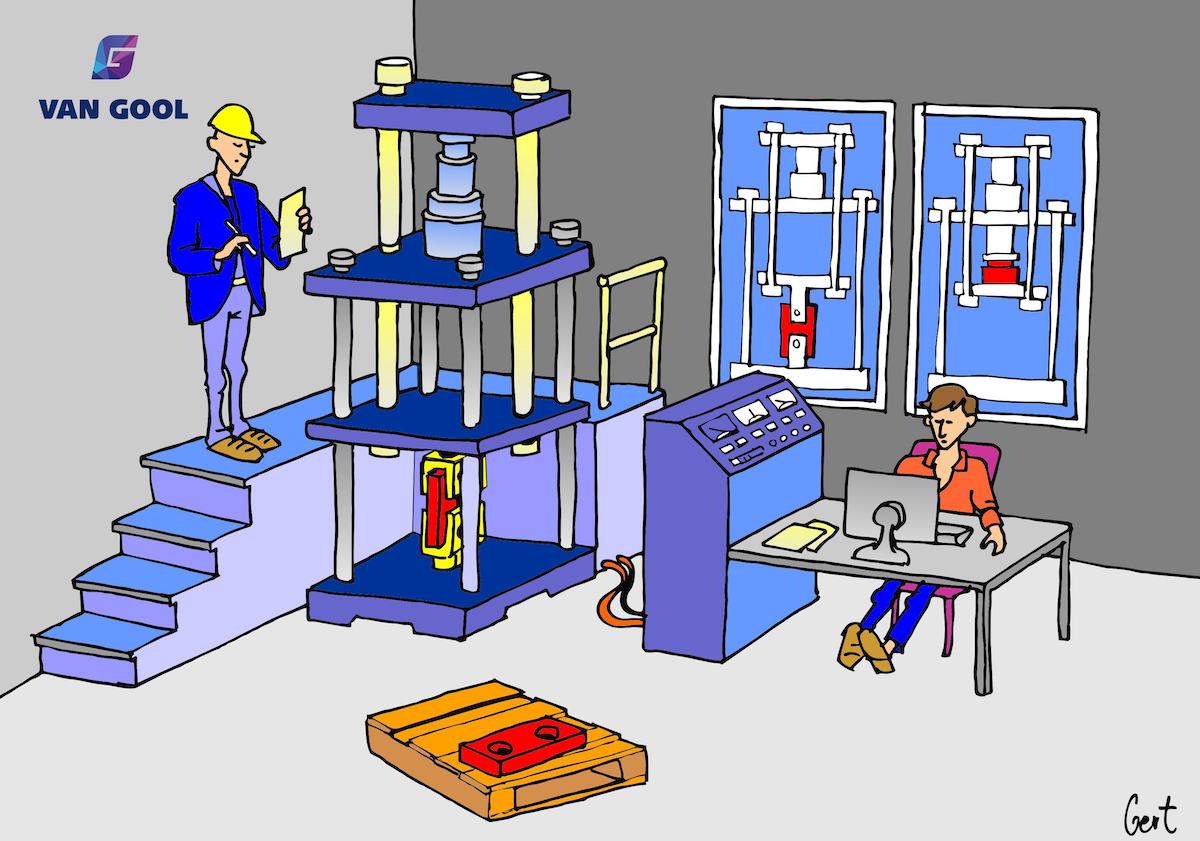 Lifting and rigging equipment supplier Van Gool is awaiting delivery of a 350t capacity calibration rig that will be installed at its facility near Amsterdam, Holland in March.

The machine, which will test force measurement equipment in tension and compression, will join an existing 35t dynamic testing system, a 55t tension testing rig, and a 100t static tensile testing machine. The latest addition means Van Gool will now calibrate equipment worldwide. It was specifically chosen based on its compatibility with UK-based load cell manufacturer Straightpoint’s (SP; part of The Crosby Group) extensive range of products, which Van Gool distributes to the Dutch market.

Calibration is the correlation of the readings of an instrument to check accuracy. Load cells—the wireless Radiolink plus is SP’s most popular product—are calibrated upon manufacture or distribution, and recalibration is the periodic repetition of that process. The majority (90 per cent) of tests carried out with the new machine will be on SP products, while Van Gool will continue to receive load cells and shackles that have been calibrated at the Hampshire manufacturing facility in southern England.

“We believe that we are the first lifting and rigging company in the world to have calibration capacity up to 350t, other than dedicated testing laboratories. There are other companies that calibrate on horizontal test rigs, which might be used for testing chain slings, but we are not aware of anyone who has purchased a vertical machine purely for calibration of load cells—and at this accuracy,” said Pieter van Duijn, commercial director at Van Gool. “As such, installation represents a significant investment and a landmark moment for our company and the service we offer our customers. If an instrument is not calibrated it cannot give a true and accurate measurement of the load, which is fundamental to safety.”

The vertical universal machine is accurate to Class 1 and is designed to test standard industry size load links and compression cells to 350t. The unit itself is third-party calibrated by Holland’s NMi, an independent specialist in the sector, to ISO 7500-1:2015, which specifies the calibration and verification of tension / compression testing machines. Tensile load cells will be calibrated in the lower section and compression load cells in the upper part of the frame.

The machine is designed using dimensions from SP’s load cells ranging in capacity from zero to 350t, but additional load pins and reducing bushes will be included to house a much broader range of load cells. The Enerpac hydraulic ram is a standard double acting, 700 bar item that is controlled using a 230v, single phase, electric pump with a fine control valve. In use, the load application will be gradually increased using that control valve until test completion.

“The rig arrives at an opportune time, when business is being generated by the offshore and shipping, towing, crane and other markets—in hoisting, lifting and weighing applications,” said van Duijn. “However, it remains important to continue to evolve, innovate, and add value to be successful in the long term. This investment is indicative of our commitment to world-class safety standards and the sectors we serve.”

The machine was funded by Van Gool’s own resources; van Duijn said that he is confident of achieving a return on investment within a few years, even based on a “no cure, no pay” business model, meaning if it is unable to calibrate a load cell the customer will not be charged.