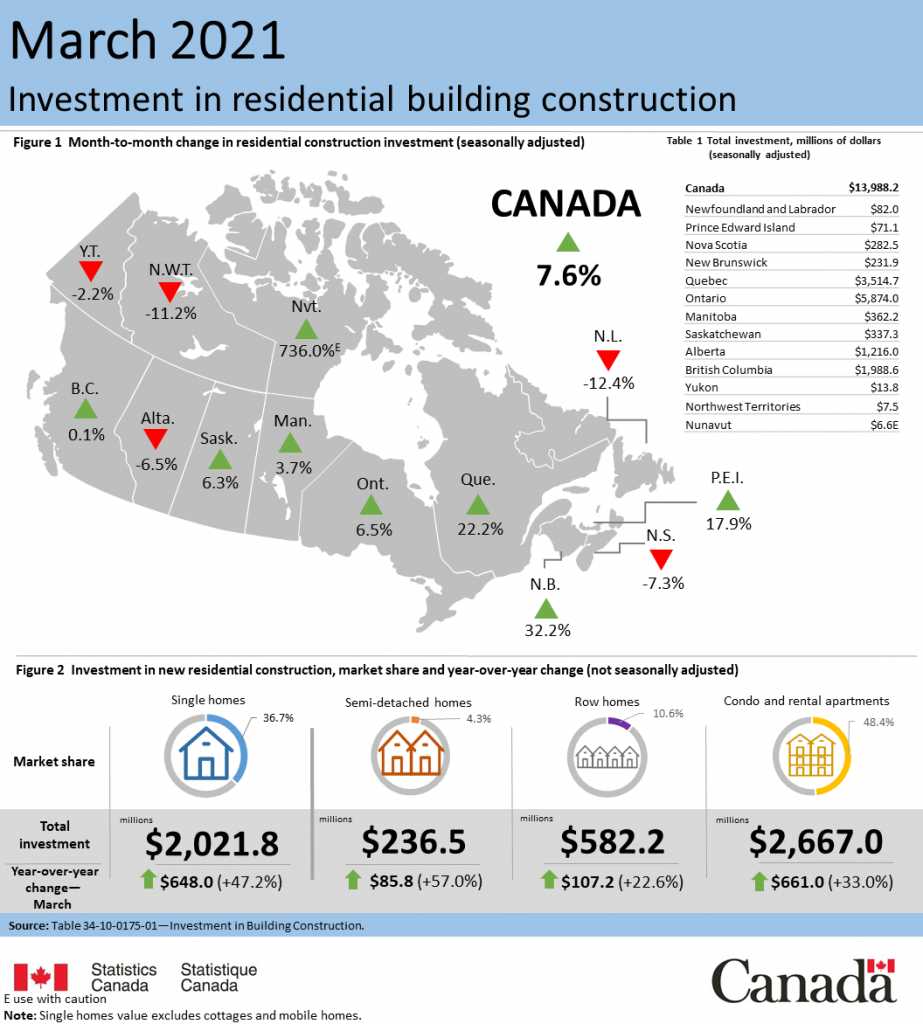 Total investment in building construction in Canada increased 5.9 per cent to $18.6 billion in March, led by the residential sector, according to new data from Statistics Canada.

Residential construction investment increased for the eleventh consecutive month, up 7.6 per cent to $14 billion in March.

Growth in multi-unit construction continued, up 3.9 per cent to $6.2 billion.

Gains in Quebec and Ontario led the overall increase in this component, as six provinces reported declines. Both new construction and renovations of condominiums and apartments in the cities of Toronto and Montréal accounted for most of the growth.

Non-residential construction investment rose 1.1 per cent to $4.6 billion in March, with all components posting slight increases. Despite this gain, the commercial and industrial investment components were below pre-COVID-19 pandemic levels.

Institutional construction investment was up 2.2 per cent to $1.2 billion. Multiple high-value projects in Montréal contributed to a 2.6 per cent increase in Quebec, where investment totalled $315 million in March. Investments in the province included a new elementary school in Laval and renovations to a secondary school in Montréal.

British Columbia recorded another strong month in March, with the continued construction of new schools in Burnaby, North Vancouver and Vancouver.

Commercial building construction rose 0.8 per cent to $2.6 billion. Six provinces recorded slight gains, led by Ontario and Alberta. Large office building renovation projects in Edmonton and Calgary contributed to the 1.7 per cent gain in Alberta in this component.

The total value of investment in building construction rose 9.3 per cent to $53.1 billion in the first quarter, stemming from continued strength in the residential sector (up 12.4 per cent). Investment for residential buildings reached $39.5 billion, largely because of increased spending on single units in Ontario (up 21.8 per cent) and Quebec (up 24.9 per cent).

Non-residential investment rose 1.1 per cent to $13.6 billion in the first quarter, following a six per cent decline in the previous quarter.

Institutional construction advanced three per cent in the first quarter, driven by strength in British Columbia and Newfoundland and Labrador, which recorded their highest levels for this component since the start of the series in 2010. Nova Scotia jumped 55 per cent, reporting the highest quarterly value since the third quarter of 2014.

Investment in commercial construction advanced slightly compared with the fourth quarter of 2020, with the gain largely due to strength in Ontario.

However, investment in this component was below pre-COVID-19 pandemic levels, down 13.8 per cent compared with the first quarter of 2020.

The industrial component edged down 0.2 per cent, largely as a result of declines in Alberta.