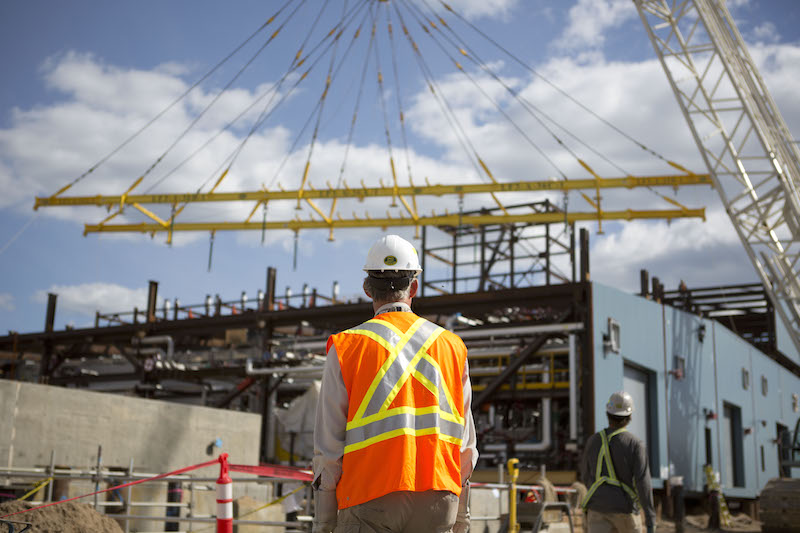 HeviLift software suite expected to save millions on construction projects

“If I go back even three to five years ago, no one would have believed it,” says Rick Hermann, manager of construction engineering for PCL Industrial Management Inc. Hermann and PCL have long been working on software to make their operations more efficient, safe and cost-effective. Through collaboration with academics from the University of Alberta, their efforts have gone further than anyone at PCL could have predicted. The result is a software suite titled HeviLift, which utilizes three-dimensional visualization to save millions of dollars on construction projects.

While one could go back as far as 19 years ago to trace the history of PCL’s collaborations with the university, the three-dimensional visualization aspects developed over the last couple of years. In 2014, a group of academics — including SangHyeok Han, Dr. Shafiul Hasan and Dr. Mohamed Al-Hussein — published a paper titled “Utilization of 3D Visualization of Mobile Crane Operations for Modular Construction On-Site Assembly.”

The authors did not concern themselves with developing software to this effect — there was already good 3D visualization software on the market. The intention of the paper was to develop a process and a procedure.

“Our intention is to develop a 3D visualization model of crane operations for any critical and complicated project where safety is an issue using the already available software which will assist the project manager or lift engineer in decision making,” says Dr. Hasan.

Dr. Al-Hussein says that a recent collaborative project with a crane company he worked on demonstrates the effectiveness of the model to determine choices and alternatives. In the project in question, company engineers were originally looking at a conventional crane and were concerned about maneuverability.

“They wanted alternatives and the alternative was a hydraulic crane,” says Dr. Al-Hussein. “But could the hydraulic crane fit? The body of the crane was larger than the conventional crane as was the Y-Guy of the crane that’s behind the boom. The only way to determine whether the crane would fit or not was a full 3D model. We’re looking for what we call a ‘sweet spot,’ where the crane can be set and do the pick without having to remove the crane.”

By a “full 3D model,” Dr. Al-Hussein refers to not just the geometric properties of the crane itself and surrounding objects, but also the movement of the lift from the initial location to the final location (not to mention other cranes and picks along the way in more complicated projects). The difficulty of this process is creating 3D models from scratch.

“Three-D visualization takes time,” says Dr. Hasan. “Now that I’m working with a company, there’s not much time. We’re working on more than 10 projects in a month and one 3D model takes nearly two weeks.”

It was SangHyeok Han and Dr. Al-Hussein who picked up the gauntlet for that challenge. Their current research is looking at a way to semi-automatically generate the 3D models.

“At the moment, there’s a proof of concept that’s being widely used,” says Dr. Al-Hussein. “With PCL, they have to move a large number of modules. The software determines whether a crane can do the lifts that are provided. You need the location where the modules will be delivered, the location where the modules will be installed and then where the location of the crane will be to minimize re-location of the crane if possible. All of this has been put into an algorithm and the work has been done over a good six or seven years with different students and people.”

Hermann and PCL utilized that academic work and nearly 20 years of collaborative effort to develop the software suite titled HeviLift.

“When I put the data into the database, I can auto-generate a model of the plan within a couple of minutes and by including the crane you can do the analysis,” says Hermann. “We generate hundreds of thousands of crane options as part of the analysis. I just ran one right now. I’ve got two million crane options, 600-some objects and three crane configurations. That’s how many options I can analyze within a day.”

From there, the analysis becomes about how to optimize the process and get the best results. The software’s logic accounts for the crane movements, determines any conflicts or causes for concern and calculates all the angles within minutes.

“You’re not just doing it one at a time, which I used to do in spread sheets back in the ’90s,” Hermann says. “Now we’ve got the whole thing automated. We can automate a million options and run analysis to see which one is the best one. Then we use date information — delivery date, potential set date — and try to optimize the crane sequence. Every time you move or reconfigure the crane, that takes time and that takes money. So we run a simulation program to reduce the time and costs. The less movements you have the better, the less time you need to change out the rigging the better.”

The software has already paid off dividends. Hermann says that on one PCL project, the original plan was to use a smaller crane in order to save money. But Hevilift’s analysis showed that by switching to a larger and more expensive crane the company could save on ground preparation costs and come out ahead. Savings from that project are estimated at $10 million.

“You try to work out the numbers of having a meter of ground prep to do and digging out the soft area and putting gravel down and putting mats down,” Hermann says. “If you rent a bigger crane, sure it’d be a little more but you save that much more in ground prep. You can save the client a lot of money.”

Hermann and PCL have presented at conferences to show what is possible with the software, but have found that the history — based on nearly 20 years of collaborations — is difficult to replicate.

“It’s hard for other people to catch up because there’s so much embedded knowledge and expertise in the program.”