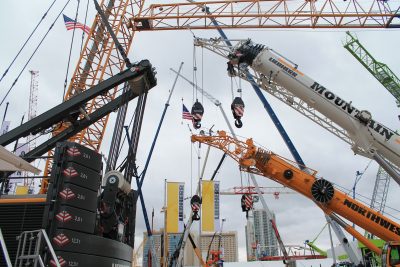 The U.S. Secretary of Commerce Wilbur Ross announced the Department will initiate an investigation into whether the quantities or circumstances of mobile crane imports into the United States threaten to impair the national security.

This decision follows a petition filed by Manitowoc in December, requesting that the Department of Commerce launch an investigation into mobile crane imports under Section 232 of the Trade Expansion Act of 1962, as amended. The investigation, to be conducted by the Department’s Bureau of Industry and Security, will provide the opportunity for public comment once the rule is posted in the Federal Register.

“We will conduct this review thoroughly and expeditiously,” said secretary Ross. “This investigation will help determine whether mobile cranes are being imported in such quantities or under such circumstances as to threaten to impair U.S. national security.”

Manitowoc alleges that increased imports of low-priced mobile cranes, particularly from Germany, Austria, and Japan, and intellectual property (IP) infringement by foreign competition, have harmed the domestic mobile crane manufacturing industry. The Department of Homeland Security has identified mobile cranes as a critical industry because of their extensive use in national defense applications, as well as in critical infrastructure sectors.

Manitowoc says that without import relief the armed forces and their contractors would become largely dependent on foreign producers of mobile cranes and also claims the low-priced imports and IP infringement resulted in the closure of one of its two production facilities in the United States and eliminated hundreds of skilled manufacturing jobs in Wisconsin.

Manitowoc cites the U.S. International Trade Commission’s (USITC) Dataweb to note that imports of mobile cranes increased 152 per cent between 2014 and 2019, and a 2015 finding that a Chinese manufacturer misappropriated six trade secrets and infringed on a patent, resulting in the USITC banning the sale of a Chinese crane in the United States.