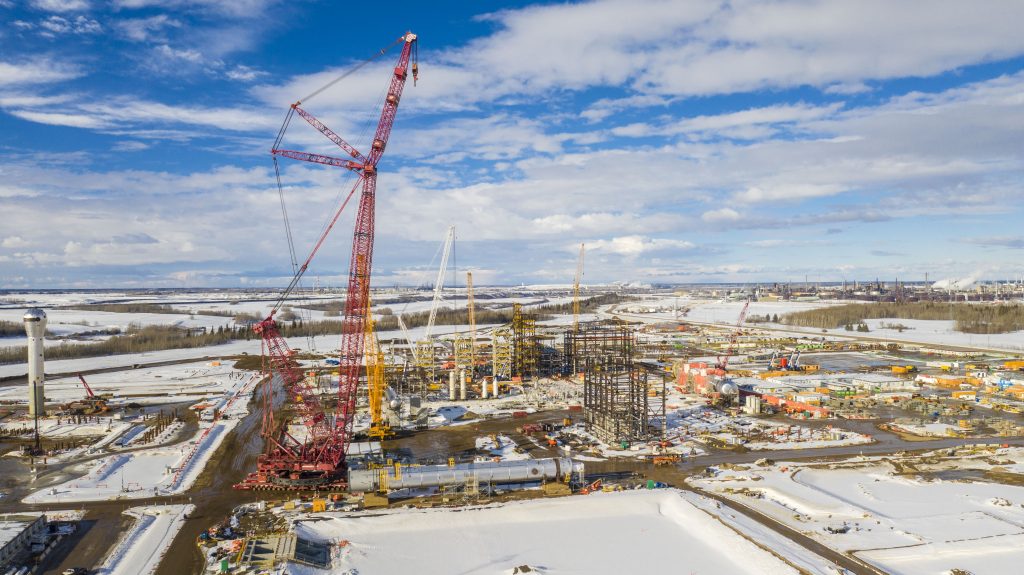 Mammoet, a global provider of engineered heavy lift services, is using cranes, hydraulic jacks and massive trailers with hundreds of wheels to help deliver several of the heaviest loads ever transported on Alberta highways.

The loads — six in all — involve enormous mechanical and processing units for a new $3.5-billion polypropylene manufacturing plant in Fort Saskatchewan, Alberta. The Heartland Petrochemical Complex, a processing plant owned by Calgary-based Inter Pipeline, will convert propane into plastic pellets for use in everything from computers and automotive parts to food containers and clothing.

Not only is the splitter the heaviest of the six loads Mammoet is shipping over the road for Inter Pipeline, but the provincial transportation ministry confirmed publicly this “historic super load” is the heaviest ever carried on Alberta highways.

When operations commence at the Heartland Complex, the splitter will separate propylene gas from the propane, essentially helping set in motion the conversion of propane into recyclable polypropylene plastic.

“We don’t lift stuff like this every day,” said Craig Middleton, a project manager with Mammoet. Crews used a 107-metre-long self-propelled modular transporter to move the splitter to a yard where it could be placed above the four jacks.

Crews attached each corner of the splitter to a corresponding jack and lowered it on top of the trailers with its 97 metres running lengthwise. The overall length of the transport configuration, including trucks and trailers, was 180 metres.

Manufactured by Scheuerle, a German supplier of modular vehicles, the InterCombi transportation system consists of two trailers side-by-side under each end of the load, each with 26 rows of axles, for a total 832 trailer tires plus another 80 tractor tires. “There were over 900 tires on the road with that load,” Middleton said. “It’s pretty crazy when you think about it.”

The InterCombi system included load spreading mats and saddles to even the weight distribution, and a turntable on top of the load spreader and underneath the saddles provided a pivot point for rounding corners. “Something that long doesn’t turn corners very well,” Middleton explained.

The 9.5-metre-wide load occupied much of the twolane roadway, so as the convoy crawled along at 10 to 15 kilometres per hour, crews directed opposing traffic to safe spaces on the side such as approaches, pullouts, and turning lanes. Likewise, the convoy periodically pulled over so vehicles travelling behind could pass.

Mammoet used up to 10 trucks to push and pull the trailers towards the final destination, arriving at the Heartland Complex three days later, on January 9. But the job was hardly done, with five loads remaining using various configurations of the same jacking and InterCombi trailer systems, with modifications for lighter loads.

A 63-metre, 682-tonne de-ethanizer stripper, which will separate ethane from propane, moved over four days in late January. Built by Dacro, it garnered second-heaviestload status for a few weeks until a 48.5-metre, 725-tonne polypropylene reactor edged it into third place. Manufactured by Cessco Fabrication in Edmonton, the reactor will convert propane into polypropylene resin. A 116-metre, 293-tonne de-propanizer, moved in late March, while a relatively small rectifier was slated to ship in May, and a 50-metre-long, 300-tonne purge bin is set to move in July.

The convoys followed an approved high-load corridor, which extended trips just beyond the suburbs into 150-kilometre journeys along an indirect path. This helped minimize the number of bridges, low-clearance overpasses and overhead wires. The transport crew used off and onramps to bypass a few remaining low overpasses, and while load-spreading mechanisms worked well, engineers reinforced one bridge with an I-beam structure.

Weather was another challenge. Travelling with the splitter, crews lost traction on one icy hill and had to hook up additional trucks to get moving. The reactor, meanwhile, took a couple weeks to reach its destination, delayed by temperatures plunging below the normal operating temperature range of the transportation equipment.

Why travel during the coldest winter on record in northcentral Alberta? Even with serious weight distribution, the procedure required a travel permit, which in turn required winter travel for the two heaviest loads.

“There’s seasonal restrictions with axle weights to prevent oversized loads like this traveling in the summertime,” Middleton said. “There’s the potential to damage the roads, so certain levels of frost are needed.”

The journey doesn’t end with the delivery of the vessels. Mammoet sourced a 430-foot-tall, 1,600-tonne PTC35DS platform twin-ring containerized crane from its global repository to hoist things into place.

Designed by Mammoet in partnership with Huisman Equipment, the ring crane has 24 hydraulic jacks underneath to enhance stability. The crane also requires two designated operators and a supervisor as opposed to a single operator.

Just getting the crane to site took considerable planning. The machine is designed to be reconfigured into selfcontained shipping containers for transportation on-board ships. Josh Tremblay, a Mammoet project manager who oversaw crane and other logistics activity at the Heartland site, says crews had to reconfigure container weights and sizes to travel over highways.

“Those containers were too heavy to transport over the road on standard trailers,” Tremblay explained. “Quite a bit of engineering went into that and it took 30 days of loading and transport just to get it from Texas to Alberta.”

When the crane arrived in October, crews used a 275- tonne crawler, a 180-tonne crawler and a 265-tonne allterrain crane to assemble it.

The manoeuvre to lift the 820-tonne splitter — upped to 975 tonnes thanks to piping, platform and related infrastructure that needed to be attached prior to hoisting — was extremely tight.

“We had to make sure it was precisely located so there wouldn’t be any interference for tailing the vessel,” Tremblay said. “Because the vessel was so heavy, the crane during the lift was at 97 per cent, so there was limited room for the operator to actually boom out further from the crane. We had to ensure the placement of the vessel, when it came on-site, was as-per the engineered lift study because we were playing with inches.”

Crews used a 750-tonne Liebherr LR1750 crawler for tailing. And, because the lifts are in slightly different locations at the outdoor facility, and it’s difficult to move the ring crane on its own, Mammoet configured a 76-axle selfpropelled modular transporter, also made by Scheuerle, to go underneath the jacks to drive the crane as needed.

Steven Noble, a spokesperson with Inter Pipeline, says massive industrial vessels are generally built where they will be installed in order to avoid complicated travel arrangements. But a cost-benefit analysis determined it was optimal to build off-site and do the extra heavy lifting, and the ring crane and InterCombi trailer system enabled this.

“It was an incredible feat of logistics,” Noble said. “The complexities were extensive, so when the splitter and the reactor were put into place with the ring crane, these were significant milestones that everybody at Inter Pipeline was really thrilled to see finally fall into place.”

Noble said it’s hard to fathom anything big and strong enough to lift 975 tonnes. “You see the crane arrive in rail containers and then they build it like a Lego set over three weeks. If you’ve never seen it before you wonder how that’s all going to come together. And then all of a sudden it’s hoisting these giant vessels in an incredibly short period of time.”

Until now, Canadian producers have shipped propane to the U.S. for conversion into polypropylene before reimporting it at a higher cost.

“The significance to the project is really the story of diversification,” Noble said. “Finding new ways to use the oil and gas products that we have and for the province to expand its economy and get our products to different markets by means other than pipelines. The impact of hundreds of millions of dollars coming into Alberta each year once this project is operational will be felt nationwide.”