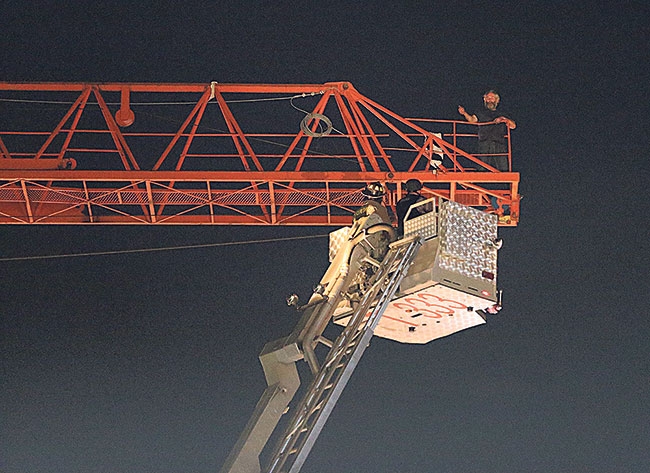 Toronto emergency services continue to deal with situations involving people climbing cranes on construction sites in the city. Late on the night of Aug. 2, Toronto Fire Service (TFS) and Toronto Police Service (TPS) responded to an incident where a man broke into a construction site in the Dundas Street East/George Street area, climbed a large tower crane and was threatening to jump.

The incident follows one, which took place in April, where the rescue of a woman who climbed up a crane and down the main hoist line onto the pulley drew national media attention.

“I was fearing the worst,” says TFS Platoon Chief Donald Beam, who was among the crews who responded to the Aug. 2 situation. “He was jumping up and down; you could see the crane arm move. It did not look good there for a while.”

Beam says that when officials arrived on the scene, the man was yelling incoherently and threatening to jump from the jib of the tower crane. A TFS aerial truck, Tower 333, was brought into position and luckily the tower was the right height to bring a police negotiator to the top of the jib.

“The police negotiator was doing a fantastic job talking to him, trying to keep him calm,” says Beam. “He did become calm when we gave him cigarettes and water and some food. There was a restaurant nearby so we sent some chicken and potato wedges… and he ate some. That always seems to calm people down.”

After the uniformed negotiator calmed the man, a psychiatrist who works with the police in such incidents was brought in.

“He wasn’t up there very long and he convinced the guy to get into the basket by saying things like, ‘We’re all concerned about you, we don’t know what’s wrong,’” says Beam. “He got kind of emotional, he said, ‘You mean all these people really care about me? Who’s that guy in the white shirt?’ That was me, he kind of lied to him, he said ‘that’s the Deputy Police Chief, he came from home because he was so concerned about you.’ That really calmed him down, that got to him. They have to use whatever tactics they use to get people to respond, but it all worked out well. It’s part of their negotiation training, the psychiatrists know how to read those people better than I would.”

Media reports of the incident say the man was arrested under the Ontario Mental Health Act. TPS confirmed that the man had been apprehended and brought to hospital, but did not specify whether he had been charged with a crime.

The incident reminded many of the so-called “crane girl” incident the morning of April 26, when Marisa Lazo was rescued from the pulley of a crane. In that case, an officer with the TFS had to climb up above the pulley and rappel down to reach the woman. Platoon Chief Kevin Shaw was on scene and says that while the logistics for the April rescue were more challenging, it was a far different situation because Lazo was not what they would deem an EDP – an emotionally disturbed person.

“I think it was a misadventure for her,” says Shaw. “When our guys got there, she was trying to shimmy her way up that cable. She probably went down 40 to 60 feet on that cable to where she was sitting. There was no way she was climbing that cable so she could climb back down the crane. I heard later, there’s a lot of whackjobs around here who get up on construction sites and up on the roof and take selfies, but I do not believe she even had a phone with her.”

Lazo was charged with six counts of mischief by interfering with property. Whether the charges serve as a deterrent against others remains to be seen. While the Aug. 2 incident was obviously a different type of situation, TFS Captain William Bygrave says that the frequency of such incidents is trending up – he noted an incident where thrill seekers climbed a crane and fled into the night before officers could reach them had occurred just days before he spoke to Crane & Hoist Canada in September.

“It’s not common – it’s not like every day that people are climbing these things,” says Bygrave. “But 10 years ago it was unheard of. If it’s the selfie thing, I don’t know, but it’s definitely more common than it was 10 years ago.”

For a closer look at the mindset of a thrill-seeking crane climber, see “His Life In His Own Hands,” Crane & Hoist Canada issue Nov/Dec. 2016).