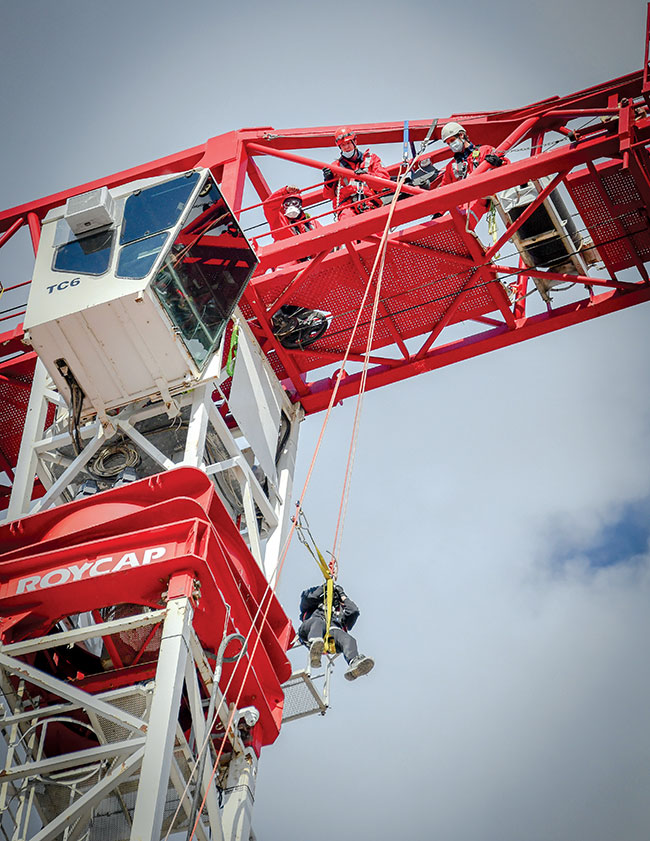 Crane operators are comfortable lowering and raising valuable loads, but for one Toronto operator the load was the most valuable of all – his own life. On March 31, a tower crane operator at York University began experiencing chest pains and Toronto Fire Services (TFS) performed a daring aerial rescue, bringing the operator down through the use of a skate-block system so that he could receive medical attention.

“With the assistance of the rigging team on the ground [TFS] were able to gain access to the operator,” says John Davidson, divisional chief of technical operations with TFS. “To actually assist him back down the ladder system wasn’t appropriate due to his medical condition. The crews went up top, did a quick medical assessment and reported down to Toronto Emergency Medical Services, who also responded with the unit.”

The crane operator was already wearing a harness, so TFS officers were able to quickly connect him into a skate-block system. A skate-block system is effectively like a zip-line but designed for controlled movement with built in redundancies to ensure safety if anything goes wrong. TFS attached anchor points at the top of the crane and at the ground.

“It’s nerve-wracking,” says Davidson, of being lowered in the system.

“It’s kind of weird, as any human feels when they’re off the ground. But it does work and there is redundancy in the system that if one line breaks the other is built to capture the weight. So, there’s technically a fixed line and then a moving line.”

In cases where the subject needs the assistance of a rescuer to make it down the line – either due to nerves or their medical situation – both parties are connected to different lines. In that way, if one line breaks the other will still be in place. In this case, the crane operator was capable of being lowered by himself. But to prevent his harness from putting too much pressure on his chest, he was placed in a second larger harness-like device called a Pitagor, which was connected to the other line to provide an additional level of redundant security.

“Once they got him all hooked in, they actually got him over the rail and he was brought down on his own,” says Davidson. “He was still conscious, and he was verbal.”

It took roughly 45 minutes from when TFS arrived on scene until the patient was on the ground. The actual descent from the top took about 10 minutes.

“We didn’t know what his comfort level was,” says Davidson.

“Obviously, heights don’t bother him, but we wanted to make it as comfortable as possible without jerking and stopping so we brought him down in a nice, controlled manner.”

Davidson says that the operator was calm and seemed much more concerned about his chest pains than he was about being lowered from a height of nearly 30 metres.

“There was no verbal from when he was on the line, like ‘get me out of here,’” says Davidson. “Some people, sometimes they freak out. If you haven’t been through it before or haven’t been on rope, it can freak you out. And there was no rescuer with him to be that comfort level. But he was quite calm, I didn’t hear a peep out of him.”

These types of rescues are a rarity for TFS, but Davidson says that they are well prepared for them – they have a decommissioned tower crane that is used for training.

The crane operator was taken for medical attention. His employer, Premform Limited, was happy to confirm that he had since recovered and was back to work.

Toronto has the most crane activity of any city in North America. With that comes an increased chance of collapses, malfunctions, and even dramatic incidents, such as the infamous “Crane Girl” of 2017. John Davidson says that after two crane collapses took place in the city within a few weeks of each other last year, he decided to get more proactive.

“We’ve really struck up a strong relationship with the Operating Engineers Training Institute of Ontario (OETIO),” Davidson says. “The executive of the organization reached out and said, ‘We had something running about five years ago, developing an awareness level training program for emergency services,’ so we jumped all over it.”

In cooperation with OETIO, they are developing a three-module set of online learning tools designed to bring a shared knowledge base to emergency services and crane operators. The first module, which has been completed, covers general knowledge about cranes and their parts. The second module will go more in depth into crane operations, controls and safety mechanisms. The third module will be more for the benefit of crane operators themselves – teaching them about Toronto Fire Services’ equipment and rescue systems and how those systems could work with cranes.