Features
Syrian refugees find a home on the Prairie 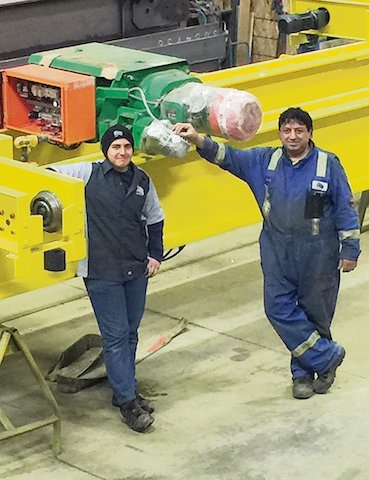 As the first of 25,000 refugees from war-torn Syria arrive in Canada, a Saskatchewan man and the crane company he works for are doing their part to help a few of them settle.

Carlo Arslanian, general manager of fabrication for Indoc Crane Services Ltd., was born in Syria and upon hearing of the crisis was concerned that family members could be in trouble.

“I figure if I’m going to save somebody, I might as well save family,” Arslanian said with a laugh. “I put word out to all of my family members and asked if anyone needed any assistance of any sort. Maral and her family put up their hand.”

Arslanian’s family moved to Australia when he was very young. So he only met his cousin Maral Kasarjian once, on a childhood trip to Syria with his mother.

Maral and her family of seven, including husband Kevork and son Menas, lost their home in

bombings in Syria. They were in Lebanon while Arslanian ensured their passage into Canada by working with the Roman Catholic Diocese of Saskatoon, a sponsorship agreement holder working with the federal government to bring in refugees.

Their former homeland is no more

“There is no Syria left for them anymore,” Arslanian said. “The old Syria is gone; all that’s left is a pile of rubble. They watch the news every day, ‘who the heck wants to go back to that’ is what they say. They’re quite happy making a new life here.”

Part of that new life includes employment at Indoc, which specializes in overhead, gantry and jib cranes, working with brand names such as Condra, Mizia, and Kito. All the steel work is done in-shop by their large fabrication arm. Within Indoc, Menas is working as an apprentice to a mechanic while Kevork, a machinist by trade, is currently working as a general labourer.

“(Kevork) does all my steel cutting and measuring and what-have-you for me,” Arslanian said. “Indoc’s vision for the future does include a machine shop. Once we have that machine shop set up, he will just take that and run with it.”

Nick Pryma, Indoc’s service manager, said that the Kasarjians are fitting in very well at Indoc and that the company was happy to help out.

“Lending a hand to anybody that’s human is important to any company,” Pryma said. “We take care of our employees, either local or foreign. If I was in that situation, I’d hope that someone would help me out.”

Pryma says that both Kasarjians have been taking language classes to improve their English skills.

“Menas’ English was already there,” Pryma said. “When you spoke to him, you could tell he knew what you said but he didn’t know the words to reply with, where Kevork wasn’t quite up to that part. Now that the classes have started, Kevork is up to where Menas was and Menas is bounds and leaps ahead of where he was.”

Arslanian said that as Kevork and Menas work and attend classes, the rest of the family is adapting to Canadian life as well. The three younger children are all enrolled in school and Maral is also attending classes. To truly integrate into Canada, however, there is one rite of passage remaining — braving the harsh cold and snow of the Canadian Prairie winter.

“They don’t understand what I mean when I say -30,” Arslanian said. “I said, ‘No, no, no, you need to get warm clothing.’ They roll their eyes. I said, ‘I tell you what, the first day it gets -20, I will throw you outside for a minute and you’ll beg me to get back in.’ They just think their big cousin is full of shit. Well, I’ve lived here for 10 years — I know how cold it gets. They’ll learn.”