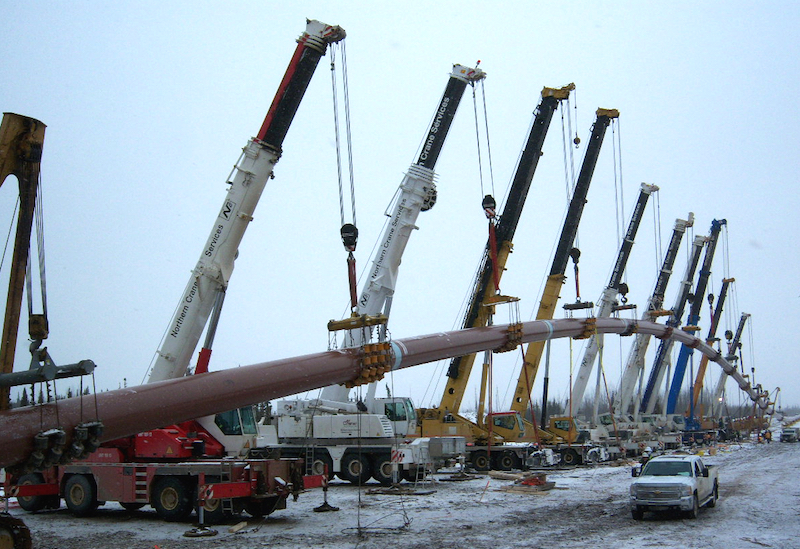 Industry insiders weigh in on what various pipeline ventures

If the new oil pipelines the Trudeau government approved in November are actually built, cranes will play a supporting rather than a leading role and will benefit from increased economic activity, industry players say.

In Western Canada, in particular, the heavy equipment sector has felt the effects of a slumping oil sector. John Stevens, president and CEO of Entrec Corporation, an Acheson, Alta.-based supplier of cranes and related services, says he’s hopeful the decisions could begin to turn things around.

“Cranes aren’t used a lot on pipelines, but they’re used to support the construction of compressor stations and that type of thing,” Stevens says.

Acheson, an Edmonton suburb, isn’t far from the oilsands, where Stevens has seen considerable growth during the last decade or so. However, Alberta and other oil-dependent regions have experienced a massive slowdown thanks to slumping oil prices.

With some larger oilsands projects having come to an end or been paused, Stevens says he doesn’t anticipate new large-scale projects there in the next couple of years.

However, Stevens says he’s buoyed by the federal government’s approval of Kinder Morgan’s Trans Mountain pipeline and Enbridge’s Line 3, though the decisions are muted by the denial of Enbridge’s Northern Gateway and the fact that a final decision on Energy East is still pending.

“In the long run it’s going to be good because we won’t see growth in Canada unless we have the capacity to get our product out of here and out to different markets,” Stevens says.

Stevens says he’s mindful of the role cranes play in building and maintaining oilsands projects and the network of pipelines to deliver the product to market, and so he sees longer-term value.

“With the big oilsands projects, a lot of crawler and rough-terrain cranes are used in construction,” Stevens says. “Then, when you get to the maintenance side of things, you use a lot more all-terrain cranes.”

For pipelines, however, cranes will help with pump stations and related infrastructure, whereas the pipes themselves generally call for sidebooms, small boom trucks, and other specialized equipment.

So, for a province that’s been seeing cranes shipped to more economically fruitful pastures, all eyes are on any business and construction activity any new pipelines generate. That, Stevens says, means it will take time before the crane industry sees growth and corresponding activity return to previous, higher levels.

As business manager with the International Union of Operating Engineers local 793, which represents operators in Ontario and Nunavut, Michael Gallagher says he’s disappointed Northern Gateway didn’t get the go-ahead.

“There’s an awful lot of hysteria around pipeline construction, oil or gas, yet we’ve been doing them for a hundred years and have been very safe in constructing them,” Gallagher says. “There’s a lot of pipelines that people’s homes are backed onto all throughout Canada and there’s never been any issues.”

While he’s hoping the government will give the green light to Energy East, which would transport oil to refineries in the Maritimes, Gallagher praises Prime Minister Justin Trudeau for taking “a very balanced approach” to the decisions made thus far.

“He approved several of the pipelines that had very positive Energy Board reviews and met all the requirements, and that was really the first approval of any pipelines we’ve had in this country for quite a long time. Even the previous administration, which was very pro-development, was unable to actually build any pipelines.”

Gallagher says he’s especially pleased Trudeau participated in the pipeline announcement in person. “He didn’t have to do that, but by being there himself he showed support for the industry and sent a message to everybody that he’s going to take ownership of the issue,” Gallagher says.

While pipelines don’t generally call for large cranes, Gallagher agrees the long-term impact should be helpful, and says his members also operate sidebooms and other heavy machinery that will be used.

“Operating engineers do more than operate cranes,” he says. “They operate bulldozers, sidebooms, and large excavators and loaders. So it’s quite a lot of jobs.”

Ted Redmond, president and CEO of NCSG Crane & Heavy Haul in Edmonton, cautions that it’s a long way from approval to actual construction.

“Some of the environmental groups are saying they’re going to mount legal challenges, so that could potentially slow the pipelines down,” Redmond says.

Projects also take time to get off the ground, so the economic benefits might not fully materialize for a while. “It takes two or three years to build a pipeline,” Redmond says. “Then you have to have other projects being built to take advantage of the pipeline to create the employment.”

“They (pipelines) would help reduce the transportation costs, which helps make some of the larger upstream oil and gas projects more cost-competitive,” Redmond says. “Some of the oil gets moved by rail, but it’s cheaper to move it by pipeline.”

Other industry players are taking a wait-and-see approach. With Energy East still up in the air, Alan Neumann, chief financial officer of Winnipeg-based Able Crane Services Ltd., says he’s not entirely sure what the future holds.

“I’m always hopeful,” Neumann says. “But the problem is the slowdown in Alberta and Saskatchewan. A lot of the guys there are coming here now.”

Neumann adds that Able Crane has kept busy enough with expansion work undertaken by Manitoba Hydro, as well as a variety of commercial jobs. “This (pipelines) would be maybe a blip on our radar for a year or two but we’d still be servicing our big customers going forward.”

Matt Hnatuk, general manager with Prairie Crane in Saskatoon, says the economic slump means companies wanting to participate in renewed activity will be especially aggressive, and that could have an impact on profit margins at the end of the day.

And with most of the serious action for cranes in the Prairie provinces likely coming upstream from the pipelines, Hnatuk is less focused on the pipes themselves and more on the surrounding infrastructure.

“There’s lots of people sitting, so any investment in infrastructure and expansion is good and will help the economy,” Hnatuk says. “But for us I don’t see it being a huge deal. I see it being an average-size job — nothing compared to a job at a refinery or an expansion at a potash or uranium mine or anything like that.”

At NCSG Crane & Heavy Haul, Ted Redmond says future economic prospects for the region ultimately come down to the global price of oil.

“The oilsands probably need $65-plus oil (per barrel) for the projects to begin to become economical,” says. “It’s not happening yet, but we’re starting to get close with $50 a barrel oil. So the price of oil is trending the right way. A year ago it was $27 and no projects were economical, but at $50 new projects are getting close to being economical. It’s just a wait-and-see game on what happens with the price of oil.”

Of course, the global price of oil won’t be settled in Alberta or anywhere else in Canada. However, one piece of the complex puzzle lies south of the border, and the election of Donald Trump and a Congress and Senate dominated by Republican Party politicians who have traditionally been friendly to fossil fuels.

Redmond says he anticipates support for the Keystone XL pipeline, which would run north-south to refineries in Texas.

“It’s been a longstanding policy of the Republican Party to support the completion of the Keystone XL Pipeline, so it’s likely that Congress will approve it and the president will not veto it,” says Redmond, who becomes chair of the Crane Rental Association of Canada in June. (Redmond’s comments came before President Trump issued his executive order to approve Keystone XL.)

“Ninety per cent of our revenues have (traditionally) come from oil and gas, and we’re down to about 75 per cent, now,” Stevens says. “We operate in the U.S. in the Permian Basin (in west Texas) and in North Dakota, and we’re looking to expand to other places in the U.S., as well.”

At IUOE Local 793, meanwhile, Mike Gallagher worries about U.S. protectionism under a Trump administration and says this is all the more reason to boost resource development and production north of the border.

Also concerning, Gallagher says, is the risk to Canada’s auto industry if Ford, General Motors, and Chrysler are impeded from manufacturing in Canada and shipping product to the U.S.

“That would be a blow to the stomach of our economy,” Gallagher says. “So that’s all the more reason for us to support Energy East and also resource developments like the Ring of Fire (in northern Ontario). It means developing our resources, it means refining most products here, and it means perhaps finding markets in China, Asia and other places in the event we have difficulties in our trade relationships with the U.S.”