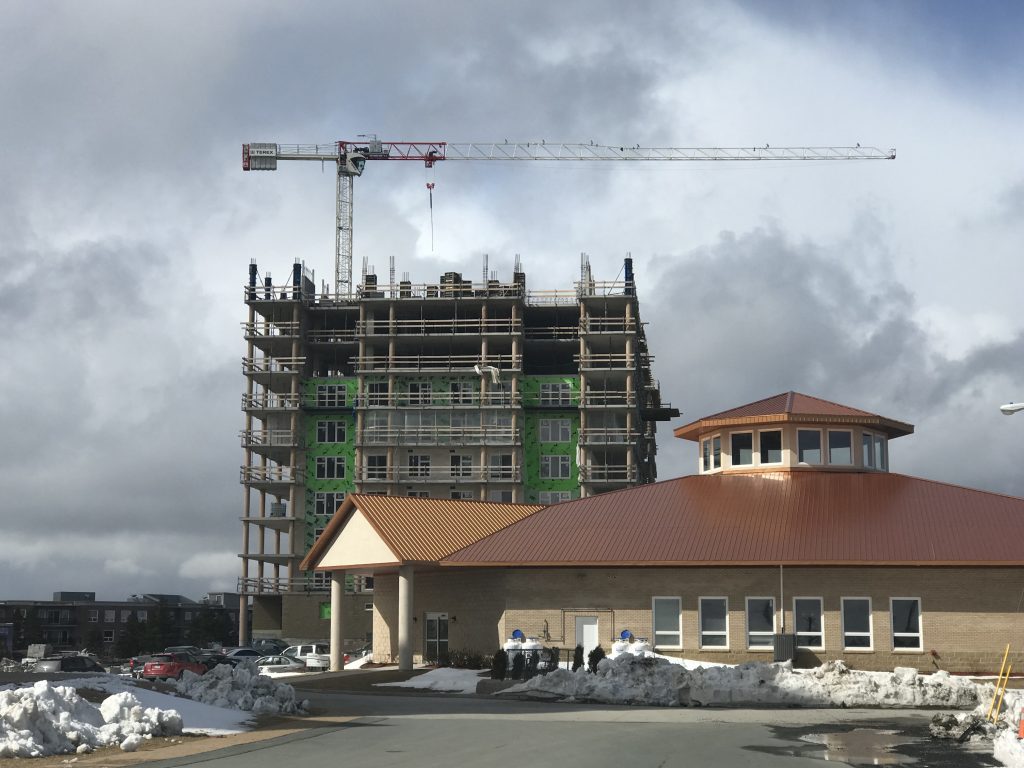 A Halifax developer’s brand new tower crane is playing a key role in the construction of 400 luxury apartment units.

Earlier this year, Cosmos Developments took delivery of a brand new Terex CTT132-6 flat-top tower crane and immediately put it to work on the second of its four 12-storey Grandhaven Estates apartment buildings in the city’s Clayton Park West neighbourhood.

The four buildings, laid out in circular formation, will have a swimming pool and recreation centre at their heart. But it’s the towers, themselves, that propelled company president Peter Giannoulis to make his first foray into the world of tower cranes.

“I had limited experience with them,” Giannoulis said, explaining that, until now, his projects have all been low-rise, at seven storeys or less. “When required, we sub-contracted a mobile crane.”

Cosmos bought a used a Liebherr HC 130 from another local developer for the first of the four buildings. When that building was completed, Giannoulis decided to sell the machine and find a newer one.

“It was quite old — I believe it was built in 1979 — and not surprisingly it had a lot of problems; a lot of breakdowns,” he said.

Giannoulis consulted with colleagues, scoured the internet and considered his options.

“I looked at a couple of used cranes. One guy was asking for $150,000 for one, but it didn’t look like it was well-maintained. I looked at the frame structure and there was a lot of rust. I just didn’t feel comfortable. I didn’t know what I’d be getting into.”

Giannoulis set his sights on a new machine, deciding it would be more cost effective than acquiring another used model, albeit one that would be much newer. Lost productivity due to breakdowns was the deciding factor, he explained.

Eventually, Giannoulis settled on Terex as a manufacturer and the CTT132-6 as the model best suited for the medium-rise projects he envisions building in the near future.

While the crane cost roughly $370,000, Giannoulis said Cosmos entered into a lease-to-buy arrangement with Cropac Equipment, which holds exclusive distribution rights for Terex tower cranes in Atlantic Canada’s four provinces as well as Quebec and Ontario.

Giannoulis said this kind of arrangement is more cost-effective in the long-term than pure rental because monthly rental costs tend to be high whereas lease payments are not only lower but, in the end, help finance something his company owns.

Lease-to-own might be Cosmos Developments’ plan when the fourth building is completed. “We have some possible plans of doing more projects that we’re currently looking into,” Giannoulis said. “And if I’m not using it I can always sell it.”

In the short period of time Cosmos has owned the crane, maintenance has been straight-forward. A local company, SOS Electric, erected it, and Terex flew in a mechanic from New York to assist.

When SOS Electric later had to modify the brakes and safety limiter to cope with the strong winds Halifax frequently experiences, Terex again supplied a specialist, this time from Italy.

“Terex included all that in the sale,” Giannoulis said.

“We have a lot of wind here,” Giannoulis said. “We’re at the highest point in Halifax, elevation-wise, at about 460 feet above sea level, and the winds are especially high in the winter.”

During a couple of nor’easters — powerful storms which pound North America’s East Coast — winds were so blustery Cosmos shut down crane operations entirely.

“It’s too dangerous to use the crane on those days,” Giannoulis said, adding that operators are required to shut down when wind speeds exceed 55 kilometres per hour.

Most days are fine for operating, however, and when the second building is completed, Giannoulis said the crane will be immediately moved to commence work on the third building, with the fourth following immediately afterwards.

“We’re using it for everything, not just the formwork and concrete buckets,” Giannoulis said. “We use it to lift up the steel studs, the windows, the roofing materials, the drywall sheets, the flooring, the granite countertops — everything. Whereas most developers around here, all they do is just the concrete and frame structure of the building and then the crane comes down, we’ll have it there from the beginning of construction to the end.”

James Graham, who manages the tower crane side of Cropac’s business, said the CTT132-6 has a 65-metre jib and a 6-metric-ton maximum lifting capacity.

The CTT132-6 is a fairly recent model, launched in 2016 to replace an earlier CTT121 model that offered a 55-metre jib and a 5-ton capacity. What makes it flat-top?

“The jib and the counter jib,” Graham explained. “It’s all level across the top. Instead of relying on pennant bars and an apex to hang it, all the stress is run through the jib itself.”

While tower cranes are nowhere near as prevalent in Canada’s four easternmost provinces as they are in the country’s larger commercial centres, adding Terex’s Atlantic Canada distributorship to Cropac’s roster is still significant, Graham said. “It’s an emerging market. Construction is busy all across Canada, but there has been considerably more tower crane activity in the Atlantic provinces in the last few years than there has been previously. So it’s good for us in a territory that we already service with mobile cranes, and it’s good for Terex because they have some representation in that area, someone knocking on doors.”

As for Cosmos Developments and Grandhaven Estates, one of the benefits of owning a tower crane and having it on-site throughout construction is the builder has access to hoisting whenever they need it, Graham said.

“If they receive deliveries early in the morning or after hours, they have hoisting all day long at their job site, compared to where a customer might have to hire mobile cranes to offload materials and work around scheduling.”

Does it always make sense to own a crane, or are there times where rental might be optimal? It depends on the situation, Graham said. “If you have three to five years worth of work you’re planning to do, a machine like that absolutely makes sense.”

As for lease-to-own, Graham said this can also makes sense at times. “If you have a long enough duration project you can build some equity in the machine through a rent-to-purchase option while not committing to it entirely. So if you come to the end of your project and find you have more work lined up, you can buy that asset at a lower cost and use it on your next project.”