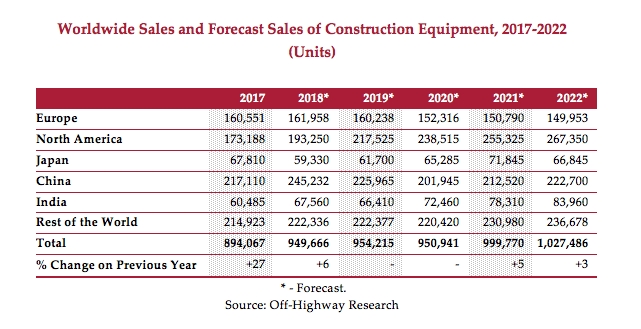 
In North America, the construction equipment market rediscovered its buoyancy last year following a year of declining sales in 2016 as uncertainty swirled around the outcome of the presidential election. With a strengthening economy, historically high construction output and the need to renew an aging fleet of machinery, equipment sales picked up in 2017.

Global construction equipment sales rose 27 per cent in 2017 to 894,000 units, according to new data from the specialist forecasting company. This was the highest the market has been since 2012, and was a marked turnaround from 2015 and 2016 when worldwide equipment sales bottomed-out at 702,000 units.

“Most countries around the world saw an increase in construction equipment sales last year, with the most robust growth being in developing Asia,” said Chris Sleight, managing director of Off-Highway Research. “There was a sharp turnaround in China and the Indian market continued to go from strength to strength. Growth elsewhere in the world was more restrained, but this was still welcome after what were difficult years in 2015 and 2016. Over the coming years, Off-Highway Research expects moderate but sustained growth in construction equipment demand around the globe, taking sales to more than 1,000,000 units by 2022.”

China has endured a savage boom and bust cycle over recent years, with extraordinary highs in 2010 and 2011 on the back of the government’s stimulus plans being followed by five years of sharply falling equipment sales. The market enjoyed a striking rebound last year due to a slew of new infrastructure projects. Among other things, this saw demand for crawler excavators in China more than double in 2017, compared to sales levels in 2016.

Another notable market in Asia is India, which continued its robust performance. Construction equipment sales in India grew by some 10 per cent in 2017, continuing the momentum of the 36 per cent surge seen in 2016, and taking demand for equipment to a new record high.

All countries in Western Europe enjoyed improving construction equipment sales last year. The most robust growth in percentage terms tended to be in Southern countries. However, volumes in these areas remain at a historically low ebb compared to levels prior to the global financial crisis. Countries in Europe where volumes are good include Belgium, Finland, Switzerland and, most significantly, Germany, while demand for construction equipment in both Norway and Sweden surged to all-time highs in 2017.

New global volume and value service plus
Off-Highway Research is exhibiting at Intermat in Hall 6, on Stand EF024, as part of the U.K. Pavilion. It is using the event to launch new market intelligence products. Among these is the Global Volume & Value Service PLUS. This builds on the company’s existing Global Volume & Value Service, which provides worldwide equipment sales broken down by country and equipment type in unit (Volume) and U.S. Dollar (Value) terms.

The enhanced PLUS Service provides greater detail, with sales by up to six weight/size classes per product type, again in unit and Dollar terms. This provides 524 data points per year, compared to 224 in the standard Service.

This rich pool of information is expected to be of particular interest to clients who require a deeper and more detailed knowledge of international markets.

In addition, both the PLUS and standard Volume & Value Services have been integrated into Off-Highway Research’s online database system for ease of use alongside its other data products, the International, Chinese and Indian Database Services.

All Off-Highway Research database products include historic figures and five-year forecasts, and the database is now available in seven languages.

Off-Highway Research is a management consultancy specializing in the research and analysis of international construction, and agricultural equipment markets, and is the largest of its kind in the world.