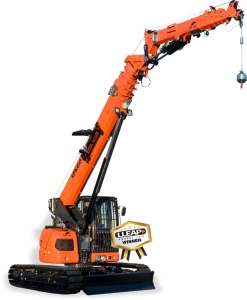 Jekko launched a number of new products at the recent bauma 2019.

The flagship model will be the SPX532 with a full electric lithium-battery motor. Also available with a diesel engine, the SPX532 is an ideal crane for indoor operation and for all those activities requiring a machine as little as to go through a single door. This mini crane is equipped with geometric control system and easier-friendly software designed in-house that make the operator’s work simpler.

The Jekko radio remote control also has new features: a more user-friendly interface for easy and intuitive management of the countless options as well as automatic and fast functions for simpler operations.

Jekko will also focus on the first hybrid version of a mini crane: the SPX1280HYB. This latter is the evolution of the SPX1275: it features a maximum load capacity increased from 7,500 to 8,000 kg and new hydraulic systems. With a three-extension hydraulic JIB, the SPX1280 is one of Jekko’s most popular mini cranes.

On Jekko’s stand at the Bauma expo there was also an SPX312 and an electric lithium-battery SPX424, traditional models of the company.

JF Series
Most of the show was stolen by model JF990, which will be launched on the market as an evolution of the most successful JF545 and JF365. The new JF – developed by Jekko in partnership with Fassi – is a further generation of the previous models in the JF line that pioneers a new hoisting concept of articulated crane: the traditional truck-loader crane becomes a crawler crane. The JF990 is the world’s largest mini crane featuring a loading capacity of as much as 100 ton/m and, despite its dimensions, a weight not exceeding 23 tons. The machine can be equipped with a counterweight that raises the weight to 28 tons and, similarly to model JF545, it can work in both horizontal and vertical position, it can pass or dodge an obstacle, and it can operate in hook or winch more or with a selflevelling platform.

Minipickers & Tele-Crawler Crane
For several years now Jekko has been investing in the sector of battery-powered industrial hoisting and road transport machines in pick&carry mode not exceeding five tons. These minipickers are increasingly functional and ensure full supplies on site. Minipickers are also used with Jekko hydraulic manipulators or vacuum lifters for handling and laying of glass panes.

During the Bauma expo Jekko showcased the new model MPK06 with a 600-kg load capacity. The machine is equipped with four wheels instead of three and special tires can be fitted for off-road operation. This pick & carry minipicker is the first having 100 per cent electric actuators and the one on display at the Bauma expo was fitted with manipulators designed for handling and laying of glass panes.

Finally, the SPK60 will also be present at Bauma: a tele-crawler crane with 6 ton of maximum capacity and three tons of pick & carry.

Vacuum
Building on its corporate experience in the glass handling sector and first worldwide in fitting vacuum manipulators to mini cranes, Jekko unveiled a new series of vacuum lifters for flat and curved glass panes. These vacuum lifters have a double pump with blow-off function for easier release.

J-Connect – Telemetry
Jekko has invested on bidirectional connectivity for Internet connection of the mini cranes. Remote monitoring and assistance are available via a dedicated portal. This system is applicable to the JF series and to the traditional mini crane range.