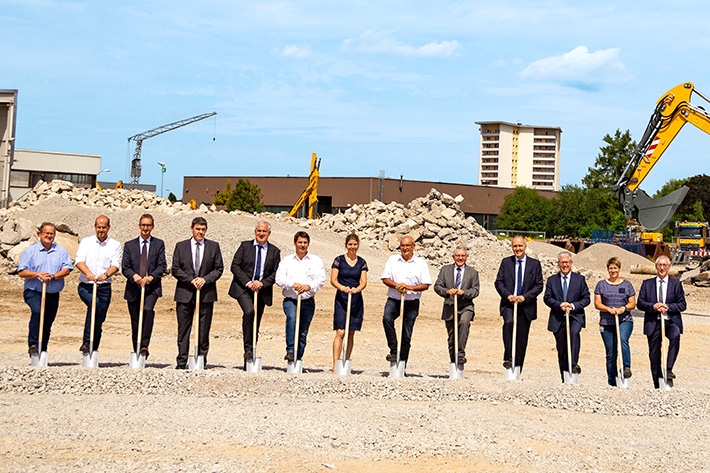 The managers and project managers of Liebherr-Hydraulikbagger GmbH broke ground together with representatives of the Kirchdorf community as well as the commissioned construction company.

Liebherr-Hydraulikbagger GmbH starts a new investment in the future in Kirchdorf an der Iller, thus strengthening the development of the original location of the overall Liebherr Group. The first construction phase of the logistics centre for production started on June 11, 2018 with an official ground-breaking ceremony. Liebherr will invest a total of around 35 million euros in the project. The project is planned to be completed at the end of 2020.

Liebherr-Hydraulikbagger GmbH continues its works development for a successful and competitive future and invests in a new logistics centre for production at the premises in Kirchdorf. With the aim of healthy company growth, the company pursues the strategy of improving its work processes and increasing its customer focus. “With the restructuring and the optimization of the material flow, the logistics centre for production will make an important contribution in the future to efficient and high-quality production”, states Matthias Herzog, production manager at Liebherr-Hydraulikbagger GmbH. In his speech he thanked both the shareholders of the Liebherr family for their trust and the community of Kirchdorf and its Mayor Rainer Langenbacher for the support.

Following completion the new logistics centre for production will have an overall dimension of around 245 x 96 metres and a height of about 22 metres. In the first construction phase, which should be completed by the end of 2019, a new incoming goods area with a high-bay warehouse is to be built. The planned air lock for lorries with a 20t crane system will greatly facilitate the acceptance of goods. In the second stage another high-bay warehouse and logistics areas for order picking, consolidation and packaging are to be erected. The workstations will be set up with modern technical systems and the complex logistics requirements will be supported by a warehouse management system. For day-to-day work modern picking vehicles with a driving assistance system are available to the employees.

The big challenge of the project lies in the fact that the demolition of the existing warehouse and the construction measures are taking place during ongoing operations. In order to be able to guarantee the material supply in production, the construction is realized in two stages. In addition, Liebherr is currently using several outdoor areas for the storage of production material.

Kirchdorf an der Iller is considered the birthplace of the Liebherr Group. Hans Liebherr founded the company there in 1949 on the basis of his parent’s construction business. Today Liebherr-Hydraulikbagger GmbH develops and produces a comprehensive range of high-quality hydraulic excavators, material handlers and articulated dump trucks in Kirchdorf. The company produces approx. 3,000 machines a year and is one of the leading manufacturers in the world in the area of wheeled excavators.

The managers and project managers of Liebherr-Hydraulikbagger GmbH broke ground together with representatives of the Kirchdorf community as well as the commissioned construction company.