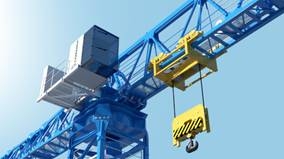 Manufacturer COMANSA announced during the Bauma trade show in Munich the upcoming addition of another model to its wide range of large Flat-Top tower cranes.

The new 21LC1400 will be available worldwide from September 2019 and will come in two versions, with maximum load capacity of 50 or 66 tonnes (110,230 or 145,500 lb). The main expected application of the 21LC1400 is to work in PPVC and infrastructure projects, but this new model will also provide the best performance in any other site in which it is necessary to lift very heavy loads.

Like COMANSA’s most recent large models, the 21LC1400 will feature a modular design of the counterjib to highly reduce the counter-radius in constrained jobsites. A new single and compact trolley has also been designed for the 21LC1400 instead of COMANSA’s double trolley system, standard in other models, as this new crane will work mainly in projects in which the maximum load capacity is needed in almost every lift, like PPVC.

Also announced in Bauma was the upcoming Quick Set, an electronic limitation system that will reduce the set-up time of the cranes from three hours to 45 minutes, and will also reduce the number of staff during such operation. The new Quick Set will be available as an option in all flat-top models of the LC range and will be an important benefit for rental companies who have to dismantle their cranes and move them to another jobsite very often.

COMANSA will unveil more details about both novelties in the following months.

At Bauma, COMANSA displayed the 50 tonne (110,230 lb) Flat-Top model 21LC1050, which was the largest hammerhead crane at the Munich show. This crane has a maximum radius of 80 metres (262.4 ft) with optional radius of 85 and 90 metres (278.8 or 295.2 ft), and was designed mainly for large industrial, infrastructure and PPVC projects, among others. The exhibited crane has been sold with full jib and mast configuration to rental company and Bauma co-exhibitor BKL Baukran Logistik, who will supply it to an upcoming modular construction jobsite of German contractor Klebl in Berlin.

Also displayed for the first time in Bauma was COMANSA’s Cube cab, which was at ground level for all visitors to see its fully glazed front, spacious design and all comfort features for the crane operator.

Bauma 2019 was another successful tradeshow for COMANSA as many customers, dealers and potential clients attended the manufacturer’s booth for enquiries and technical meetings.

Related
Bauma chooses Canada as partner for 2019 show
bauma 2019: New hall and site structure
Construction machinery industry on a high in bauma year
bauma 2019 in Munich at the ready
Tags