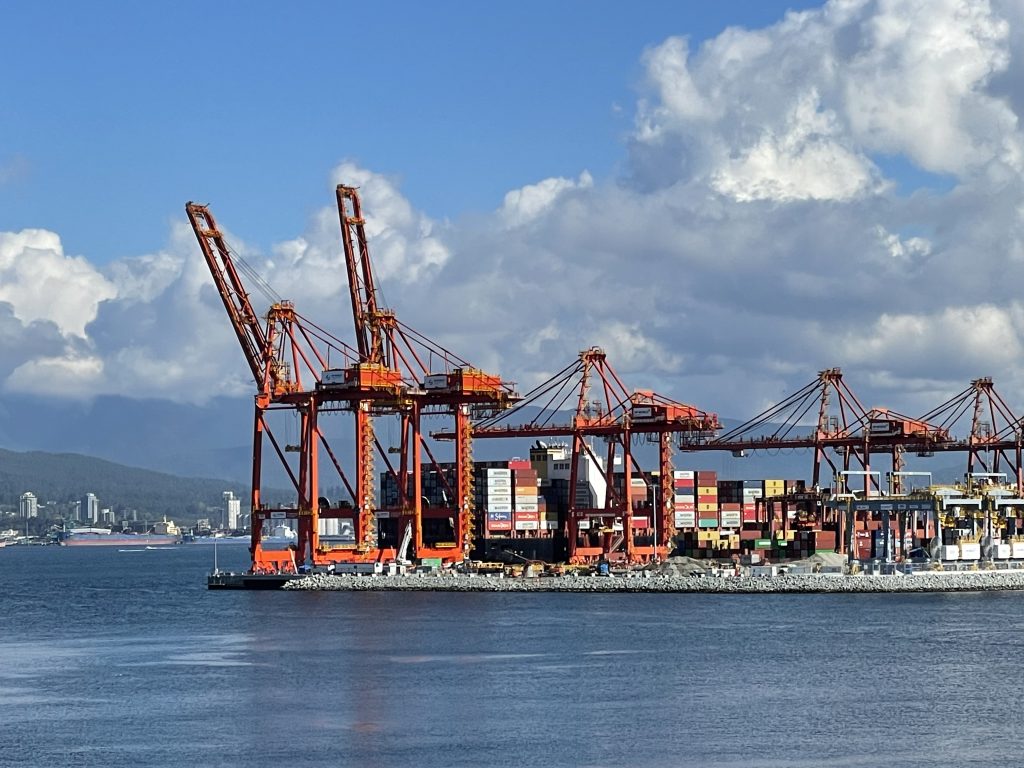 In 2019, construction began on a significant expansion project for the Centerm dock at the Port of Vancouver.

The project, designed to help meet increasing demand for containers shipped through the port, will allow the terminal to handle over 60 per cent more containers while only increasing the size of the terminal itself by 15 per cent.

A significant part of the project has been replacing older infrastructure with newer, more efficient models – such as two new container cranes which, after a few months of testing, will enter service before the end of the year. 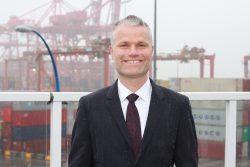 “These two cranes are replacing two 30-year-old cranes that we moved to a different terminal in 2020,” says Joel Werner, director of engineering and projects at DP World.

“These cranes provide larger and higher outreach and higher lift capacity, and they have a faster trolley and hoist. They’re more efficient, more capable, can service large vessels quicker to reduce congestion and keep the supply chain moving efficiently.”

The cranes were manufactured by Chinese firm Zhenhua Port Machinery Company (ZPMC). The cranes are described as “super post-Panamax cranes,” meaning they are capable of handing loads from vessels up to 24 containers wide with a 63-metre outreach.

The lift height is 47 metres, with the tip of the boom 124 metres high. The cranes are also capable of having the container spreader replaced with a cargo hook to handle project cargo or breakbulk moves, but those types of operations are not expected to be common.

“Our main hoist system, lifting in the vertical dimension, can run up to 180 metres per minute and the trolley speed is 240 metres per minute,” says Werner. “Much faster than the cranes they are replacing, which directly translates into more efficient, productive operations.”

The cranes are designed to handle up to 40 hoists per hour. Obviously, as Werner notes, operational complexities will impact that rate, but they will sustain 30 plus moves per hour throughout their 30-year lifespan.

DP World invited bids from the premier qualified crane manufacturers in the world for the project, as is their standard procurement practice.

“We have a rigorous specification and evaluation process. The reason we selected ZPMC is they were the preferential proposal that met our requirements, and they were able to deliver the best solution for us.”

While the cranes are manually operated and include cabins for crane operators, the cranes and the terminal are outfitted with smart technology that will take strain off the operators for repetitive elements of the lifting cycle.

One example is a smart landing system – a scanning laser profiles the vessel as the container crane’s trolley moves over it. As the operator hoists down, the crane can automatically determine where the container needs to land and can slow the speed in a controlled fashion, so it lands softly, quietly and with minimum vibrations on the cargo. This has obvious benefits for the cargo itself, but also for the community at large.

“This is quite an important thing when you have large cranes operating right beside downtown Vancouver,” says Werner. “Before systems like this, you could hear containers landing on vessels while you’re in downtown Vancouver. You could hear the contact. Now, with the soft landing that we’ve had implemented for the past several years, it’s essentially gone. It’s a key improvement.”

Werner says one of the interesting things about ZPMC is that they build the cranes in China fully erect and put them through a 24-hour endurance test prior to shipping. Deliveries to the inner harbour of Vancouver must first pass under the Lions Gate Bridge.

“Before systems like this, you could hear containers landing on vessels while you’re in downtown Vancouver. You could hear the contact. Now, with the soft landing that we’ve had implemented for the past several years, it’s essentially gone. It’s a key improvement.”

“These cranes had to be lowered at the factory, so the upper works from the girder and upwards was lowered down to the portal beam level,” says Werner. “One thousand tons of the crane were lowered. A self-erecting winching system was installed prior to shipment, so that when the cranes arrive on the boat and are offloaded, the cranes self-erect without the need for other cranes. There were a couple of small mobile cranes that come in with a person in a man-basket to perform a couple of tasks, but the lifting component was done entirely by the crane itself. It took just under a month to raise both of the cranes.”

Werner says that these two cranes are the last needed to be installed at Certerm for the expansion project, following five new overhead rail-mounted gantry cranes that were delivered earlier this year.

The Centerm Expansion Project is continuing alongside a related South Shore Access Project, focused on the creation of a new overpass and changing other roads in the area to remove port-related traffic from city roads and to reduce greenhouse gas emissions by reducing wait times for vehicles at train crossings.

Promotional material from the Port of Vancouver says that “exports of containers moving through the port support local and Canadian businesses shipping goods to and from global markets, helping to ensure that we can keep Canada open for trade around the world well into the future.”

This article appears in the November/December 2021 issue of Crane & Hoist Canada. Read the digital edition.