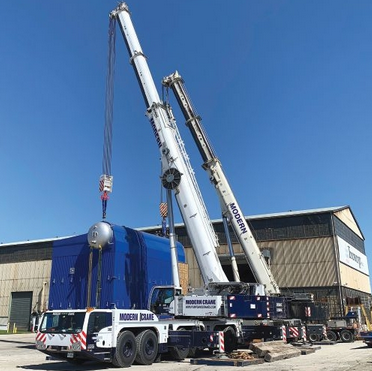 Mark Williams is the third generation in his family business – his grandfather founded Ontario-based Pumpcrete in the 1960s and his uncle and father were both involved in the business before him. Williams himself started with the company in 2001 and in that same year, company leadership saw cranes as a significant expansion opportunity and acquired a crane business called Modern Crane.

“We saw cranes as a world commodity,” says Williams. “You always need something hoisted; you always need something lifted. Installing a hot tub in your backyard to erecting a tower crane. There’s all kinds of different work. There’s always a need for cranes. And no matter where you are or what job it is, there’s only so much human muscle power that you can lift with.”

Today, most of Modern Crane’s work is taxi-style, providing both a crane and an operator for specific lifts.

But the company is also available for specific lift planning and, on rarer occasions, bare rentals in cases where a competitor might have a licensed operator but lack the appropriate crane for a particular job. They employ between 150 to 170 operators (depending on seasonality) in four locations between London and Niagara Falls, Ont.

“We try and get the Greater Toronto Area to Golden Horseshoe area coverage,” says Williams. “That way you diversify, and you can make travel time between a lot of the job sites around an hour, two hours. The majority of the equipment is in Milton, that’s our main ‘hub’ and the head office where everything is done paperwork-wise is in Niagara Falls.”

Williams says that Modern Crane has a varied customer base – as of late there has been a lot of road building and infrastructure maintenance work around the 401 highway but work with hydro companies is also very common. Williams says Modern Crane will take on any job that makes sense. And to serve that varied base, the company keeps a variety of cranes on hand.

Operating in and around Toronto, which has been a hotspot of tower crane activity in recent years, mobile cranes that can facilitate tower cranes are a particular focus.

“One of our latest purchases was a Demag AC 300,” says Williams. “That machine has a real nice chart, 262 feet of main boom and has tons of capacity for tower crane erection and dismantling.”

Even with cranes being a relatively new avenue for the Pumpcrete parent company, Williams notes that he has already seen significant evolution in the crane sector and the machines that drive it. Cranes these days have a lot more main boom capacities and are constructed out of much lighter materials.

“The tensile strength in the actual boom systems and the construction of the cranes have changed a lot over the years,” says Williams. “The other interesting thing I’ve noticed is the amount of computerization. For example, the AC 300 that we have and a few other cranes that are starting to come out now. The computer automatically calculates the chart based on what your outrigger positions are. That is really, really helpful.”

Keeping up with technology, advancements

For a company called Modern Crane, obviously keeping up on the modern advancements of the crane industry is particularly important.

“You’re always looking for the next biggest thing or next niche thing or the next beneficial thing for your customers,” says Williams.

“Especially when it comes to tight jobs like overhead crane erection. We do a fair amount of that as the city-class cranes come into play as well. You need to be able to identify your customers’ needs. It’s changed a lot and you have to stay on top of everything. There’s a lot of involvement that goes into studying charts and doing a lot of comparison amongst the manufacturers. ‘We’re going to be running these scenarios, which crane really has the strongest chart in this scenario.’”

One of the company’s most unique lifts came in 2012 when famed tightrope walker Nik Wallenda crossed Niagara Falls – Modern Crane was contracted to hold the wire in place for Wallenda’s death-defying stunt. Another significant job was erecting transmission lines from the Bruce Nuclear Power Plant to a station in Milton, which took about four years. Williams says it was very satisfying to safely execute a job of that complexity and duration.

“I’m a firm believer that everyone has to go home safe at the end of every day,” says Williams. “No matter what, safety is the absolute most important thing to us. I never want something like that under my belt, we want everyone to be safe. We’re quite extensive training our people – we don’t just hire people, we put them through quite the training process.”

The COVID-19 pandemic has been a significant challenge for companies in almost any sector, but Williams says that Modern Crane adapted quickly, writing a policy for new procedures early in 2020. From his perspective, adapting to the pandemic was just another extension of their commitment to safety.

“When we started seeing the first cases, we acted very fast,” says Williams. “We’ve been managing it well. We have not had any outbreaks. That’s terrific.”

Williams says the company is also committed to fostering an interest in the heavy equipment sector in young children. It’s important for the company to bring pumps and cranes to schools when the opportunity presents itself in order to demonstrate how the equipment works and how heavy equipment can be a lucrative and rewarding career.