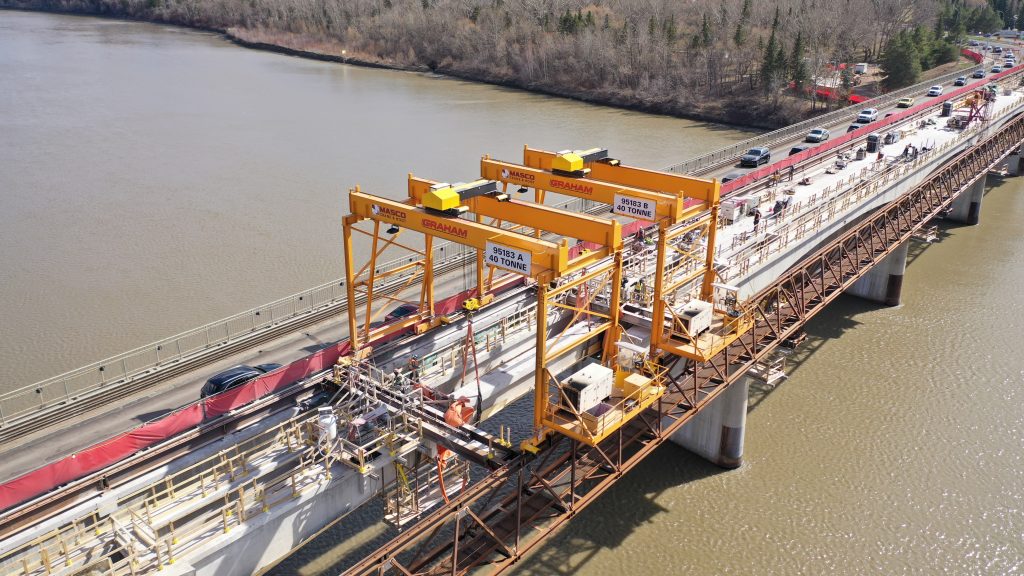 The construction is expected to extend the service life of the bridge by at least 50 years and to improve the functionality of existing sidewalks by widening them. MATT JONES

In 2018, the city of Edmonton announced a major three-year renovation plan for one of the busiest river crossings in the city, the Groat Road Bridge.

The bridge, which spans 330 metres across the Fort Saskatchewan River, had been constructed in 1955 and it has been almost 30 years since the last major work on the bridge. The construction is expected to extend the service life of the bridge by at least 50 years and to improve the functionality of existing sidewalks by widening them.

The work would require a specialized crane solution, so Masco Crane and Hoist were contracted to deliver one. Collaborating with Inkpen Engineering and Drafting, they designed, drafted, engineered and fabricated two 40-metric-ton live gantry cranes capable of operating in tandem to remove sections of the concrete bridge decking and girders and to install new steel structure girders. Masco named them Goliath Outdoor Gantry Cranes.

“In the past, the typical way of doing this was to build piers into the river bed and they would mount big mobile cranes down there,” says Masco vice-president Steven Beck, on why gantry cranes were the ideal solution. “To have mobile cranes down there would be quite costly and there would be environmental impacts. So they used the existing bridge piers to mount the support structure for the gantries so it was a very limited environmental impact on the river, the river bank or the surrounding area.”

There was no permanent power source on site, so each crane was outfitted with a 125 kVA diesel generator. Masco had to build a platform to mount those generators, as well as electrical components. Another challenge was that the end user wanted the crane to be able to navigate the gradeability of the bridge.

The crane also had to have an adjustable span, as the bridge was taken apart in two phases – one side of the bridge would allow traffic to pass while the other side was being worked on. But, due to the pedestrian walkway, the two spans weren’t identical. The cranes were built to accommodate the different spans, so that once one phase was complete, the gantry would be lifted and turned onto the other side of the bridge.

“We’ve got a fixed leg, a permanent leg that is with an angle brace under the girder to keep that rigid, but on the other side we have a pivoting leg, so that leg – as it travels down the track – is actually able to rotate around those pins,” Beck says. “We had to do that because there is going to be some variance in the span of the runway system just based on the movement of the bridge structure over the duration of the project, because we’re going from extreme cold in the winter to extreme hot in the summer, and there’s going to be a lot of movement in all the bridge structures, so there was some concern about the span changing during the project. We were able to make it pivot so that during the course of the project, if the bridge moves, it can accommodate without having to do a bunch of adjustments of modifications.”

Masco erected and installed them on site and did some early testing. They also completed on-site training with all the crane operators and certified them for use with those gantries and the specific lifts that would be performed.

“A regular crane course is going to be about a full-day course for this type of application and capacity of crane,” says Masco CEO Matt Beck. “This was a two-day course that was put on right at the bridge itself, day one was in the classroom with all of the operators going through the legislations, safe operating practices and how these cranes will operate in their safety features. Day two, we spent the entire day on the bridge deck, taking the operators through how to do a correct pre-shift inspection, how to start the cranes up, how to do lifts. It’s definitely a little bit different in that the cranes are very specific for these applications, right down to how they start up, how they use them, operating the remote controls in tandem and all the different safety features.”

Masco started fabrication in early May 2018 and started installation in mid-November. By January 2019, the gantries were fully installed, tested and in use. The Goliath Outdoor Gantry Cranes are expected to be in use on the bridge well into 2020.