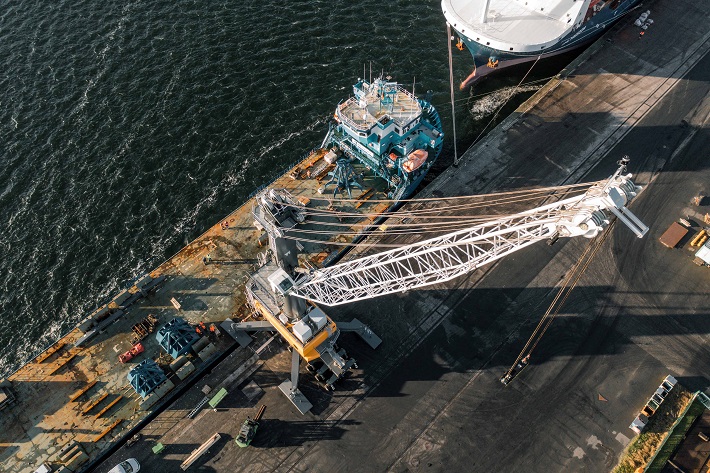 Liebherr is celebrating the 300th delivery of its LHM 550 mobile harbour crane to one of Poland’s largest port-handling operators.

Port Gdańsk Eksploatacja S.A., based in Gdansk, recently took delivery of the 300th LHM 550. For the company, it is one of the largest investments in the company’s 30-year history.

The crane supplied has a boom length of 48 metres and a lifting capacity of up to 104 tonnes. The new LHM 550 will primarily be used for bulk handling of coke, coal and scrap metal.

“We greatly appreciate the extraordinary mobility of this machine,” said Radosław Stojek, board chair of Port Gdańsk Eksploatacja.

“We trained our crane operators at an early stage and carried out extensive modernization measures in the port area in advance so that we could use the machine as quickly and as efficiently as possible.”

The delivery of the first LHM 550 to Kuwait in 2010, marked the beginning of a Liebherr success story. As the most popular crane type in the Liebherr mobile harbour crane portfolio, the LHM 550 has contributed significantly to Liebherr’s market leadership in the MHC market, which has lasted for more than 10 years. In every year since its market launch, a double-digit number of  cranes  have been delivered worldwide. In terms of sales per country, India leads the ranking with 23 units sold, closely followed by Italy and the United States. In the 2021 sales year alone, 26 models were sold worldwide.