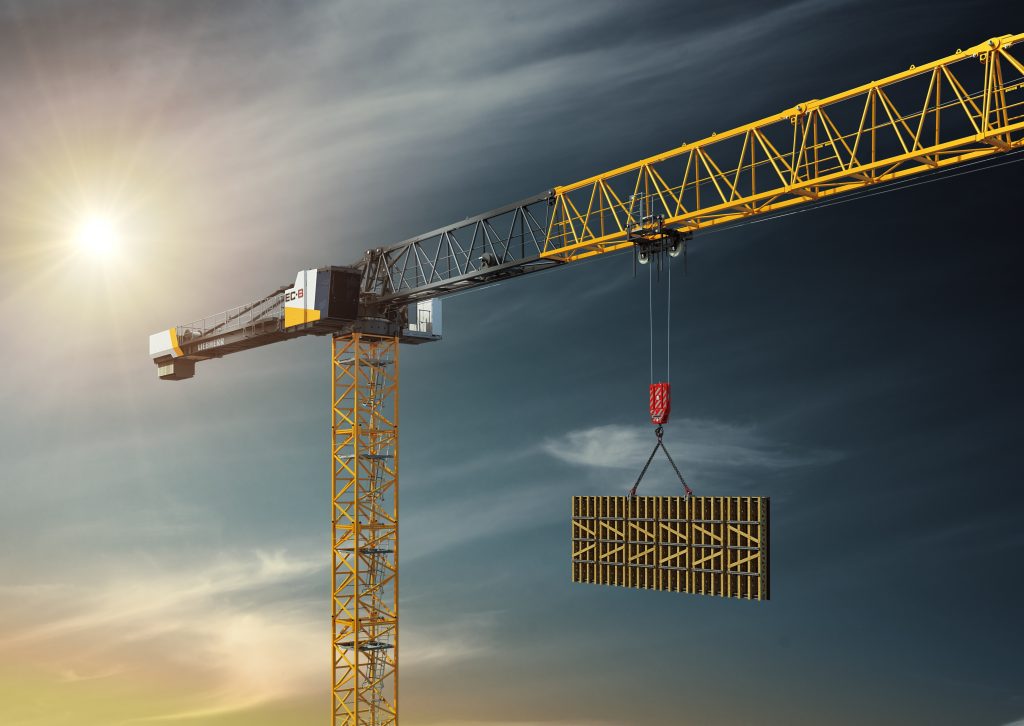 The new EC-B series from Liebherr sets new standards in terms of performance and design.

Liebherr presents a new Flat-Top series at Bauma, the construction machinery trade fair in Munich. Three of the eight units are equipped with fibre rope and therefore have ‘fibre’ added to their product title. Fibre rope has a four times longer service life than steel rope and enables fibre cranes to work with a significantly higher load capacity. In addition, handling is noticeably easier compared to steel rope.

The first eight units of the new series already cover a wide range of services – from small city to large handling cranes, it’s all there. As a result, the maximum load capacities range from 6 to 16 tonnes and the maximum jib head load capacities range from 1.6 tonnes to 2.8 tonnes – working at a maximum radius. At full jib length, the units are among the largest in their class. The 125 EC-B 6 itself reaches a proud 58 metres. The two largest cranes in the series, the 340 EC-B 12 and the 370 EC-B 12 Fibre each have a reach of up to 78 metres. In addition, all cranes are optimized for assembly.

When developing the new series, the construction machinery manufacturer also focused on the comfort of crane operators and safety on the construction site: The new LiCAB cabin is significantly larger and also has a greater field of vision. In addition, the new top-slewing cranes have a new, central control element: a multi-touch display. Last but not least, a new design with integrated advertising panels guarantees an improved impact over distance.

The Bauma Innovation Award judges are impressed: The 370 EC-B 12 Fibre is among the finalists in the ‘machine’ category.

Fibre cranes – models with fibre rope feature
Particular highlights of the new EC-B series are the 240 EC-B Fibre and 370 EC-B Fibre cranes. These are equipped with soLITE high-tensile fibre rope, which has been developed over a period of 10 years by Liebherr and the rope manufacturer Teufelberger.

As well as the fibre cranes offering up to 20 percent more jib head load capacity when compared to cranes using steel rope, fibre rope also has a four times longer service life than steel rope. As the fibre rope only weighs around a fifth of steel rope, reeving the hoist rope is also significantly easier in terms of handling. In addition, maintenance is less complicated as the fibre rope doesn’t need lubrication.

Operational safety is also noticeably increased: The different elements of the rope’s outer layer wear out at a different pace – the crane operator knows it’s time to replace the rope when the red layer underneath the sheath becomes visible.

Increased comfort for crane operators
Size matters: With more than two square metres of space, the new cabin has more room than any EC-B cabin before. Because of its larger field of vision, crane operators have a better overview of the construction site – a crucial aspect for site safety.

As well as ergonomically positioned operating elements, crane operators will find a variety of storage options and surfaces – including details like a cup holder. As well as this, the new cabin has several power sockets to plug in small electrical appliances such as a kettle or radio equipment. In addition to the standard 230 V sockets there are also USB interfaces to provide power for items such as smartphones. Speaking of smartphones: It is also possible to make phone calls via a hands-free system using Bluetooth and to play your own music.

The new display makes the operation of cabin and crane functions much easier and more intuitive: The new 12-inch multi-touch display ensures all devices in the cabin are networked together. This means that all control settings such as scaling via the newly developed scaling assistant, setting the enhanced ABB operating-range limiting system and using the trolley camera can all be done via the display. Comfort functions such as air conditioning, radio and windshield wipers are also controlled centrally via the new display. Whenever there is an update available for the Tower Crane Operating System, this is indicated on the display and can be loaded with a single tap of the finger.

Eye-catching and modern: a new design with larger advertising panels
The now widely recognized bi-colour design of Liebherr tower cranes has been applied to the new EC-B series. Upon customer request, the yellow sections can be easily and cost-effectively adapted to the respective company’s colours.

The advertising panels are twice as large as previous options – without any loss of assembly height. For example, the 340 EC-B 12 and the 370 EC-B 12 Fibre both offer customers an additional 8.5 m² of advertising space for company logos and advertising slogans, with the additional option of lighting.

Optimized structural steelwork: smaller, lighter, even more performance
Several details at the top of the crane have been optimized for transport and assembly: The new EC-B’s compact head, jib and trolley are lighter than their predecessors. In addition, the jib is now so narrow that three jib sections fit onto a truck bed. Compared with similar Liebherr cranes, even the shortest jib requires one whole transport truck less – and at least two less at maximum radius. This saves both time and money. The new cranes have also been designed with optimized quick assembly connections for jibs and counter-jibs, to make assembly even easier and, above all else, safer.

The new EC-B series makes optimal use of the tower systems’ performance capacity. Even the currently largest, new EC-B, the 370 EC-B 12 Fibre, works using the 21 HC 290 tower system with corner posts measuring only 2.1 metres. This is particularly interesting as it is one of the most widely used Liebherr tower systems.