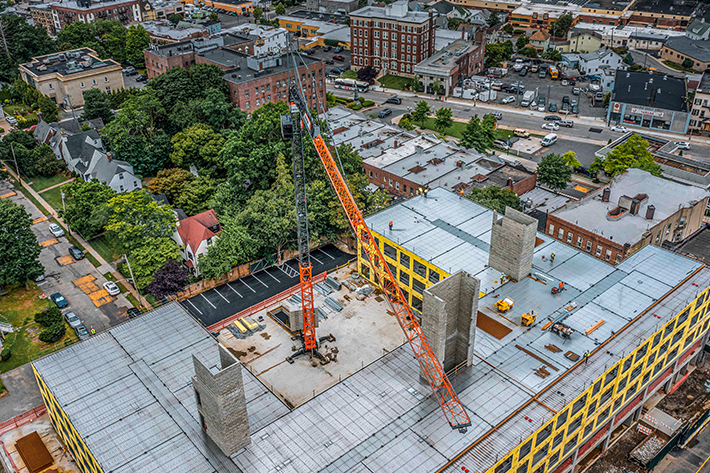 Liebherr's fast-erecting crane is positioned on the third floor so that its jib can reach every part of the site. Photo: Liebherr

Liebherr’s new 125 K fast-erecting crane is working on the construction of an eight-storey residential building in the New York metropolitan area.

The set-up on site is unusual in that assembly engineers didn’t erect the 125 K on the ground, but on the third floor of the building instead. This means there is no need for a recess in the floors of the podium to accommodate the tower of the crane. The 125 K is positioned on the third floor in such a way that all areas of the site are reachable.

The 125 K, largest of Liebherr’s K series, is high enough to be able to rotate above a neighbouring crane – a Liebherr 316 EC-H is currently working on a different project on a site nearby. Due to its higher position, the 125 K towers over the 316 EC-H by almost seven metres.

Lifting concrete components and placing structures made of steel are two of the tasks performed by the 125 K on the 25 Maple Avenue development project in New Rochelle, N.Y.

This project entails an eight-storey building with more than 180 residential units, around 1,900 square metres of commercial space and a multi-storey car park. Extreme Construction Inc. is responsible for the structural and interior work. The project is scheduled for completion in 2022.

The crane, which has a custom paint job in black and orange – Extreme Construction’s company colours – has a jib length of 55 metres and a maximum lifting capacity of 8,000 kilograms. The hook height for this particular site is just under 37 metres.

“Using this crane allows us to perform all the required lifting on site. The heaviest lift has been around 4,000 kilograms,” says Daniel Bossi, managing director of Extreme Construction. The auxiliary crane, a Liebherr LTM 1350 mobile crane, lifted the folded 125 K to the third floor and will also bring it down again once the project is complete.

The crane has a “Load Plus,” option, which increases the lifting load by up to 20 per cent at the push of a button.

The cabin can be assembled without the need for additional tools. This also applies to the crane itself. With rope kinematics, the crane unfolds with the support of its own drives.