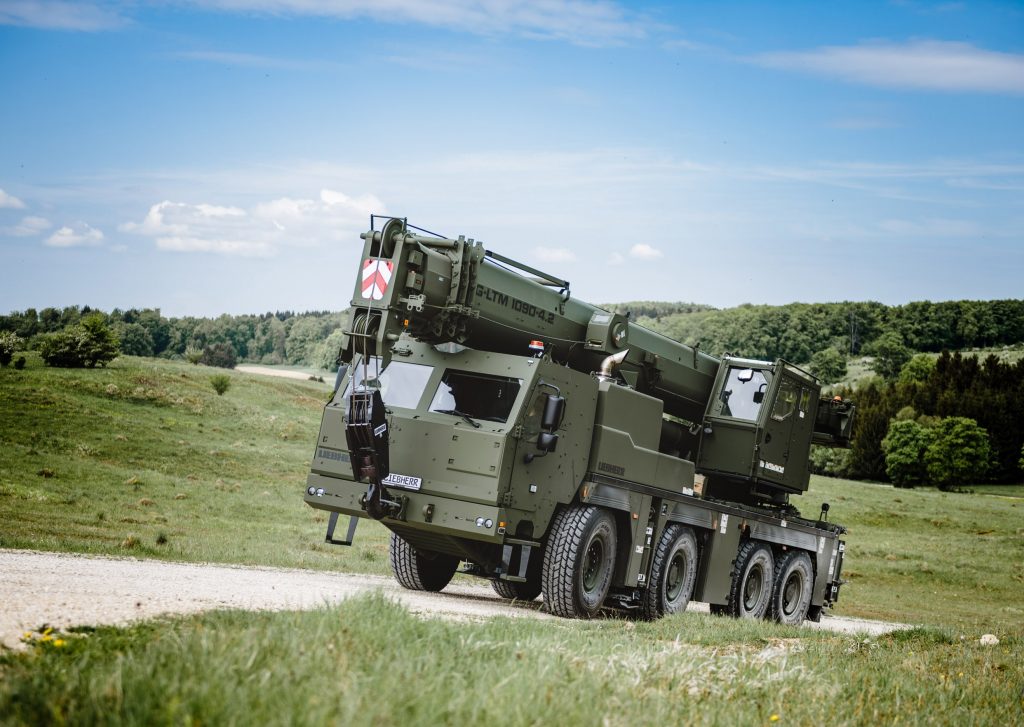 Liebherr-Werk Ehingen GmbH delivered the first mobile and recovery cranes from its current large order from the German Army on schedule in February.

In June 2017, Liebherr received an order from the Federal Office of Bundeswehr Equipment, Information Technology and In-Service Support (BAAINBw) to deliver a total of 71 armoured mobile and recovery cranes worth around 150 million euros.

The order comprises the delivery of 33 armoured recovery cranes with the model name G-BKF and 38 G-LTM mobile cranes, which also feature armoured drivers’ cabs and armoured crane cabs. The deliveries are scheduled to be completed by the end of 2021.

G-BKF recovery crane
The G-BKF from Liebherr is an armoured recovery crane on a standard four-axle mobile crane chassis. It has excellent off-road capability and great manoeuvrability. Its two recovery winches and a towing hitch at the rear enable it to rescue and tow a wide range of different vehicles such as the new generation of armoured control and command vehicles, armoured transport vehicles, MULTI FSA (swap body vehicles) and wheeled vehicles which are already in use whilst the operating personnel is being guarded. The G-BKF can be used flexibly and economically since it is equipped both to recover vehicles and to hoist loads. Its 20.9 metre telescopic boom enables the G-BKF to handle loads of up to 20 tonnes quickly and precisely.

G-LTM armoured mobile crane
The G-LTM ordered by the German Army is based on a standard four-axle mobile crane with an armoured driver’s cabin and an armoured crane cabin. Its all-terrain chassis features the latest chassis and drive technology, which ensures excellent handling, even on difficult terrain. A six-cylinder Liebherr diesel engine in the chassis, which delivers 330 kW and a torque of 2335 Nm provides the G-LTM with all the power it requires. It has a 35.7 metre telescopic boom and a recovery winch at the rear. The order from the German Army comprises 17 G-LTM cranes with 8.4 tonnes of counterweights known as “Heavy duty mobile cranes” and 21 units of the same model with 22.5 tonnes of counterweights with the designation “Very heavy duty mobile cranes.”

High personnel protection requirements
The focus when the order was placed was on the protection of personnel in the cranes. Liebherr-Werk Ehingen GmbH worked with Rheinmetall, the leading European supplier of military equipment, on the armoured driver’s cabs and armoured crane cabs to ensure that the high requirements could be satisfied. The drivers’ cabs protect the crew from ballistic, mine and IED threats and also feature an NBC ventilation system. The superstructure cabs protect the crane operators from ballistic threats during crane operations. The two cabs are identical for the G-LTM and G-BKF vehicles.